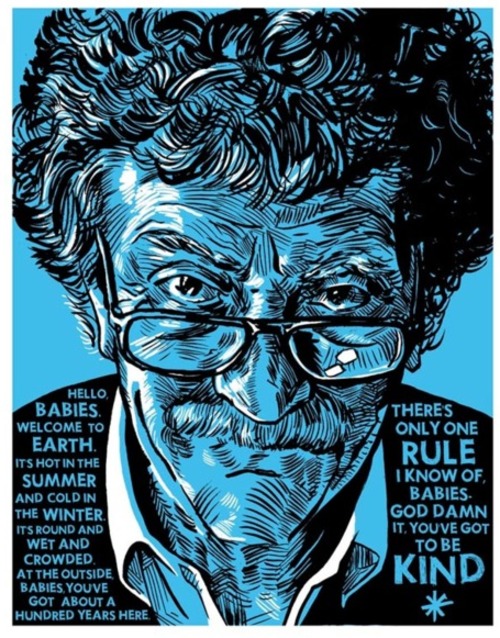 Originally, this Day was a day to honor our universal wish for peace, and to remember the horrors of war. Now, this day is about sales and honoring war, and warriors. Let us remember that true warriors hate war, and love peace, and let us honor warriors by bowing our heads in silence as we remember that all beings on this Earth are one family. ~ ed.

It was during that minute in nineteen hundred and eighteen, that millions upon millions of human beings stopped butchering one another. I have talked to old men who were on battlefields during that minute. They have told me in one way or another that the sudden silence was the Voice of God. So we still have among us some men who can remember when God spoke clearly to mankind.

So I will throw Veterans’ Day over my shoulder. Armistice Day I will keep. I don’t want to throw away any sacred things. — Breakfast of Champions

And, from Mother Night:

“Oh, it’s just so damn cheap, so damn typical.” I said, “This used to be a day in honor of the dead of World War One, but the living couldn’t keep their grubby hands off of it, wanted the glory of the dead for themselves. So typical, so typical. Any time anything of real dignity appears in this country, it’s torn to shreds and thrown to the mob.”

Then she turned to me, let me see how angry she was, and that the anger was for me. She had been talking to herself, so what she said was part of a much larger conversation. “You were just BABIES then!” She said.

“You were just babies in the war — like the ones upstairs!”

I nodded that this was true. We HAD been foolish virgins in the war, right at the end of childhood.

“But you’re not going to write it that way, are you.”

This wasn’t a question. It was an accusation.

“Well I know. You’ll pretend you were men instead of babies, and you’ll be played in the movies by Frank Sinatra and John Wayne or some of those other glamorous, war-loving, dirty old men. And war will look just wonderful, so we’ll have a lot more of them. And they’ll be fought by babies like the babies upstairs.”

So then I understood. It was war that made her so angry. She didn’t want her babies or anybody else’s babies killed in wars.

Cat’s Cradle is actually Vonnegut’s best when it comes to remembering wars and those who fought in them:

“I am about to do a very un-ambassadorial thing … I am about to tell you what I really feel. … We are gathered here, friends … to honor [the Hundred Martyrs to Democracy], children dead, all dead, all murdered in war. It is customary on days like this to call such lost children men. I am unable to call them men for this simple reason: that in the same war in which [the Martyrs] died, my own son died. My soul insists that I mourn not a man but a child.

And I propose to you that if we are to pay our sincere respects to the hundred lost children of San Lorenzo, that we might best spend the day despising what killed them; which is to say, the stupidity and viciousness of all mankind.

Perhaps, when we remember wars, we should take off our clothes and paint ourselves blue and go on all fours all day long and grunt like pigs. That would surely be more appropriate than noble oratory and shows of flags and well-oiled guns. … [I]f today is really in honor of a hundred children murdered in war … is today a day for a thrilling show? The answer is yes, on one condition: that we, the celebrants, are working consciously and tirelessly to reduce the stupidity and viciousness of all mankind.”

Bonus, on the above: