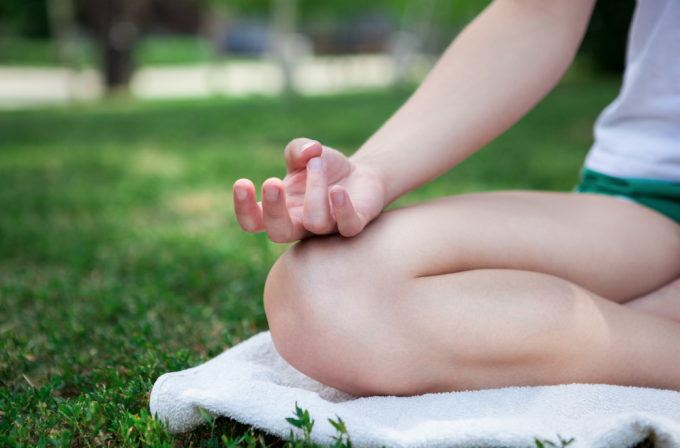 It is hard to recall my first yoga class over decade ago, but I do recall a vague sense of unease before class and later reservations about joining in on the chanting.

After a lifetime of dancing, I stowed away my ballet shoes for college and yoga seemed like an interesting way to stay limber and fit. I was as type A as they come. I wanted to move, to sweat, and even to perform.

To my surprise, I found myself sitting on the floor uncomfortable as could be physically, but more so mentally. My mind was a constant whirlwind and meditation was a novel form of torture. And then the OMing started.

I didn’t know what it meant and it felt a bit cultish to me. On the other hand there was something about the reverberating vibration was deeply beautiful and moving. Part of me wanted to join, part of me was a little weirded out, and part of me timidly recalled my fear of singing in public.

The next class, I resolved to try. It was kind of fun and a bit freeing—like screaming under the train tracks, and oddly competitive. It seemed everyone wanted to Om the longest and the loudest.

In efforts to ease some tensions that others may have about this tradition, I thought I’d explain what Om means and why we do it.

Om has many meanings and many layers. In teacher training my teacher defined Om “as the most ancient and scared mantra” or the “sound of the universe.” In Hinduism it can loosely be understood as the sound of creation. Similar to Christian beliefs, they believe the universe arose out of a void. Life was preceded by the manifestation of consciousness or God as the sound Om.

Om can also be understood as a scared trinity. It is the union of the energies of creation, preservation, and destruction (sometimes called liberation because often we must destroy something before it can be created or built anew).

In Sanskirt, the language of yoga if you will, the syllable Om is called Parnava and is literally translated to “humming.” Pra comes from the root word prakriti which means nature or can be loosely understood as the universe. Nava means boat. Thus Om is the boat that carries you through the ocean of life or consciousness to reach the shores of external truth or self actualization (Shiva Purana 1.17.4).

So why do we do we Om at the beginning and end of class?

The go to answers that you may have heard in class are that it:

2.  Serves to “align body, mind and sprit.” As open as I am to such esoteric and spiritual parts of yoga, the scientist in me likes to base my understanding in tangible evidence or experience whenever possible. So let us return to the physical and the practical.

3.  At the most basic level it is thought that the vibrations produced by Oming, break up mucous in the lungs and help expel dust or microogamsims from the respiratory tract. Similarly this is why we cough when sick. Not the most glamorous of purposes, but practical during the cold and flu season.

4.  Oming may help you help you relax and improve your mood. One study showed the Oming may help us tap into our parasympathic nervous system by activating the Vegus Nerve.

They found that healthy volunteers had decreased activity in most of the limbic system, which is a network of structures in the brain that regulates emotions. These brain regions control a lot of our primal emotions and can be hyperactive in depression and anxiety and the authors suggest that Oming may have some therapeutic potential in these disorders.

5. If you are open to the idea of chakras, it is taught that Oming relates to the third eye or the crown chakra and can help you connect to the universe or the divine.

6.  In general, chanting helps to open the fifth chakra. The fifth Chakra relates to the voice and when “imbalanced” it can cause fear and hesitation that can impair one’s ability to speak one’s mind. In less esoteric language, Oming is an opportunity to take a small risk and be heard.

For some people, this is a big deal and can lead to a major break through in their confidence. For others it is just pushing them a little bit outside their comfort zone and the norms of our society. When we do things that scare us it leads to opportunities for growth.

Most of the time after avoiding something we fear once we finally do it, it ends up not being such a big deal—think crow pose or handstand. Maybe you didn’t nail it, maybe you even fell, but it isn’t like you smashed your face-in or broke an arm. At least I hope not! So much of our fear is an artifact of the mind and has been conditioned by our life experiences.

There are certainly healthy and useful fears that serve to protect us from danger, but more often fear is more subjective and holds us back. So Oming can be an exercise in public speaking and help to break down communication barriers.

7. And if none of that resonates, we chant Om because there is something rich, nourishing, and comforting about tradition and repetition. In beginning and ending every class the same way it helps tap into the relaxation response. Our brains love habits and likes to associate feelings with environmental triggers.

Much like drug users get a natural high from merely seeing drug paraphernalia or being in a room that they frequently got high in, coming into the same space and doing the same thing time and time again helps tell the body what to expect and sets off a chain of physiologic events in preparation for what is to come. In the case of yoga, hopefully this pulls us out of our minds and into a more present relaxed state.