Somewhere in northern New Mexico, I turn left at a bullet-pocked sign that marks the road to Huerfano Mountain.

My passengers are Arnold, a botanist, and Eugene, an artist, both Navajo.  Arnold, wearing a sweat-stained ball-cap, plaid shirt, jeans and tan work boots, directs from the passenger seat. We lurch up the crumbling road, past gypsum hills and pinyons that jut up from the blanched terrain. Inches to the right, the edge drops off into the faded surface of the Navajo Reservation, hundreds of feet below.

On the road ahead, a square trailer dragged by a communications truck gets stuck on a boulder and almost pitches over the edge. Four Mexican guys jump out, push, and the trailer humps forward. Thirty minutes later, we park on a plateau studded with towers. Some rise more than 50 feet, all metal and right angles, into the shapeless sky. The trailer is propped open and the laborers gather tools for maintenance. Leaving the towers, we head up the ridge; flattened ovals of beige rock that look like enormous fry breads stacked atop each other. We shimmy through brittle crevices crawling with neon lichen, past broken glass and sun-faded beer cans languishing in overhangs with nice views.

Arnold moves with the slow-motion saunter of a bear. I’m running to keep up. He stops before a gnarled pinyon and prays. Eugene does the same. I hang back.

He tells me to take whatever I have in my pocket and put it under the tree. I have car keys, which I need, and Chapstick, which seems more like litter. Scouring the ground, I find a smooth, white rock and nestle it into the sand at the base of the tree. I whisper a prayer and run to catch up with Arnold.

When I find him, he’s standing next to two large, conical holes in a wide, flat rock. The depressions are about two feet wide, three feet deep and appear to be fashioned by giants.

“This is one of the most sacred places on the Navajo Reservation,” Arnold says. He instructs me to walk clockwise around the holes.

I circle them clockwise and stare out at the desert. It’s noon in October. The sky is light blue and a layer of brown haze coats the eastern horizon. The smog, courtesy of two of the country’s largest and dirtiest power plants, the Four Corners Power Plant and the San Juan Generating Station (both plants are now currently facing major changes to comply with environmental protection measures) is most visible on calm days like this one.

Eugene stands on a nearby rock and stretches his arms out to the sky. He’s waiting for me to snap his photo.

“The Navajo people came out of a hole in the earth over there,” Arnold says, waving vaguely to the left.

I strain to see something otherworldly but I just see rocks. I try to feel sacredness but I just feel the soft wind on my face. We cross the ridge and climb up to a cluster of small microwave towers. One rests on its side, dangling by wires. I suppress an urge to topple the others. It’s the equivalent of putting a cell tower on the Temple Mount. “Some people do that,” Arnold says, smiling.

We stand on the edge and look West towards Shiprock. Below, the gradients of time are visible—beiges, pinks, grays, blacks, falling away from our feet into a maze hoodoos.

I thought life would somehow make sense up here, from this plateau where prayer and technology co-exist. But trying to fathom the desert is an exercise in futility. 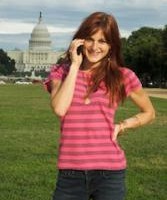 Caroline Treadway is a professional freelance photographer and writer who shoots editorial and commercial work, including photojournalism, sports, portraits and weddings. She … Read full bio