Love Lessons from a Romantic Grandfather. 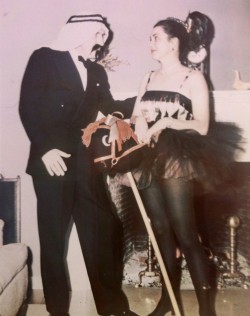 “Love is a smoke made with the fume of sighs, Being purged, a fire sparkling in lovers’ eyes, Being vexed, a sea nourished with lovers’ tears. What is it else? A madness most discreet, A choking gall and a preserving sweet.“

I was blessed to have known an exceptional couple who had an incredibly deep and sensual romance that lasted a life time—and they happened to be my grandparents.

This is actually more about my grandfather, his philosophies and his love for my grandmother—but to write of him is also to write of my grandmother, because they were inseparable. The fabric of their bond could never be teased apart by even the finest tooth comb.

Some may wonder if people are capable of sustaining burning love for one another throughout their long relationships. No matter what one’s beliefs are, reading about this flirtatious, loving couple who shall always be near and dear to my heart will hopefully be inspiring.

My grandparents were great conversationalists who loved to travel, play a board or card game, entertain, joke and have fun, but mainly they loved doing all of these activities together. Their bond was so strong; one could tell by merely looking at the way they gazed at each other or were in constant physical contact, how much they cared for one another.

In every photo I can find of the two of them, even when there are other people between them, they are always seen looking toward each other. And why would they ever bother to look at the camera (or anyone or anything else for that matter) when they would rather be looking toward the other half of their souls? 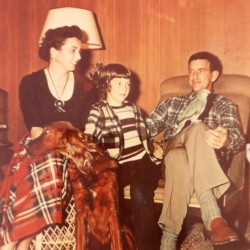 My grandfather was an architect by profession, but he was also an artist of just about every genre. He was a man of many hobbies, one of which was learning all about the cultures and religions of the world and he especially loved the Greeks. There were paintings and sculptures of fantastical creatures and Gods all over my grandparent’s home. He was like a sponge that couldn’t absorb enough knowledge about his beloved Greek Gods.

An aside on his mindful feelings concerning the ancient Greeks:

My grandfather explained to me once that while some people love the Classic Myths, others can’t stand them. He felt that they represented the most beautiful form in which the adolescent dreams of mankind are expressed.

He thought that while our dreams are certainly wide-ranging, that when we read the Myths that we would get a clue as to what would happen to us when we “followed our stars.”

Explaining further, he said that the Hebrews and Romans had a different approach as they enforced Commandments (to keep you out of trouble with God) and Laws (to keep you out of trouble with your neighbors). He never seemed to be a lover of strict rules and because the Greeks were more hang-loose and artistic, in a hipster kind of a way, he found them to be right up his alley.

He believed that what they lacked in orderliness was made up for by what they gained from their philosophies that they used as guides to live their lives by and he allied himself with their way of thinking and felt that someday he would maybe be able to, “figure out what it is all about” if he could only understand their philosophies enough.

At one point he wrote an illustrated book of poems about the Greeks that was merely for his own self gratification. It was never published, save for 10 copies that he made for himself and those close to him.

I am one of the lucky owners of one of those books and in it I found something incredibly special.

I was reading a clever poem about Baucis and Philemon and looking at the sketch that he had drawn that accompanied his prose. The two trees were included, as one would expect given the story that inspired him, but in the trunks of the trees, he had drawn the profiles of himself and my grandmother looking at one another as part of the bark. 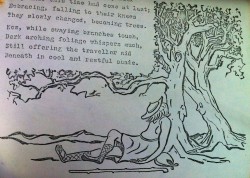 The sketch is in keeping with every photo or memory that I have of my grandparents. And this is particularly special, as it was memorialized with the poem that he wrote about a story of lovers, which would have had deep meaning for my romantic grandfather—a man who, throughout his lifetime, always introduced my grandmother as his bride instead of his wife.

I wanted to share a little of the inspirational goodness and pure love that my grandparents gave to me through observing them live out their deep and oh-so-romantic connection.

I hope that, through his wonderful poem and sketch, others might soak up even a drop of the love that I was so privileged to have known.  I happened to share this at my grandmother’s memorial and there was not one dry eye in the house.

No other riches had this pair,
Save golden hearts and silver hair;
But strangers knocking at their door,
Could share both roof and meager store.

Baucis noticed as they supped
The cups of wine kept filling up;
Aware, though fearful, yet elated:
Great Gods were these on whom they waited!

The Gods, discovered, gave a boon
To these two with hearts in tune;
Their wish, so simple and sublime,
Was when it came their time
To make an exit from this life,
They’d leave together man and wife.

When many happy years had passed
They knew this time had come at last;
Embracing, falling to their knees
They slowly changed becoming trees. 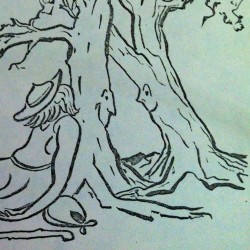 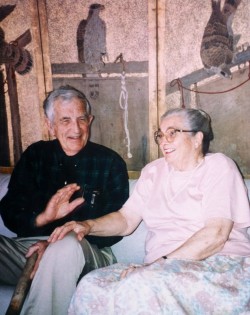 Photos: Courtesy of the author.