Slow Down & Listen to Your Heart in Love. 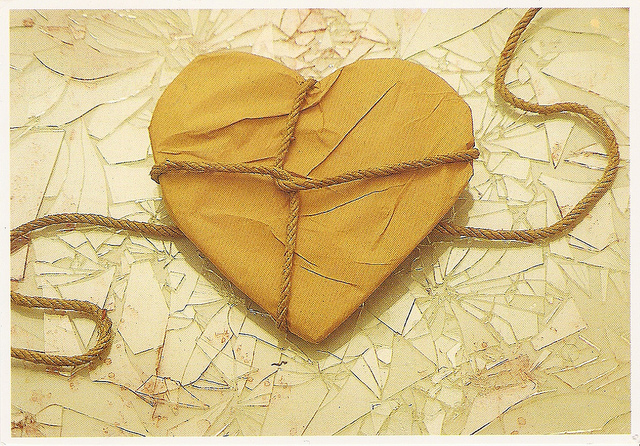 New love deprives us of reason.

It’s a biological imperative. Nothing matters except what He or She is doing, when we’ll see them, touch them, and kiss them again.

Here, we are swollen and flammable, ready to burst into flames at the slightest friction, like a whisper in our ear or a long look. We feel fully alive, and are probably not really doing a lot of critical thinking, because who does that when they’re in love?

Love is supposed to carry us away, take us out of ourselves, and transcend tedious rules and boundaries. We canonize fictional characters who risk everything for grand passion: Heathcliff, Romeo and Juliet and Anna Karenina. Caution goes against everything we feel and everything we’ve been taught, and we really want nothing more than to be consumed by the live spark we’ve found in the eyes of a lover.

Still, I’m going to say this: slow down. I’m going to say it because of a young woman I know whose live-in boyfriend just disappeared, leaving her with a lease, a bunch of bills and a child who had also fallen in love with him.

It’s not bad that they fell in love; that part was wondrous. The problem lay in conflating sexual chemistry and novelty with character, solidity and depth.

The problem was a kind of desperation to “seal the deal” because of insecurity, desperation, and maybe a belief that ‘the One’ had to be caught, chloroformed pinned and mounted so it didn’t get away.

I’ve done it myself. In my late twenties I was madly in love with a big, handsome moron. I had already broken up with him once, but when I ran into him again I got all swept up in his wide shoulders and the smell of his hair, and I was done for. I was in love with him, and I couldn’t believe that someone who looked like him wanted to be with someone like me.

I wanted to be sure. The August before I left for my second year of law school, I tried to get him to talk about our future. “If you want,” he finally said, “we can pick out a silver pattern when you’re home for Christmas. Does that tell you how I feel?” I told everyone I knew, and spent hours imagining weddings, houses, and children.

In October he quit his job, moved out of his apartment and sent a letter saying that I shouldn’t try to find him.

Chemistry is not bad, and sometimes that “this is the one” hunch is right. It was for my parents, although they had to wait for years until they could actually get married. It was for my husband and me. That took a while, too, but once we were together we were…together.

So the issue is not the falling-in-love-losing-your-mind part. The issue, I think, is in rushing things and ignoring ones’ own relationship sonar. Because really, almost always, you have a clue. You may ignore it because the sex is amazing, or you can’t believe someone so great is with you, or it’s been a long time, or you’re desperate, or some combination thereof.

I knew that Disappearing Man was never going to be a good match for me culturally or intellectually, and I noticed that he never brought up the subject of a future together. In fact, after a few weeks he didn’t initiate anything, although he always went along for the ride. The young woman left with the lease and the bills may not have noticed anything wrong, but that was because she was willfully ignorant, unwilling to let a few inconsistencies and incompatibilities cloud her vision of domestic perfection.

We may not know how to still our minds, center ourselves and listen. I didn’t, all those years ago, and I know my young friend doesn’t.

We may know exactly how to do that and choose not to. Because we feel so damned good, because we love someone enough to get past anything, because we’d rather be with them and be a little unhappy than be without them. Because why would we stop and look for problems when we are gloriously happy?

The goal is not to look for negatives. The goal is to love big and juicy and joyously, feeling all the feels and savoring everything. Rushing nothing. Enjoying the ride instead of pushing towards some milepost that looks like safety and the end of loneliness. Checking in with your heart.

Because honestly, if it’s going to become a committed, long-term relationship, slowing down is not going to change anything. (A slow burn is just as wonderfully sexy-tingly as high heat). There’s a lot to be said for taking ones’ sweet time before living together, or merging finances or offspring.

Heartbreak, betrayal, confused children, and ruined credit are neither sexy nor romantic. It just all feels like the end of the world. Even plain old “how could I have been so stupid and everybody knows” without the other complications feels pretty terrible.

So maybe slow things down, inhabit every moment fully, and take in everything from the narcotic rush of lips on your neck to the bitter residue of a disagreement. See what you really see, without spin or embellishment. Expect nothing, be open, trust your wise heart and take delight in what is delightful.

It may be that you have, indeed, found a long-term partner and that beneath the shiny surface of infatuation and fascination there grows something real, deep and strong enough to last.

It may be that your tender heart gets broken, and you are sad but not shocked because you kind of knew it wasn’t a great fit. (You knew that because you were paying attention).

And either way, you move on to whatever comes next without the need to untie knots tied during moments of blindness.

You may suffer (you will suffer) but your heart, your truest compass, will always serve you well if you slow down, find your still center and listen.