What About the Hens? A Feminist Perspective on Factory Farms. ~ Kate St. John 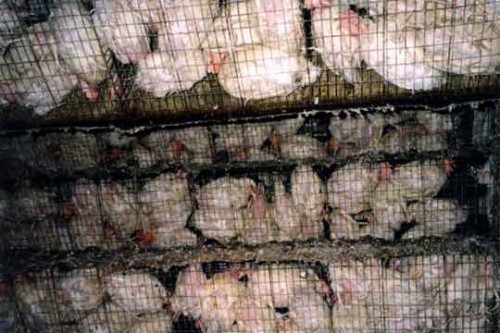 “In our world view, the sacredness of all life is central.  Oppressed groups identify with other oppressed groups and animals have always been on the bottom of that oppression”

This past week was International Women’s Day and it has had me thinking a lot about Women’s rights. From the suffragettes to new wave feminism, there have been evolving definitions regarding what it means to be a feminist and what the spectrum of women’s rights should encompass. As a woman and animal rights activist, I would like to see the feminist movement widen its circle of compassion to other species as well.

There is no doubt that on today’s modern day factory farms, all animals (male and female) will live with some amount of abuse and suffering. It is however, unfortunate that most female animals on these farms will experience the most prolonged amount of suffering such as physical and emotional violations.

It has been argued that modern day egg laying hens suffer more than any other animal on today’s factory farms.

285 million hens are raised for eggs each year in the United States alone. The majority of those hens are raised on battery cage farms. These farms are actually giant, windowless sheds that can house up to 500,000 hens without an opportunity for the hens to roam or walk freely. These hens are living in small wire cages with an average size of a filing drawer that are stacked on top of each other. And sadly, several chickens are crammed into each one.  As a result, the small space leads to unnatural behavior such as severe pecking and cannibalism.

The industry finds it easier to clip their beaks and toes, rather than improve the space and living conditions. These hens will never see day light and they are unable to even expand their wings as the cage space is so crammed and small. They will never experience what it is like to breathe fresh air or feel dirt or grass between their toes.

The life expectancy of these hens is only 2 years, a mere fraction of their natural life span. Once these hens have literally exhausted themselves from egg production and the stress of cage life, they become “spent” and are sent to slaughter.

Speaking out for animals raised for food is still met with resistance and not taken seriously enough within the various social justice movements. We are living in a culture that has made animal exploitations not only accepted but also the norm.

Author and activist Karen Davis of United Poultry Concerns covers this issue and many others in her book;Prisoned Chickens Poisoned Eggs: An Inside Look at the Modern Poultry Industry. Davis states:

“We are told we are being “emotional” if we care about a chicken and grieve over a chicken’s plight. However, it is not “emotion” that is really under attack, but the vicarious emotions of pity, sympathy, compassion, sorrow, and indignity on behalf of the victim, a fellow creature—emotions that undermine business as usual. By contrast, such “manly” emotions as patriotism, pride, conquest, and mastery are encouraged.”

Should feminism and the plight for women’s rights cross over into the plight of other species such as egg legging hens? And if so, what about all female animals that face abuse and oppression on modern day farms?

If we look into what the hens are actually experiencing it will open our eyes to the other abuses that female animals endure on factory farms. Can we accept the abuses that female pigs and cows face on these farms? Could we bear to watch pregnant sows on pork farms trapped for months in tiny gestation crates? Could we accept that female cows are forced into pregnancies, have their babies stolen from them right after birth and are milked until they are “dried up” only to end up on a truck to slaughter to become cheap hamburger meat? How can we allow our fellow female earthlings to endure this humiliation and suffering and how can we work to stop it?

One way we can help to reduce this suffering is to leave animals and animal byproducts off our plate’s altogether. We can walk away from supporting an industry that creates so much agony and that also wastes so many resources.

Or we can become more conscious about our food choices and also reduce the amount of animal products we consume. Whatever steps we can take to reduce suffering are good steps. We are seeing progress as new laws pass in the Agriculture industry, but as we all know change takes time.

I think the best thing we can do as compassionate women, is to be more aware of what we consume and ask ourselves if we really need to be consuming it? What is the true cost of our meal choices and can we see the sameness that we share with other fellow female species? The same desires to be free; to feel safe; and to love our offspring in a natural way? Don’t we owe it to them to speak up and to fight for their rights like we would for our own?