11 Classic Song and Dance Numbers to Get the Happy Going. {Videos} 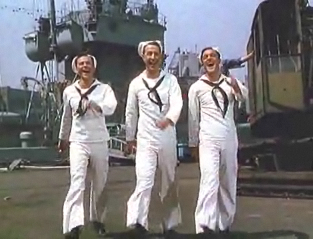 “Dancing is a vertical expression of a horizontal desire.” ~ Robert Frost

Isn’t it, though? Dancing is therapy, it’s expression, it’s freedom, it’s lightness and strength and courage and there’s just nothing like watching (or feeling) the hard work of dance appear so effortless.

Just to warm us up:

Bollywood does it like it’s just regular old breathing (and deserves its own article), but since I was weaned on the Hollywood side of things, I’ll admit that my selection of perfectly awesome show tunes and dance numbers are distinctly of the American variety.

If your day needs a kick start, or you want to wax nostalgic while gazing dreamy-eyed at the very dreamy Gene Kelly, or if you want to simply be blown away by what our bodies can do, these clips are for you.

“Dance, when you’re broken open. Dance, if you’ve torn the bandage off. Dance in the middle of the fighting. Dance in your blood. Dance when you’re perfectly free.” – Rumi

Had to be done. It’s The Wizard of Oz!

This one might as well be my prepubescent (and maybe a little bit of post-pubescent) years.

I like Dr. Dreamy best as Ronald Miller, who nerds his way into inventing a dance craze.

You will. You’ll laugh, and be bowled over, and fall in love with two dancers at once.

Okay, we can’t ignore how he dances with Cyd Charisse, who really knows how to shake her booty:

Danny Zuko was never really the one that I wanted, but I can watch this a million times. And I have. I’m happier as a result every time.

Nonsense, when done Charlie Chaplin style, is nothing short of everything.

We’ve already seen and fallen in love with Donald O’Connor in “Singing in the Rain.” Now we can fall in love with him all over again. For real this time, as he drunkenly sing-dances about the perils of love.

I hate to pick favourites, but I saved the best for last. Acrobatics! The Ross Sisters! Three wows in one. Just watch.