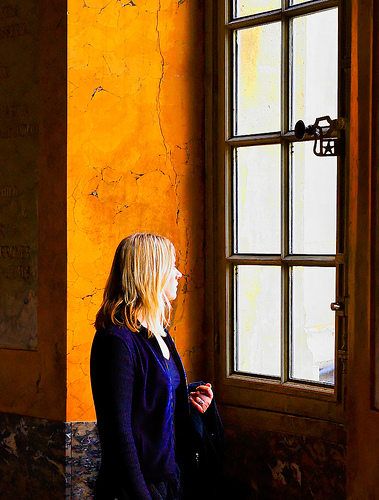 I associate it with a woman who isn’t strong enough to stand up for herself, and allows herself to fall victim to such treatment.

Physical or emotional; both incredibly damaging to the soul, pride, and the human body itself. Abuse is weakness that has been taken advantage of.

In my mind, it’s a person who doesn’t know any better and continues to allow themselves to become more hurt, more belittled, and a bit more broken every day.

These things are much more damaging to humans than a welt, bruise, or scratch.

Waking up in the morning after a breakdown “session,” which consisted of crying until I couldn’t open my eyes, curling up in the fetal position and screaming as loud as I could to drown out the insults and the shame coming from my partner, was the worst feeling I think I could possibly feel.

Waking up next to the person who was responsible for my real-life nightmare, but having them put their arm around me and whisper “I love you so much, we can work though this together,” does something to a woman that is inexplicable, horrifying and equivalent to a blow, not to the gut, but the heart.

I was broken down emotionally, beaten to the consistency of a pulp, and told that life will go on and “it’s just what couples go through.”

Not only did life go on, but he promised me a house on a lake, a car and even to help pay for my furthering education, that I absolutely could not afford on my own.

Why did I stay so long?

What convinced me that this was acceptable and things would, one day change?

And more importantly, why were all of those things that he was promising in the future so much more important to me than my pride, self-esteem, and happiness?

A useful tool that can be utilized in a thousand different ways.

Some people are master manipulators. I fell in love with one without realizing it and paid the price.

My therapist recently informed me that the first thing she wrote down about me was “low self-esteem.”

Something, somewhere along the way, had gone horribly awry.

I travel, I’m educated, I can hold an intelligent conversation in three different languages, and I’m not horrible to look at. I have my own thoughts, opinions, and rarely bite my tongue when I have something of substance to contribute to any discussion.

During my travels I was fearless of falling victim to crime or danger, and I’ve had my fair share of failed relationships, but nothing that has bruised me as much as this one.

This one was a life-changer.

The day I said “I love you” back to him was the day I subjected myself to my first emotional bootcamp. No. Emotional cruel-and-unusual-punishment is more appropriate, since bootcamp usually has a positive outcome.

I started telling myself that everything I did in the past was wrong, and the only positive decision I could make to atone for those “bad” decisions was to live this life that was being offered to me.

Yes, it takes me a very long time to let my guard down, and according to him, those two things were only the tip of the iceberg of everything I’ve ever done wrong.

“But don’t worry,” he said. “I will love you no matter what your past is.”

And the magic words: “I will stick by you no matter what, I know you’re the one for me.”

Everyday I trained myself a little more to pretend that our relationship was perfect to everyone else, even though I had a small molecular thought that maybe I deserved someone who empowers me, who wants to talk about my past experiences and is proud of having someone by their side who has done so much with their life in 27 years.

There were doors kicked down, spit in my face, harassment, and physical restraint.

I felt the constant pressure to change who I was, complete impossible tasks, and comply to endless ultimatums.

I thought it was love.

Every relationship has it’s bumps in the road. It hurt every day to live, and where did it end? It wasn’t love. It was control, wearing the plastic Mardi Gras dollar-store-version mask of love.

Separating myself and recovering has been surprisingly difficult. I have been re-evaluating so much of what I thought I had figured out about myself.

I am finding out the difference between who I truly am and who I think I am. Come to find out, there’s a pretty big gap there.

Am I weak? Absolutely not.

Now, I am stepping out onto the stage, accepting who I was, who I became, and being proud of the woman I am.