Ask Anthony: Can I Teach in Lululemon? Anthony is pretty much an expert on everything.

I am a yoga teacher, and conflicted. I can’t stand the consumer culture that has grown around yoga, but my ass looks fantastic in Lululemon. (And I mean fantastic!)  Can you help?

My ex was a yoga teacher. She was fictional, but no less real for it. She wore Lululemon pants. She was perfect in them.

She used to send me handwritten texts. One time, she sent a text that said she felt super spiritual in Lululemon. I felt as if I had received some kind of a message. She really loved the new see-through ones.

She said that her pants were a part of her and that being translucent, they were a reminder of impermanence. When Chip Wilson said that not every body was right for Lululemon, she agreed completely. She said she loved what the pants did for her, but they simply wouldn’t do anything for, say, a girl with a buzz cut—she wore hers as a hair band.

Chopsticks, bangles, tiny bells, bars, clips, barrettes and glitter were also involved. Once I saw a little tree up there. Her hair was huge—a bright purple crown chakra explosion. She had a mop that would frighten children and send stray dogs running for cover. One time, we walked around the block and almost lapped her hair. Used as sort of a tie-up/dread-sock hybrid, the pants nearly tamed it. Some stubborn wild tufts always escaped. It was dreamy.

It was so good for me, loving a yoga teacher. Sometimes, she would teach me stuff.

There was a sort of mini lecture series that seemed to keep recurring. I inadvertently took her at-home workshops on how I wasn’t good enough. That woman could use the word “namaste” to mean all kinds of different things. 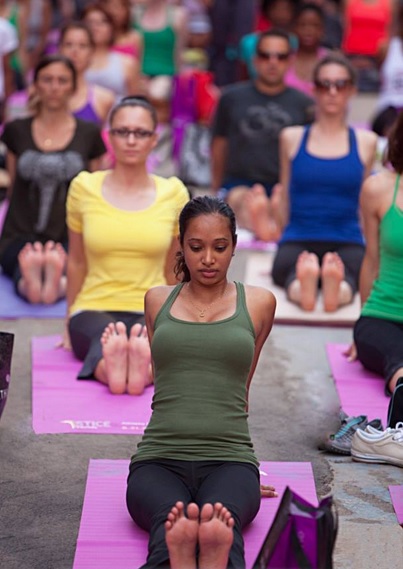 She told me to be more affectionate, but when I brought the yoga class home for a teddy bear pajama party, she was furious. I think that may have been her lineage. She was half Puerto Rican, half Imaginary. I asked her once how her childhood informed her sense of conversational dexterity. She said “just shut it.” She was helpful. She brought me to her optometrist. He said I needed corrective lenses. She asked him if they make corrective full-body suits.

She was a strict vegan, when she wasn’t eating meat. She was tall and thin. Never had any weight issues. She would stand in front of the mirror and say, “I need to lose some height.”

She got her master’s in Eastern Religious History. I told her, “Go for the doctorate,” but she insisted there was no future in it. One night, she studied the sutras so hard, her head exploded. I saw that happen. There’s no recovering from that.

We grew apart. We decided we should make what we shared purely platonic, except without the friendship part. She could play hard to get on an Olympic level. At one point she even took out a restraining order. She said that she needed some space, but then amended that to include all space.

She lived in a rent-controlled apartment in the Upper West Side. Hard girl to leave. She said New York was like a huge rave, without the music or the dancing. I remember once when we went to Coney Island a midget walked up to us out of nowhere. He told her that he was kind of a big deal. I didn’t care for him; he kept sticking his nose in our business. I should’ve seen it coming. When we rode the ferris wheel, I asked her if she could love me forever. She said she could handle up till the next time she filed. Something about me being independent. Or a dependent. We called it a deal. 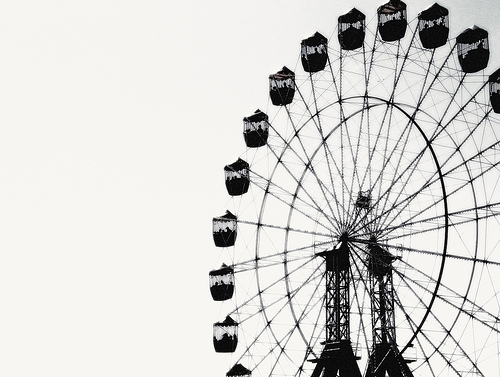 There were things about her I loved. I’m sure there were. There were certainly parts of her that I loved. She had a thing for dogs. One time a complete stranger showed her his toy poodle, and she played with it for awhile. She didn’t have any pets of her own, but she did keep a Brazillian Hairless that I was quite fond of.

Once she said, “I have to tell you something.” I asked her what it was. She said, “Never mind.” I said, “alright.”  Again with the fury.

She was so into fashion. Late one night we were walking home. A flasher opened his coat. She said, “Wait, is that Armani?” She called her favorite heels “Ganesha Boots,” because she said they blocked anyone from fucking with her. She had an amazing collection of shoes. Hundreds of pairs. She kept them stored throughout the city, mostly in shop windows and on other women’s feet. Sometimes, she brought her work home with her. I was never more helpful than when she wanted to partner in Child’s Pose. I admired her so much when she took Happy Baby. We were in love. I think. I mean I definitely loved her. If by “love” you mean “wanted with all my heart for her to stop talking sometimes.”

She used to talk in cutesy baby talk. Not with me, with everybody. The guy at the bagel shop was always amused. She was warm, almost effusive. Her abilities in flirtation and magnetism were stunning. She could wink circles around me.

We were very progressive, as a couple. It finally got to where we could say to each other, with a mere nod, that she was smarter. She has no regrets. She has 20/200 hindsight.

Nowadays, I miss her smile, and the sex. I missed them when we were together, too, but I also miss them now.

I’m sorry, what was your question?