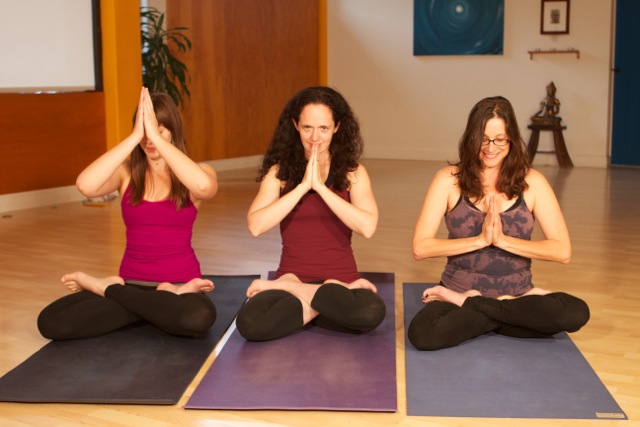 This month, I begin my second decade as an Ashtanga yoga practitioner.

The mathematician in me wants to calculate what this means. How many minutes on the yoga mat, how many Sun Salutations, how many attempts at Laguvadrasana, how many thousands of breaths? In how many different studios, in how many different countries have I practiced, journeying with a succession of battered yoga mats and a constantly evolving set of postures and breath?

The yogi in me gently suggests to the analytical me that the counting means nothing. It’s the fact that the practice has become a part of my life that matters most.

Yoga has become the constant while everything else has changed.

Looking back to my first few months of practice a decade ago, I remember shaking my head with astonishment as I watched my teacher demonstrate a forward folded headstand thinking, “Well, if I can ever do a headstand on my own, I’ll never be able to bend in half like that!”

Toward the end of my first year, in early 2005, an opportunity to take my practice to the next level emerged, as my teacher mentioned, “Guruji (the 90-year old founder of Ashtanga yoga) will be teaching in San Francisco in a few weeks. I’ll bet you can be ready to attend his session.”

“Really?” I answered. “But, I can barely do some of the postures.”

“Everyone struggles with certain postures, that shouldn’t prevent you from going. To get ready, we can add vinyasas between each side of the seated postures, I think you can do that.”

“But what about Marichasana D? I can’t do that without help.”

“Well, like I said, even the most experienced practitioners have good and bad days with poses. It’s not about being perfect, it’s about showing up on the mat.”

“What did this “getting ready” mean, I wondered?

It meant weeks of limp arms and shoulders aching from the new effort of the extra vinyasas. It meant clumsy somersaults and tweaked neck muscles as I moved away from the wall, and attempted headstand for ten long breaths on my own. At the end of these new more intense practice sessions, the sweat would drip off my face and down my chest as I sat in lotus, and my mind was blank and still.  As I took the slow deep breaths, I sometimes imagined the lobes of my brain as empty tubes that were being blown clear of debris with each inhale and exhale.

The burst of energy in preparation for Guruji’s visit took my practice to a new level. I felt honored and humbled to bring my evolving practice to the Regency Ballroom in San Francisco, to stand among scores of other yogis that April morning, with the revered founder of the Ashtanga yoga series calling out the postures in heavily accented English.  It was a memorable scene—scores of tattooed practitioners lined up with geometrical precision on our yoga mats, stretching and folding in unison. Like Breathing Warriors in training for a great mission, I thought, smiling through my sweat. Breathing Warriors. Except our breath was not a weapon but our shield.

In the next few years, progress came slowly, deliberately.

As I became more comfortable with the primary series, I turned into a yoga evangelist, bringing family and friends along to practice with me. When my beloved teacher moved away for a while, I worked with a succession of different Ashtanga teachers. Each brought a unique personality and approach to the exact same series of postures.

Some of their words still echo in my head:

“Bad lady! Why you dancing?” but with a smile, when I hopped and tilted in Utthita Hasta Padangusthasana, struggling to keep my outstretched leg from dropping to the ground.

“Be fierce!  Jump like a tiger!” said another, exhorting me to find the courage to leap out of a deep squat onto the backs of my arms to balance in Bakasana (crow pose).

“Pull … yourself …. together!” joked another, as I wobbled on my sitbones in Urdhva Mukha Pascimottanasana, inching forward to close the gap between my upward stretched face and my calves.

“Practice, practice, all is coming,” they all said with the hint of an Indian accent, channeling the words of their own teacher. More memorable than the things they said with their voices, though, was what the teachers said with their hands. The gentle touch at the top and bottom of my spine while in child’s pose which magically relaxed my back and made me feel inches taller. The firm grasp and tug to pull my two hands together in Kormasana (sleeping turtle pose). The lightning fast movement at the end of my backbend plunge in Kapotasana  (aka King Pigeon pose) that joined my hands to my heels—-so fast that I couldn’t even take the time to think “I can’t do this!” or cry out “wait, no!” The two thumbs lightly drawing lines on my forehead as I stretched out in Savasana, making me feel as contented and cared for as a toddler settling in for an afternoon nap.

Sometimes, for periods of weeks or months, I felt like I was taking one step forward and two steps back. There was a debilitating back injury mid-decade which forced me to take weeks off to heal. During this time off the mat, I worried if I would ever be able to practice again, couldn’t imagine my life without yoga. When I finally felt ready to resume my practice, it was slow, tentative. I explored the standing series for weeks until I was pain free, then found the rest of the poses were still waiting for me.

At some point, I realized that the sweat, struggle, bruises, exhaustion and exhilaration I felt with yoga was also showing me a path that could help me work through the obstacles and opportunities in other parts of my life.

Yoga proved to be an unexpected source of comfort and strength as I worked thorough the often churning currents of my life during the past decade.

The months when a daughter was caught in the grip of a terrible illness, when I would stand at the top of the mat, hands in prayer, and could not utter the “ommmm” sound for fear that everything I was holding together inside me would come spilling out. The years of navigating through the end of a marriage, then finding love again and building a new life were somehow smoothed by the lessons I had learned in yoga.

What will the next decade of Ashtanga practice bring?

At some point, I expect that new postures will stop being added, and some poses may disappear. Perhaps I will go deeper into pranayama and meditation.  A shift has already begun in my life outside of the yoga studio, where my multi-tasking energy and striving for accomplishments has given way to a desire to be in the moment, for strengthening my existing relationships.

Who knows, maybe in this decade I’ll also visit Mysore.

What I do know is that my yoga practice will be a companion on the journey, sometimes leading the way, sometimes walking side by side with me.  And I know that no matter how many postures I am able to do, what yoga really means to me is captured in the words I speak at the end of each session, “May the practice multiply the good in your mind, your words and your heart. Namaste.”