Checklist for Surviving the End of Civilization. ~ Tifany Lee NASA recently proved mathematically that civilization has an expiration date and it happens within the next couple of decades or so.

We had a good run—we pushed all the way to the limit of the 5,000 year civilization cycle, so that’s pretty good, right? But now the problems that are inherent to a retiring civilization—overpopulation, rampant economic inequality, strained resources due to overpopulation and said inequality—are working their magic as we speak.

This would explain a lot.

This would explain the insanity of the Nazis. Get me straight: I am not in any way condoning their behavior and heinous actions. The Nazis would have been better ideologically protected if they had culled the herd by a random draw than the idiot plan they devised in the end—but it was a solution to the problem of overpopulation. Planned Parenthood tried to solve the problem too, but doesn’t seem to be making much headway over the last forty years.

This would explain the rapid extinction of species across the globe—are there really only 300 lions left in the wild? Civilization literally stretches into every nook and cranny, chasing out everything else. I hope that the lions don’t take the route of the dinosaurs, and that the humans of the future, the humans of the next civilization, have more epic animals to contemplate than our own surly house cat.

This explains the younger generation preparing for a life in the wild. A young man of 14 recently performed his own rite of passage: he built and lived in an igloo in his backyard for the weekend, just to see if he could do it. And, guess what? He did.

It turns out that we don’t need civilization to survive.

So, everyone was wrong: the earth will survive and swallow us up. Moss will consume the manmade environment and the humans will no longer be in charge.

The humans of the future will contemplate our moss-covered skyscrapers with wonder and project the wrongs of their own society onto our history. They will imagine that we didn’t have electricity—because they will have invented it, of course—and slaves climbed to perilous heights to try and touch the sky. Well, they will have gotten the slaves part right… Blue collar workers might as well be slaves in today’s economy.

While the end of civilization may be bad for the creature comforts that we have come to know and love, I am positive and hopeful for a more balanced environment. I am just as much a culprit of creature comforts as everyone else, but I have noticed a disturbing trend that the more civilized we become, the less civil we are to each other. I am hoping that we will be nicer. I am, of course, hoping that everyone else survives, so, with that in mind, let’s begin the preparations for our move back to the woods.

1. Stockpile ammo (or arrows, or get your hands on your sledgehammer of choice).

Chances are that the zombies that we have been enjoying on television are the subconscious representation of those unprepared for any type of upheaval. Those people with more resources now will most likely be the least capable of handling a hardier way of life. Plus, if you want to eat meat (your choice, of course) then you will need some way to acquire it.

Start now. My honey and I have found that there is quite a steep learning curve to this activity. We may figure out how to grow tomatoes in the next 20 years.

3. Reduce your dependence on power until you no longer need it.

Rely on fires and human contact for warmth. Shower in the stream down the street.

4. Learn how to skin an animal.

I, myself, am not going out into the elements as a vegetarian, that’s for sure. This lifestyle was devised as a last ditch effort to share resources for too many people, but I am guessing that it is unsustainable for a hardier lifestyle (and hardcore yoga in a climate controlled environment is not what I would consider hardy). Plus, the animals will reproduce quickly when all of the humans die off and controlling the animal population will become necessary once again.

5. Surround yourself with a serious team.

Have you ever heard the phrase, It’s who you know? I figure that this statement remains pertinent even after we ditch civilization. But I won’t choose the CEO of the nearby corporation who knows how to balance his company’s bank account; I want the conspiracy theorist neighbor on my team who has been practicing for this moment for his entire life.

6. Find a water source and prepare to protect it.

If you are already showering in the stream down the street, this will keep most out until the situation grows more dire. Then, refer back to item #1.

7. Learn how to entertain yourself and others.

Before there was television or radio or movies or internet, people sat around and entertained themselves. They read stories aloud to the family after dinner, they learned instruments and played music with each other. They told stories about their neighbor, acting them out.

As a musician and artist, I know the joy that is inherent in the creation and collaboration of a new song. This act does not compare in the slightest to listening to a song on the radio. Stop paying other people to make your music and make it yourself.

9. Get good at doing nothing.

No cars, no internet. We are going to get good at watching that sunset we only now briefly admire when we’re cutting people off in rush hour traffic.

Death happens. To people too. I know that this concept is difficult, but facing death as it happens to others prepares us for our own eventual end. Embrace the magic about it. Our terror of death has us visiting witless doctors who can do nothing for us but hop us up on drugs that quell our fear of death.

Just get over it. Set your own broken bones. And appreciate an animal or plant in your environment as equally beneficial to your wellbeing.

I myself am choosing to die struggling against the jaws of a big lion (or bear) right before he eats me and shits me out. Then I will grow into a tree. I will stretch up into the sky and laugh at my victory.

Not everyone will survive, but with some preparation we have a greater chance preparing for the complete shift in living that is mathematically destined to arrive. We have seen it coming for a long time, and I myself look forward to a life more in balance with the elements, relationships more integral to survival, and the singular awe inspired by natural beauty instead of the trivial surprise of trendy bullshit.

Keep your head up: it’s not like it’s the end of the world… 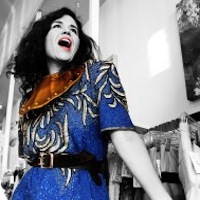 Tifany Lee is a singer, musician, theatrician, activist and yogini. Her playZombie U was recently published in the APW Press Anthology, and her third album, Southern Gothic… Read full bio