Dealing with my Deeply Encoded Fear of Flying. ~ Carrie Bloomston I got a call about two months ago from an editor at Interweave.

She said they’d like to produce a DVD of me teaching design basics.

Said they’d also film three segments for Quilting Arts TV on PBS on the same day. She said it would be filmed the week of March 24th…in a production studio…in Ohio. Solon, Ohio…just outside of Cleveland.

Contracts ensued. Papers to be signed. Outlines to be written. I walked through the hoops, sort of.

I mean, I dragged my feet as slowly as I possibly could. I read the contracts with mild interest. Because in the back of my mind, I wasn’t going. I knew it was all an exercise in futility—the game I had played with myself many times in the previous decade and a half—the fear-of-flying-game.

It’s the I’m-hiding-under-my-bed game. The too-scared-to-go-so-I-will-start-justifying-why-this-is-a-bad-idea-anyway game. Who wants to watch me make stuff on TV? Who would pay money to buy a DVD of me speaking?

My fear of flying is also a deeply encoded habit—the fear habit.

We sometimes default into our fear because it is sitting right there; an open invitation from our smallest self.

I avoided every step of the process for as long as humanly possible, until I had to finally explain my snail’s pace to the editor. I explained that I had an old fear of flying. I told her (and more importantly I told myself) that I’d be there. I knew I would go.

Everyone who knows me knows about my fear of flying. I have flown. All of my life I have flown…many places in the world. Europe. Asia. But never with much grace. As a child, I had to take Dramamine because I’d puke. Who pukes on a plane? I did.

It was pure, raw fear that was moving through my body. Trembling fear. Fear caused by two letters: K.K. My grandmother, K.K., Kay Greenberg. (beautiful K.K. on the right, her mom (my great grandmother) on the left)

She was my mom’s mom. She was gorgeous and so alive…so creative. She had psoriasis. I used to name the freckles on her legs. She had so many. She was sort of a red head, but I don’t think it was real. She lied about her age. She was bigger than life—an artist, painter, actress, model. I adored her. She smoked weed with my Dad. She was untamable…discontented with the ordinary suburban life. She was wild. And, she was escaping.

When I was three, my Dad and I went to the airport to pick her up. She had recently divorced my grandfather. She was on her way to visit us in Alabama in a two-seater plane with her pilot boyfriend. They were coming from Kansas City, but they swooped down to Miami for a day to play.

We waited at the Birmingham Airport for a really long time. Then we went home. There was more waiting. And then, there was a call. My 24 year old mom lost her mom that day.

Their plane…they were skimming the beaches…they couldn’t get up high enough to clear the tall pine trees.

Here grows the root of my fear––my longtime companion, how trauma plays out.

I am 41. An editor called. I had to fly to Ohio. Period. I had to face it alone. People offered to fly with me. But I knew I needed to do it alone because I would act out and be dramatic if I had an audience.

In my twenties, I noticed that the weeks leading up to a flight were anxious for me. The anxiety disseminated into all areas of my life. So I stopped flying. After doing so much work in my 30s to rid myself of the illusion of control, this is where I still held on. I let myself white-knuckle this…almost out of habit. The fear habit. I, a person who loves therapy, am married to a soon-to-be-therapist, never managed to confront this particular issue. Hmmm. Curious.

For the first time in my 38 year journey with this fear, I faced it straight on. I went towards it. Two weeks before I was to leave, my amazing yoga teacher, Anton Mackey, was talking to us about letting go of what we don’t need—what no longer serves us—and letting it be burned up in the fire of our tapas (austerity).

You know how sometimes your yoga teacher is speaking and all of the sudden it becomes painfully clear that they are shining a laser of awareness into your soul?

That what they are speaking about is exactly what you need in that exact moment?

So I worked on it on my yoga mat—yielding surprising and convulsive sobs in savasana as I realized that I just wanted to wave goodbye to K.K., the three year old me in the Birmingham airport…looking out of the big plate glass windows…waving. I just wanted her to wave back once more. I had to let her go. And I had to let go of the habit of being afraid to fly.

I asked my friends for help. Each of them gave me a trinket, a tool, a technique to help me. Talismans, one and all. I love magical thinking and real or imaginary forcefields.

So, I gathered up fistfuls of Silver & Sage Malas and bracelets—I gathered my courage and my playlists and I got myself through baggage check-in and security and I even bought myself a sandwich. I sat in my seat and I breathed. I Jin Shin Jyutsu-ed the crap out of my pointer finger as my friend, Dusti, told me to do.

I could feel the love of friends and family hugging around me. They texted and called. Their love helped me. That is what god is, isn’t it? God is love. I surrendered to  the love around me and I cried at take off. But that was just a few minutes and then I got to see huge farms and mountains and for the first time I saw the Great Lakes and they are big. So big—like little seas.

And, I was filmed. It was fun. My main point was to help people to celebrate their inner artist. I am a creativity enabler, after all. 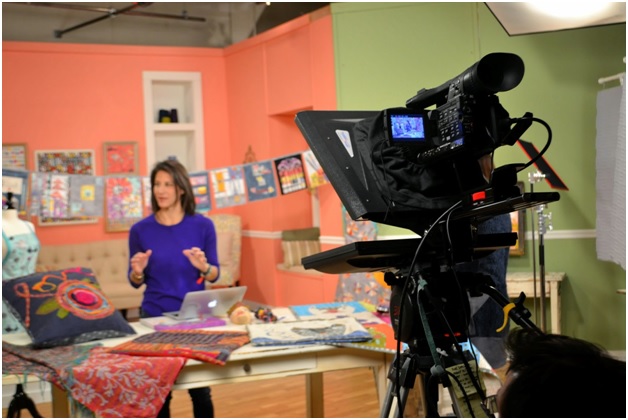 No matter what I am teaching, my message is always the same: trust yourself, know you can, you are good enough, there is no perfect.

And, guess what? I listened to my own wisdom and pulled up my big girl pants and I got on a plane and I did it.