Happily is Enough: Let’s Leave Ever After to the Fairy Tales. ~ Tamara Harasen 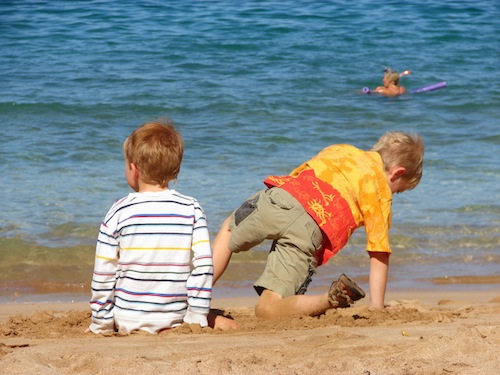 Just because something doesn’t last forever doesn’t mean it wasn’t meant to be, or even that it was never yours.

It just wasn’t meant to be yours forever.

I said this to my son the other night after we finished watching the final episode of How I Met Your Mother. And the funny thing is, I’m pretty sure it wasn’t something I even knew to be true until I said it.

How I Met Your Mother is a show that my younger son and I have shared since we both came to it belatedly about three years ago. If you’re not familiar with the show, it basically ended like this:

Ted spent nine seasons looking for “the one.” He finally found her, but the universe only loaned her to him for about ten years before she became ill and died. Which, after an appropriate period of mourning, living and raising his children had elapsed, allowed him to see that his old friend Robyn was perhaps the other “one.”

And life went on.

With any luck, my children are learning things it took me four decades to only begin to understand. The cost of my journey has been dear, but I am beginning to believe that teaching my children these things will make it worth it.  And for this, I am beginning to feel grateful, because I often fear that my mistakes and shortcomings will scar my children just as they have scarred me.

It is difficult to give things up: loves, careers, homes, dreams, security, forevers.

Our world often lulls us into believing that we can have some things forever: your one true love, your health, an intact relationship with members of your family. And maybe some forevers are real. Like a mother’s love for her children, or one’s love of books or the first taste of ice cream each spring.

I grew up believing in fairy tales, forever and happy endings. And I can’t really blame anyone for brainwashing me into it. It’s just what I wanted (or needed) to believe in.

But the seemingly innocuous dream of happily-ever-after is a dangerous illusion for the dreamer that puts her heart and soul into everything she does. Because sometimes a person focuses so much on the destination that she forgets to enjoy the journey. And if that destination dematerializes in a puff of smoke, it can take a long time to rebuild the rainbow and a new pot of gold worthy of chasing.

My children are not only my greatest joy and accomplishment; they are also two of my greatest teachers. Somehow my choices and the universe’s sense of humour have managed to teach them, and me through them, a number of valuable lessons.

When you give something a funny name, it takes away its power. Just don’t tell the principal that we have dubbed the official school sanctioned portion of the Grade 8 graduation ceremonies StalinGrad, because I will deny it.

A genuine apology can sometimes take all the pain away.

A job that makes their mom bitchy and irritable and always too busy for anything is not a job worth having.

Hugs can cure almost anything.

If I’m yelling at them to pick up all of their crap for the 2000th consecutive day, and I add, “And pick up that blood,” they know that I’m not actually angry; I’m just doing my mom thing.

All they need to do to get Dairy Queen on any given day is to ask their mom if she wants to go to Dairy Queen. (I don’t think I’ve ever said no. Why would I?)

They understand, perhaps better than I do, that marriages sometimes end even if you don’t want them to.

They know that mom will always be there for them, even if they’re forty and suddenly need her to drop everything and come to live with them for a month.

They understand that what they are taught in school is probably important and probably right, but they have a role to play in deciding whether what they are being taught has any relevance to their lives, and what to do with that.

They know that they are the most important thing in their parents’ lives, but that both of their parents still have lives outside of them.

I am still struggling with this whole enjoy-the-moment thing. But I am getting better at it. And it seems that the better I get, the smarter my children become.

So, I’ve got that going for me, which is nice.