When We Keep Falling for the Crazy Ones. ~ Greg Turiya Liotta 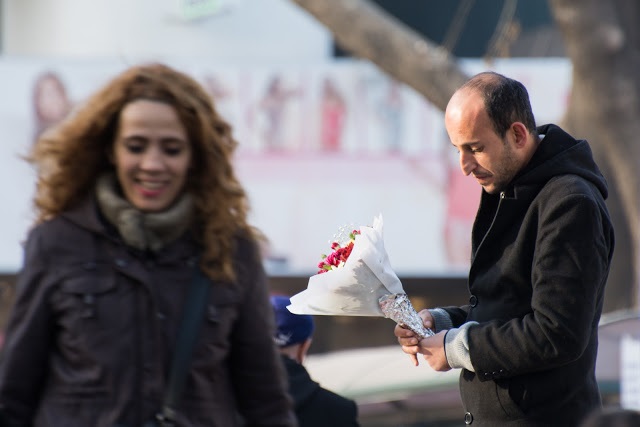 “I’m dating a guy who is very nice, handsome and gentle, but—again—I’m just not into him.”

She’s a brilliant, beautiful yogini who sings like an angel and has a mane of glorious red hair that rolls down her shoulders like wild horses galloping across a field during the ‘Magic Hour.’

She tells me: “I met an astrologer and it was great fun to talk to him but not suitable for a relationship. He’s way too crazy and not interested in relationships. But he’s great fun. I’m always falling for the crazy guys. I’ll just have to keep trying.”

Funny how “fun” so rarely translates into “joy.”

She told me, “I just don’t know how to stop falling for the crazies.”

Then I hit her with the ax that breaks the chains—it begins with the acknowledgement that I attract what I am.

So if I am always falling for the crazies, then, um, that only means one thing— Hello mirror.

Here’s the bitter pill— The universe is an echo.

Nobody is “crazy” without my own “crazy.”

Let’s define “crazy”, then, shall we?

A newborn baby kicks its feet and wails for the bottle, for attention, for love. It wails in the middle of the night when we’re trying to sleep. Maybe we complain about having to get up when we’re exhausted, but we go feed that child.

Because that’s the deal.

That’s how we keep a baby alive long enough to feed itself (and maybe even us) one day.

We don’t call that “crazy.”

But when a child has been wounded (or ignored) badly enough, often times he/she becomes an adult whose very life becomes a wail.

We all know that person whose love life seems to be a howl.

You know the one who always seems to be kicking up a storm, crying for “more,” crying to be taken care of, yet unable to nurture.

They usually start off as irresistible in the way that babies are adorable.

Until that baby turns into Chucky.

We all carry a little “Chucky” inside of us, no?

Some of us learn to soothe him, keep him in his place.

Some of us look for him in the eyes of other people, and try dealing with him through them.

That’s when the horror show commences.

Legend has it there was once a beast named Grendel was chewing up all the people in a club.

For hundreds of years Grendel terrorized the hall, and nobody could defeat it.

He was referred to as “shadow walker” or “night goer.”

Grendel feasted on the revelers for a long time, until a warrior (Beowulf) came along who carried within himself both courage and wisdom. This is a union which changes the mode of warriorship. In an epic battle, Beowulf killed Grendel, but the real fight was just getting started.

You see, Grendel had a mother. And she was pissed.

In the movie “The13th Warrior,” Grendel’s mother is portrayed by Angelina Jolie, which is a good piece of type casting, because the origin of every problem is both ancient and young, beautiful and ugly, seductive and repelling.

Not an easy foe.

But if we want to settle a problem, we’ve got to go in there and pull it up by its roots.

We have to be willing to dive into the belly of the beast.

We have to go down and shake hands with our own crazy self.

So long as we think we’re an unfortunate “victim” of this tendency, the sad dance continues.

The victim feels—“this is happening to me.”

The warrior feels—“I am calling this to me.”

That part of ourselves—the “crazy”—is a very powerful magnet.

It is a siren heard throughout the land, and there’s nothing we can do to muffle that.

But we can do this— compassion, acceptance, and love.

They are like hot sun to a piece of chocolate—leave it out long enough and it melts.

But most of us get bonded to our own crazy, and try to jar it up like preserves.

Make sure it doesn’t get out.

Be sure it doesn’t make any noise.

And when it begins to scream for air, we can blame the crazy girlfriend.

I know this dance.

If they had a “Dancing with the Stars” for men who lose themselves in romances with emotional unstable people,

I once wore the crown.

For many years I was a living magnet for emotionally unavailable people.

The vulnerability of a wounded bird is enough to turn all my lights on.

And then there is the drama.

And then there is the sex.

For people like me, normal, balanced partners equaled bland.

I discovered we can become addicted to drama.

At first, my insight was minimal. It was, “I keep getting into relationships with the crazy ones.”

Then, after a few years, I graduated to acknowledging “I’m a magnet for crazy women.”

I stayed at that level of pseudo-insight a few more years.

Next stop on that elevator was “I must be carrying a crazy person inside of me.”

I worked on that for a while. That’s a juicy piece of work for an experiential therapist.

But still, I couldn’t get it out.

I went through a phase some people might be familiar with—the one where we give up and say, “I’m screwed. It’s just my karma. I’m a lost cause. Can’t change.”

But the truth is, for most of us, fending off a scary beast like Grendel every few years is easier than actually going down into its lair. I mean, confronting Grendel’s mother, a person can get hurt doing a crazy thing like that.

So we begin to weigh the toll of battle scars. Eventually, if we’re lucky, the pain of dealing with Grendel every few years overcomes us, and we decide, fuck it. I’m gonna do this.

We go deep, well beneath the surface of those waters.

We confront the “mother” of our attachment to “crazy.”

Once we get there, choose our sword wisely.

Because we can’t beat that one the usual way.

This one requires the double edged sword of love and compassion.

To finally be able to say, “It’s okay that this is here but I don’t have to let it rule me.”

Fail to do that, and we will either live in isolation our whole life, or walk around with a Vampire stuck to our neck.

It took me a long time, but eventually I was able to recognize a Vampire when I saw one.

The Vampire is seductive, a shape shifter. Shows us what we want to see.

Gets close enough to sink its teeth in and suck our life out.

And it hurts, but it feels good.

We become intoxicated by that.

And we want more.

The only way to deal with that is to pierce its heart with a blade and chop its head off.

Pierce the heart. Not to “kill” it, but to free it. Because as everyone knows, a Vampire can’t be killed.

A Vampire isn’t dead nor is it alive.

It’s “undead,” living in a perpetual state of emptiness, avoiding the light, forever lurking in the shadows to avoid exposure.

The mirror shows nothing.

This person longs for intimate connection but, unable to stop hiding, it’s incapable of a heart-to-heart connection.

It’s driven by love, but unable to give.

It only knows to take.

It cannot die, because to love is to die to oneself.

Really, the only way to deal with a Vampire is to give it freedom at the edge of a sharp sword.

A sword that asks the question, “How am I the Vampire?”

Strike with uncompromising ferocity. Ask ourselves, “How do I hide from Love?”

Become vulnerable enough to admit— “I choose this because I am afraid.”

Until the heart is pierced, it has no peace.

I told my beautiful friend, we have to go deep down into the depths of who we are.

Be prepared to do battle.

Be prepared to face ourselves.

Not a brighter guy.

Not a better woman.

Come to terms with the “mother” of all our own crazy.

Expose ourselves to the light.

We attract another kind of lover.

Our life begins to sound like a sweeter song, and that melody brings new dancers.