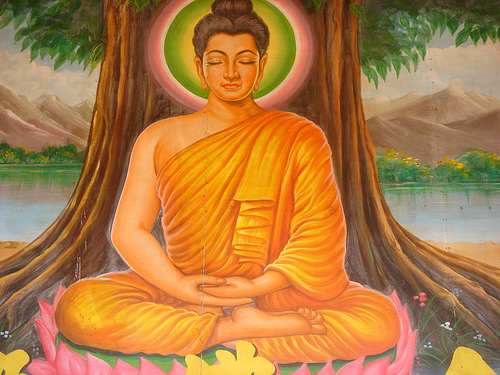 Siddhartha Gautama, the man who would become the Buddha, went to sit under a tree.

He had been a spiritual seeker for years and every path he had chosen had come to nothing. He was deeply unsatisfied with the mainstream religion of his time, which was anti-science and hostile to women and minorities. So, he had traveled for years looking for spiritual truth.

And he hadn’t found it. Many of us would have given up.

But, he sat under a tree. He had realized a small insight that had inspired him to look within himself for the truth. He had caught a glimpse of what we call our Buddha Nature.

So, he sat under this tree and meditated.

He didn’t invent meditation. It had existed for a very long time. People may not realize that Buddhism is part of a continuum, it builds on the religious teachings that preceded it.

He was a die-hard meditation enthusiast. He vowed to sit under that tree until he had a breakthrough, some fundamental insight into human suffering.

And the truth came to him. At this point, he became the Buddha, which means ‘awakened one.’

He looked up at the sky and saw a star twinkling and he said, “Look, I am twinkling.”

He realized fundamental truths on both a mundane level and on a deeper level.

He discovered that the source of our suffering is our craving, our endless state of wanting more and he described a path to overcome that suffering. This is the path that we still follow today. It teaches us that harming ourselves or others is counterproductive. It teaches us to think before we act, but also that thinking too much is often a problem too. Who among us hasn’t suffered due to excessive worrying.

He taught us to live in the present moment, rather than spending too much time in the past or future. This doesn’t mean we should forget the past. There’s a difference between learning from our mistakes and replaying them in our minds over and over.

And the Buddha taught us that all things are interconnected. We tend to think that we are separate from each other and from the world around us. This delusion is a great source of suffering in our lives. We are deeply connected to everything around us in countless ways. That’s why negativity and destructiveness are harmful. When we put violence into the world, we are harming ourselves too.

And the Buddha thought to himself, “This insight I have is experiential. I don’t think I can teach this to anyone. They would have to see for themselves.”

He considered staying, living out his life, alone in the wilderness. He was right, of course. Having an intellectual understanding of the Buddha’s teaching isn’t the same as enlightenment. We have to have a deeper understanding, an intuitive understanding rather than a philosophical one.

The Buddha was moved by a great sense of compassion. He thought teaching wouldn’t work, but not trying seemed unacceptable. So, he came out of the forest to teach us all how to save ourselves from suffering.

Daniel Scharpenburg lives in Kansas City. He’s been practicing Buddhism for nearly 20 years. He teaches at the Open Heart Project Sangha and is a Zen Teacher (Fashi) in … Read full bio