For Frustrated Parents: Get Your Kids Moving. 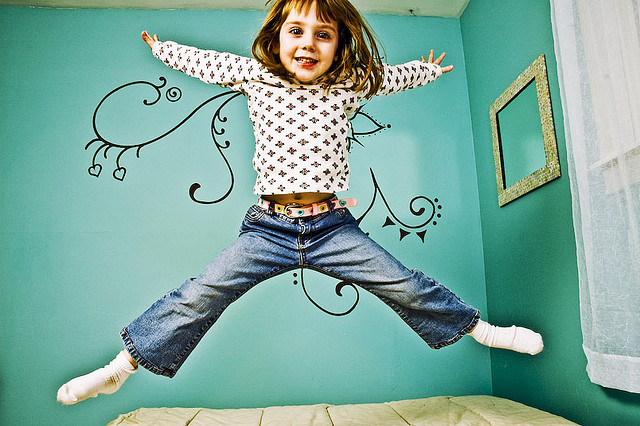 Granted, it looks a little strange.

Aside from socks and shoes, which are easy to execute later, we have achieved the victorious completion of getting dressed!

But it hasn’t always been this easy.

You see, on mornings when we have someplace to be at a certain time, Opal wakes up with her emergency break on. I am gallant in my efforts not to rush her, but we do need to keep things moving forward. Somehow. Even a twinge of forward-movement is often enough to spur a meltdown. Just suggesting she have a bite of breakfast will result in, “Don’t rush me!” or worse, utter paralaysis. Getting dressed on school mornings was a task that, from beginning to end, came at my nerves like a rusty cheese grater.

I would say, “Okay, honey, I picked out two outfits to choose from. Which one would you like?” And she would either stare off into space or wander over to her fish rainbow, or want to go tell daddy something or want to lie down because she is so tired.

I sifted back through the blog archives from a year ago, recalling having a conversation with a play therapist about this very thing.

The play therapist said this: “Little minds handle transitions much differently than adults do.

Their minds are simply not developed enough to adapt as quickly as we do.  It’s incredibly important to remember this, before anything else. For many children, transitions need to be done with great care and empathy.

Your job will be to keep yourself grounded and then to ground her by getting her into her body.  Slow down and maintain eye contact. Let her use her mind, if possible, by bringing in a question or a problem to solve, like which of these tasks should we do first or should we skip or crawl down the hall to brush teeth? Keep it playful and as positive as possible.”

I also hunkered down with the book, Whole Brain Child for some insights on how to refrain from losing my mind with a girl who was often fighting off (even the gentlest of) forward motion by screaming or being lost in space.

Ah, yes. Get the body involved. This phrase appears again and again in the chorus of parenthood.

So I tried jumping jacks, for starters. Plus a few random obstacle-course-type missions inserted into our morning routines. Not only did it work to keep her engaged and get her dressed, but, on that first day, we both maintained residence in the land of Playful Parenting, not once veering into the dark trenches of Infuriation! Glorious Day!

Even Jesse said, “Sounded like you were having fun in there!” The morning ritual of getting dressed had often, historically, resulted in my rolling my eyes at him in the hall. But that day, we emerged from Opal’s room in a state of cheerful rambunctiousness.

Getting the body involved has helped Opal in other areas where focus was difficult to maintain.

The next day, having given her a warning, I announced to Opal that it was bath time. She was in the middle of her Little Pony game, pieces strewn all over the place. Typically, this news would have resulted in a meltdown, or stalling the clean-up process until the bath water was cold.

“But we need to pick all this up first!” I said. “Quick, one jumping jack and grab the ponies!”

“Great job! Now, another jumping jack and put the board away!”

A state of excitement, thrill and silliness was maintained! She was so focused on executing the jumping jacks that putting away the game was just something she did in-between.

My mom, who was visiting from out of town and sitting on the living room couch, flashed me a curious look.

A quick smile and a nod from me was all she needed to understand. She is, after all, a mother too.