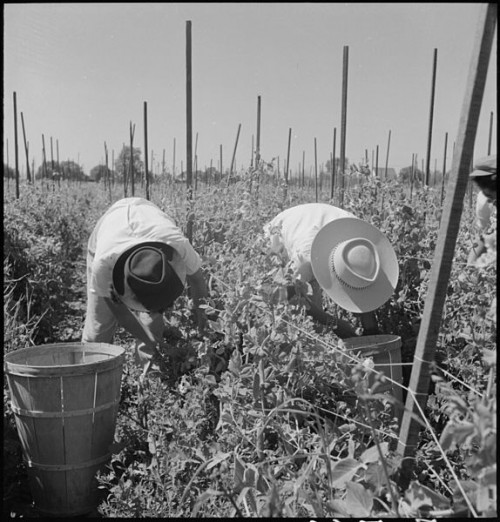 Bracero; from the Spanish brazo, arm. It refers to those who work with their arms.

The Bracero Program was a government strategy to import Mexican labor to the USA farms in order to keep up with the food demand during World War II. The bracero program has impacted most of the lives of Mexican immigrants in USA. Near 70% of all immigrants from Mexico can trace their roots to a parent or grandparent from the Bracero program. It is not necessary to had been a member of the Program to have had an impact because of it.

And there is where the story of many immigrants enter.

When World War II began, an extreme necessity for food to serve the people was needed. However, there were no people to work the fields because they were all either fighting the war, or working in the weapons factories. As the demand for food started increasing, USA farmers sought the way to have their lands worked.

After negotiations between Mexican and USA government, in 1942 they started “importing” people willing to work on the fields for little pay.

At the same time, in Mexico, there was no economic stabilization. At that time, Mexico was going through a severe drought. The lands were not apt to produce crops. The amount of rural population was overwhelmingly more in comparison to the arable acreage.

Because of those reasons, Mexican nationals started fleeing their homeland to take jobs in the USA farms.

They started arriving to California. In order to be contracted, they had to pass a physical inspection. The inspection performed by Mexican and USA officials, included a revision on the hands (the more calloused they had them, the better chance they got to be hired) and a session of DDT sprayed on their bodies. Nonetheless, the demand of Mexican workers across the country increased. They found in foreign hands, the talent that they could not find within the national frontier. Therefore, the program spread across the country.

The idealization in Mexico of the work in America was seen as something good.

As their pays started arriving, they sent them out to their families in Mexico. On one hand, more people wanted to come so they could provide for their families. On the other hand, the farm owners needed more and more people with the least money loss for them.

Because of that, illegal farm workers started joining the lines of newcomers. The availability of illegal farm labor meant less pay with the worst working conditions.

The Program lasted 22 years. On December 31st 1964 the Program was dissolved. During that time, it has been reported that 4.5 million Mexicans joined the farm labor in USA. However, those numbers are not completely accurate because of the losses that were suffered within that period of time, unreported illegal or legal immigrants and incomplete records.

That seems such a long gone story.

However, it is because of the work of one of those men that I am now here.

My maternal grandfather was one of the men available willing to take less pay for more working hours in order to get a place to pick up fruit or whatever the season offered at the time. Willing to go through the inspections and stay for the whole season.

He used to return to Mexico only twice a year to see his family and bring them presents. My mom still recalls her brand new blue and yellow shoes. Even when I used to go to my grandparents’ house at the pueblo, I used to see my mom’s life-size walking doll in the corner of one of the rooms, the one that my grandpa gave her on one of his visits back to Mexico.

A few years later, he managed to become US citizen. The days of running away from the police were over.

The incarcerations waiting for deportation, where he saw friends being drenched on some kind of disinfectant and then dying, were over. Afterwards, he dedicated his time in US farms overseeing and helping his paisanos, his fellow Mexican workers at their arrival to California.

Later on, he was able to make a petition for US residency for his family. They came and my grandma started working as well. Before my mom could start school, she had to stay home to take care of her younger sister. Her brothers on the other hand, had to go to the field and work.

After a few more years living in California and after the Bracero Program ended, the food business in their town in Mexico started taking a good turn and began to prosper. The family of my grandpa was calling them to return. The years apart felt heavy and the family bonds were strong to make them go back. Some of them were happy, some were not.

Even though they returned, the idea of the life in the north stayed with them. Deep enough, to make them come back years later.

I am now here with my mom, after she had a life and a family of her own in Mexico. I had to gather the same strength that my grandpa did once when he left everything to come to the California Bracero rush. It is because of the bit of history that the lives of so many people like us have changed.

We are not just numbers of a long lost legislation.

Gabbi Magana thrives on being alive. Her great companions are her family and her 16 year old dog. She enjoys to express her experiences through the art of writing and paintin… Read full bio