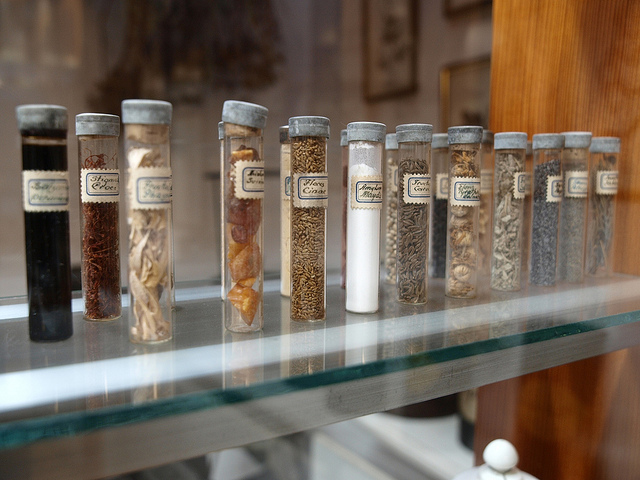 There have been many advances in medicine since the days where we gave babies high-grade narcotics to “soothe” them, electrocuted an impotent penis, or treated a scraped knee by rubbing mercury on it.

Despite the innovations of technology in the medical establishment, there are still many who seek a holistic approach to healing. So why would a person turn to natural remedies when they could just as easily take a pill?

For me, yoga was my gateway drug into the world of holistic healing.

I started practicing at 19, and then went on an exclusive all-earth all-dirt diet soon after—but it only lasted a few days. I stopped taking Advil and over-the-counter medicines, and would instead drink ginger tea and snort* cayenne pepper to cure ailments. (*I was wrong about that idea.) If something were wrong with me, I would always opt for the natural method rather than taking the white man’s medicine.

The last “Western” medication I ever took was birth control pills. Yet at 25 I decided I didn’t want to influx my body with hormones any longer, even though it was convenient.

After I stopped taking the pill, I didn’t get my period for two years.

I finally went to the doctor, got an MRI, and found out I had a “brain tumor” in my pituitary gland. The tumor, although benign, was problematic to my health. It was threatening to cause blindness because of its proximity to my optic nerve, had the potential to become malignant, and was also inhibiting my ability to get pregnant.

At 27 years old I was told I would never have children.

The tumor was attached to my hypothalamus, so surgery was not an option. The suggested protocol was intensive hormone therapy.

Now I would never blame the pill exclusively for the tumor, but considering birth control directly impacts your pituitary, hormone therapy did not seem like an appealing or even logical solution. Yet, despite the advice I got from many, I decided that I was going to heal holistically.

During this journey I experimented with a variety of strategies and met with a whole host of alternative healers.

I drank ayahuasca with a shaman, worked with a reiki practitioner who adorned me with crystals, saw a sound therapist, got my chakras adjusted, was counseled by a raw food expert… Some of these healers were helpful; as for others, I maybe paid $100 an hour for them to watch me nap as they performed a subtle-body realignment.

I just kept trying, and seeing what felt right.

The only thing I knew for sure was that I was committed to the idea that there was the potential to heal myself through the guidance of these alternative practices.

At one point during this time I got a yeast infection. I know—yum. Although my instinct was to run to the store for some Monistat, that felt hypocritical.

How could I expect to heal my brain with positive intentions and natural remedies but go to CVS for an itchy vagina?

If I was going to believe in natural healing, I had to truly have faith in all aspects.

It may have been a longer process to endure while I drank apple cider vinegar, stopped eating sugar, and ingested a disturbing amount of garlic in a variety of orifices—but it worked, and that gave me hope. My new and improved sacred lotus inspired me, and reminded me that I could in fact cure my head as well.

One of the holistic healers that I was working with said to me “Toni, you created this tumor, you can take it away.” Even though it was a daunting idea, it was also empowering.

I was responsible for my own health. It is not as if a giant opened up my skull and strategically placed a tumor in my head.

My body formed the tumor even though my conscious self didn’t think that was the best idea.

So my body and mind had to work together to make it go away.

I will admit that the path I pursued took a lot of work, commitment, conviction, and maybe even a dash of crazy.

Honestly, though, I don’t know what happened with my tumor. I stopped getting MRI’s because while I was getting them things kept getting worse. I began to feel that monitoring my tumor was reinforcing its existence. I was always in a mental state of fear and anxiety. Because I was lucky enough to have time to experiment, I felt safe that I could take a break from the worry the hospital setting was provoking.

Despite what I was told, at 29 I actually did get pregnant.

I was considered a high-risk pregnancy with a variety of severe complications looming in the world of potentials. This thought initially inspired fear, but then I figured that I wouldn’t have gotten pregnant if the tumor hadn’t at least improved.

Yet, rather than having the home birth I had dreamed of, I felt it was the responsible thing for me to choose to be in the hospital setting—just in case.

I kept a positive frame of mind, ended up having a drama-free natural birth, and am now the mother of a 3-year old.

There are plenty of times when “Western” medicine is the right choice, like, say, if there were an ax stuck in your head. For broken bones, acute wounds, surgeries, and anything that needs immediate attention, we are extremely lucky to have access to the care that we do.

Science and medicine does remarkable things that are worthy of praise. There is also great value, however, in investigating alternative methods.  We don’t have to have a dogmatic approach, insisting that there is only one way towards healing, and oftentimes combining ancient and modern wisdom has a powerful impact.