In the sweetness of friendship let there be laughter, and sharing of pleasures. For in the dew of little things the heart finds its morning and is refreshed.

From the Riverbed of Hearts it isn’t far to Heart Hill.

I’ve lingered here, and made the trek a few times now, though any way you look at it, I’m just not a Heartian.

The Heartians are green and soft, and rain droplets perch for long, pregnant moments on them before making their pudgy descent to the ground, which is itself soft and green.

I repeat, sadly, reluctantly: I’m not a Heartian (not yet!).

But I’m delighted to have come into contact with the Land of Hearts – I gave it its name while ambling around a stunning retreat compound I’d only just arrived at a few days earlier.

It had just rained and I’d been sitting with my increasingly uncomfortable self since before dawn. I was instructed to walk extra slow and with mindfulness, to be aware of the foot as it rose, moved forward, and fell. First the right foot, and then the left foot, over and over like this.

I was trying to fix my gaze on the ground a little bit ahead of me so as to keep my balance, to follow the minutia of my movements with the attention of an enlightened being.

I failed; I was distracted by everything from the exotic leaves nearby that reminded me of art nouveau paintings, to the itchiness of my skin, dampened by the humidity and swollen with mosquito love.

Also, just hours earlier, I had what felt like an epiphany, but the bad kind, about how I really didn’t know why I was here – not only here on the retreat, but here here – and in fact, I didn’t really know the reason for anything I’d ever done my whole life.

Now, I not only had to live with this morbid feeling that was planting poison in my stomach, but I had to do this so-called mindfully, as I noticed my breath rise and fall and tended to my legs as they went through the agonizingly slow motions of meditative walking.

How do I choose the lucky recipient of my attention? My thoughts were spinning. Will it be my shallow breath, my rough, travel-worn heels, this incipient feeling of doom? How can I be mindful of everything at once?

In the midst of all this, something made me look over to my right. What I saw took my breath away.

Jutting out from a tree branch rooted in a thick, ragged stump was a big green heart, almost dancing in the air, a quiet greeting to a land far beyond my own.

I looked around to see if anyone else was bearing witness. I couldn’t see anyone. It was like the whole retreat disappeared the very instant I laid eyes on what I immediately started calling The Land of Hearts. Like this encounter was destiny.

A pathway unfolded. I’d never seen anything so inviting, so naturally, I took it.

I felt like I was walking on Earth’s last, richest and most precious of moments, because as Robert Frost knew, nothing gold can stay; such was the dewy feast below my feet, leaves of all kinds strewn upon the sandy ground.

At the end of the aisle I found the tiny, flowing Riverbed of Hearts. 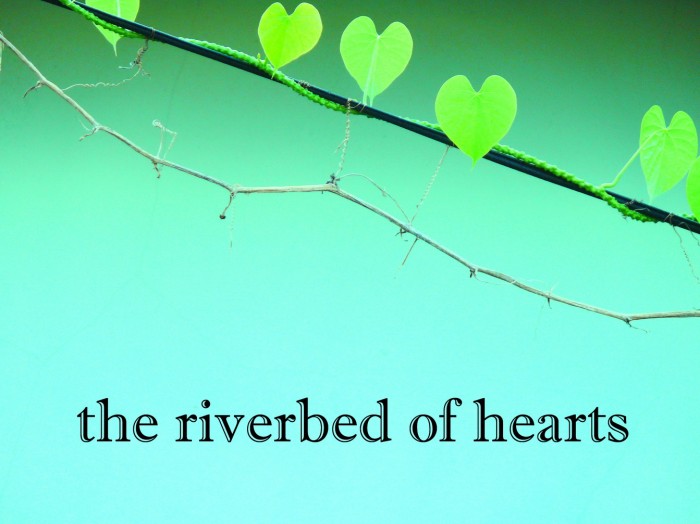 A trail of baby Heartians were making their way to the shimmering river, the smallest one coming in at the very end, closest to me.

They soon found their rhythm and before long, the babies were swiftly moving along, with purpose, even, but the smallest was getting left behind. I wasn’t sure what to do.

Save her! I heard a tremulous roar.

I looked up and saw a fierce-looking, savagely beautiful Heartian at the top of Heart Hill. Her tendrils, which had turned grey and were laced with hearts, tumbled all the way down the hill (which had all the power and grace of a mountain).

In doing so you will save yourself, said the Heartian goddess, and you know what that means.

I wasn’t sure I did, but I took the baby in my arms and together we made it to the Riverbed of Hearts, where I carefully laid her down.

The other Heartians were dancing in rapture. I was in awe at how they filled the space they were in with such ease and gorgeous simplicity. Then the goddess shook her head and laughed.

Now you know why you’re here, she said, her voice booming sonorously into the day.

Then she invited me up Heart Hill. She told me I had saved the group I was in by saving just one.

I wanted to become enveloped by her more than I can say, but I had already forgotten to turn my attention to the act of walking, and had so much more practicing to do.

I looked at Heart Hill one last time and turned around, noticing that the other meditators had returned.

I thought about the Heartians I’d just met, and all the other communities I might find in this long life, which have always been waiting for me. Then I lifted my right foot slowly off the ground.