Try to Define Me & I Will Die. 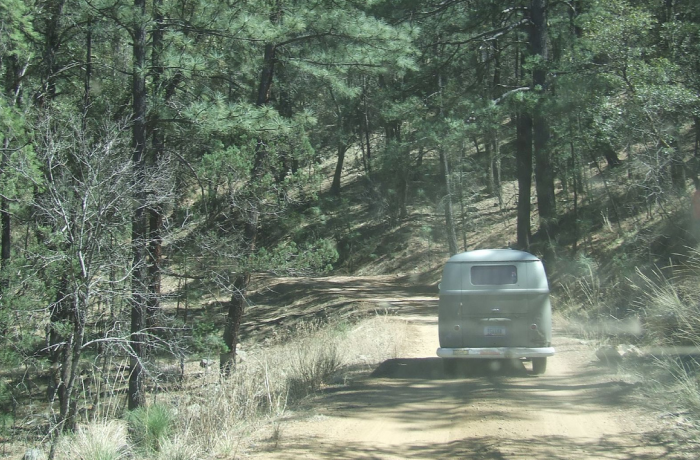 I mean, not literally.

We are processes. We are verbs. But always, we undergo this pull toward definition. This seeming need for identity. Deciding what nouns we are. Propping up identity with labels, titles, accomplishments and an array of descriptive traits.

We are vegan, liberal, sober, yogic, wise, and crunchy like a banana is orange.

Like time is an undefined shape seen by us as a straight line, so are we magnificent unbound occurrences, seen by ourselves as just a dude.

We’re an event horizon busting out shapelessly in wild growth, poised to drink every drop of dew they ever made, and run like demon children when they try to bring us the tab. We are every rule broken, and we have the golden snitch in our very hands. But in the mirror, we see only a cement mixer among cabbages or {insert your nouns and preferred modes of different from/ better than/ lesser than here.}

Our viewpoint defines us, too often, as essentially a lifeless thing. We kill ourselves inadvertently.

What is it going to take, to bust out of this noun cocoon into simple verb flight, awareness not of some more rarefied perfect state, but simply of the wonder we are, right now, as is?

My man Maya Angelou is talking straight when she says:

“Be present in all things and thankful for all things.”

That is the thing we’re missing. I’m missing. But only if Maya means it, you know?

Because if those are just words, crap, I’ll have an Orangina and the Quinoix Bowl, coffee on the side and what’s your wifi password here—you feel me?

But if she for one second has experienced and means living as an embodiment of gratitude and awareness than yes. Yeah, I’ll sit at her feet all day. 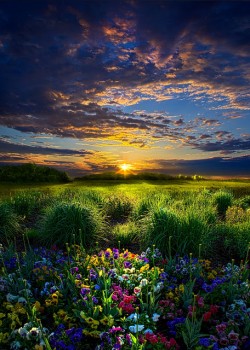 Remember Harold and Maude? When they’re in this field full of flowers and poor Harold identifies with the flowers because they’re all the same. She points out to him how brilliant and unique each flower is. But not because, Christ, this flower drives a fucking BMW or that one went to university.

Their gift is their inherent flowerness. Arriving here and existing is their accomplishment.

And part of the crisis, my friend, is that it doesn’t feel like a crisis.

I think I need to stop pretending to know who and what I am.

“You are unbounded Awareness. Bliss, Supreme Bliss—in which the universe appears like the mirage of snake in a rope. Be Happy.” ~ Ashtavakra Gita

Awareness. What Vonnegut called something very new on the planet. Human awareness. Our use of it defines us and the prevailing winds pull toward a very low default setting.

I want to meet the day wrapped in loving kindness and deep appreciation. I want to surround myself with grateful people. I want to remain a verb, and know nothing.

Because what if I get all aware and grateful, and my old friend self-righteousness rears his ugly head and then it’s all stink stink stink?

“Simple awareness; awareness of what is so real and essential, so hidden in plain sight all around us, all the time, that we have to keep reminding ourselves over and over:

It is unimaginably hard to do this, to stay conscious and alive in the adult world day in and day out.” ~ David Foster Wallace

David!  That link will take you to a speech he gave, stunning, on cultivating awareness in everyday scenarios. The difficulty! He hits it like LeBron whaling a three pointer with two seconds left. And I love and appreciate deeply anyone who can walk out of a philosophy graduate program at Harvard to write. Kudos.

I so do not manage to do that, ever. I’m super consistent in my lack of doing that.

But it rained on me the other day. I was walking under a grass roof (I live in tropical Mexico, go for it, haters) and when my hand touched the brittleness, the softness, the brown nature of the grass, I was suddenly okay.

“When did I stop being happy?” I seriously asked myself that.

Somewhere, I had gone to sleep again. I do not want to sleep. Touching that grass triggered a return to a more conscious state. The next time I go to sleep, it may not rain on me until I’m so old and crooked that there is no separating a moment of awareness from poignancy and regret.

Sleep has it’s own gravity.

I need to stay awake.

Once I was invited to do an installation for an art event which took place in a barn. It was in the space where animals used to have to wait, before they were taken to be sold at auction, one hallway down. I put wagon wheels on a canoe, added a mast and some prayer flags, and called the piece “Emergency Escape Vehicle.” I thought that maybe if the cows and chickens had such a getaway car, maybe they could make it. The compounded improbability of the vehicle arriving 35 years too late intrigued me.

Years after completing that project, I learned that I needed an emergency escape vehicle, too. I made a pretend VW bus to embody a collection of oddities. 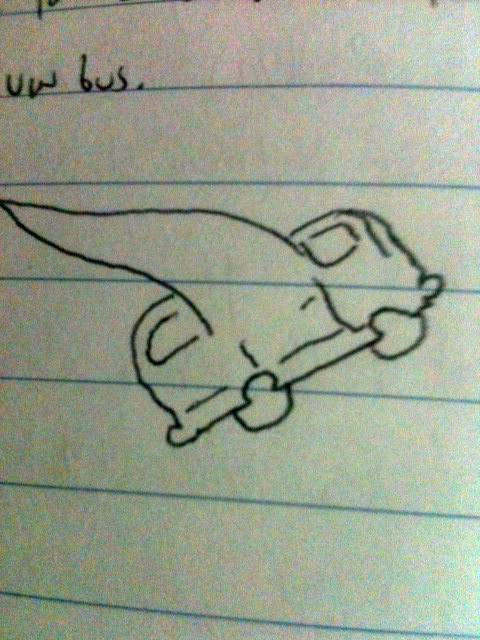 Like so many things in life, it needed an element of the fantastical to be real.

This bus can fly. It can be, for now, all the self definition I need. This bus is everything. It’s  the time Nancy put her head on my shoulder at the circus. The nine-foot alligator in the road. The steamroller made of tofu. The very pimple on big pharmacy’s butt. This bus is the proverbial talking monkey, bowing in a tophat and tails. She is the ice cream sandwich, handed to you at a funeral.

She is a four-wheeled wakeup call. She is a goddess. This bus is the Midlife Isis car.

As I catch myself falling into definitions about a million times a day, I try to think of myself instead as a bus that can fly.

The illogic of it is central. My belief in the reliability of my own mind is what needs to be shattered here. It can bow to the choice to indulge nonsensical urgings, and prompts from nowhere.  Maybe I’m inspired, maybe I’m insipid, and the bus is simply a sideways expression of materialism. News Flash: I get to choose. This emergency escape vehicle is either 35 years too late, or appearing at the exact right time.

How we see it is the game, in it’s entirety. But this isn’t news to you. And it isn’t positive thinking, just shoot me if I start spouting that drivel. It’s the super hard work of responsible thinking.

“Hey you, don’t help them to bury the light. Don’t give in, without a fight.” ~ Roger Waters

The pull toward sleepiness and comfortable modes of thinking is massive. Our culture has enormous gravity. But this work is so essential.