Why Sangha Matters to Me. 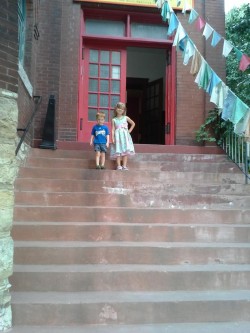 The first time I went to the Rime Center I had never met another Buddhist.

I had been studying Buddhism on my own for several years. I knew some people with a slight interest in Buddhism, but no one that really wanted to engage the practice with me.

I found the Rime Center due to it’s location. In 2009 I started working at a government building in downtown Kansas City and I happened to notice where the Rime Center was because it’s between my work and the highway. I literally drove right by it every single day on my way to and from work.

I had been practicing Buddhism for five years or so on my own, studying sutras and meditating for thirty minutes every day. I had learned about it through reading books on the subject, as I imagine many people do.

The philosophy really spoke to me on a personal level, along with the fundamental practices: nonviolence, compassion, cultivating insight and wisdom. And when I started practicing daily meditation I could clearly see the great benefits to my mental and emotional well being.

My devotion to Buddhism grew when my daughter Nissa was born, it grew some more when meditation practice helped me get through the end of my first marriage.

It was at this point that my solitary practice reached a critical mass. I wanted to practice with a Sangha.

I wanted to meet other Buddhists.

I didn’t really want to go, however. I had been studying Buddhism for years and I knew about the different sects and I wasn’t all that interested in Vajrayana Buddhism. The worship-like devotion to Bodhisattvas, the empowerments, all the bowing and such really didn’t appeal to me. I thought it sounded silly.

I wanted to experience either Zen or Insight Meditation.

So, I walked up a long stone staircase and entered the building, which is an old hundred year old church. I went alone. I had tried to get a friend to go with me, but several attempts to coordinate our schedules had failed, so I went alone. Later, I would take my daughter, but not that first visit.

There was a strong smell of incense, a smell that I enjoy very much. I wondered if I would smell like incense all day.

There was bowing and chanting and bells and it was wonderful. I fell in love with the Rime Center that day.

I wasn’t a regular yet, however. I only went occasionally that year.

But I did take Refuge Vows.

When I took these Vows, it did actually change my life.

I was inspired by my Refuge Vows to work harder in my Buddhist practice. Later I would take Bodhisattva Vows and become inspired to improve myself beyond anything I thought possible.

Vows do help. I don’t think they have a supernatural meaning, but they do give us strength and inspiration. If it wasn’t for taking these vows at the Rime Center, I wouldn’t be the person that I am today.

After my daughter turned four I took her to Dharma School for the first time.

She loved it. We started going together.

I would later learn that there aren’t a whole lot of Buddhist children’s programs in the country. At most Buddhist temples there aren’t really opportunities to take your children with you. I like having the opportunity to share Buddhism with my children.

After my son was born in 2010 we became regulars. I started volunteering in Dharma School a few months later.

After a few years I ended up leading Dharma School, it wasn’t really because of anything special about me, it was only because those ahead of me had gone away. I happily accepted the position.

I’ve been practicing with children for several years now and it’s been very rewarding to me spiritually.

Buddhism teaches the interconnectedness of all things. Kids seem to understand that intuitively. Maybe as we get older we accumulate more delusion. I’m not sure. But children seem to take to learning about some of the deepest Buddhist concepts very well.

I’m glad to say that in spite of their age differences, the children tend to get along very well.

There are very few arguments, and there is no fighting. They act like a community. That could be because of the very positive atmosphere of the Rime Center, or I suppose it could be because they are being raised by their parents with Buddhist values. Either way it’s a great thing to see.

It’s not my only community anymore. I’m also a member of the Ch’an Guild of Huineng now…and I think of elephant journal Writers as a spiritual community too.

Being in a Buddhist community make me want to be a better Buddhist. Knowing that I’m not alone motivates me on the path.