Dancing to the Rhythm of Water: Yoga in Peja. ~ Annea Hapciu 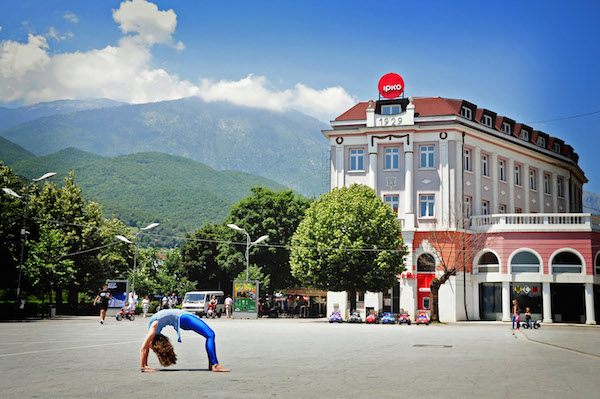 My sister and I came to Peja to continue our independent project of promoting our young country of Kosovo through yoga.

Last summer, we started the journey of shedding light to the good and beautiful of Kosovo from the capital Prishtina and this year we are traveling around the country.

We began our stroll from our aunt’s house in the center of Peja leaving our parents behind catching up with relatives over a cup of refreshing rose juice.

We had additional company this time, as our nine year old second cousin, Olta, took the role of a tour guide.

Peja was one of the cities that suffered most during the 1999 war in Kosovo.

The flames of war swept over the town with the incursion of Serb military, police and paramilitary forces who left behind houses burned to the ground following unprecedented violence and pillaging. Some inhabitants were left homeless. They eventually found themselves sheltered in refugee camps across the border in neighboring Macedonia and Albania, fleeing from the war atrocities and attempted ethnic cleansing, only to return following the NATO intervention.

Fourteen years later, the town is almost completely rebuilt. While the consequences of the recent past still haunt the present and even indirectly affect their everyday lives, the people of Peja, called “Pejon” in the local lingo, generally go about their life normally.

The country’s image is still burdened by these unfortunate historical circumstances.

In an attempt to escape this stereotyped post-conflict image, we take pictures of yoga poses inspired by a historical landmark, monument, ritual or landscape in town, write a story and share it with the world to show a different image of our country.

As a characteristic of the town and people of Peja, we chose the water color blue as an inspiration to yoga poses portrayed throughout the town.

You can almost feel the sensitiveness of the streams on the souls of the people that live here. They come down from the mighty mountains into a crystal clear river, gently running through the heart of the town—just as the water “pejons” have the ability to adapt to the natural or man-made misfortunes and enjoy the calm and peace once it settles down.

The first stop is the Haxhi Bey Hamam, the Ottoman times public bath, dating back to the 16th century. With abundance of water resources, the Hamam was a natural fit in Peja. Somewhere around 1462-1485, Haxhi Bey, a local leader, donated and built the bath for public use.

Today it is a relic of an ancient imported cultural ritual, a reminder of the way of life of our ancestors. The culture of hamams may have in itself been a form of spiritual cleansing. While the hamams are surely things of the past, if still operational, nothing would have taken their attraction in today’s modern Kosovo. 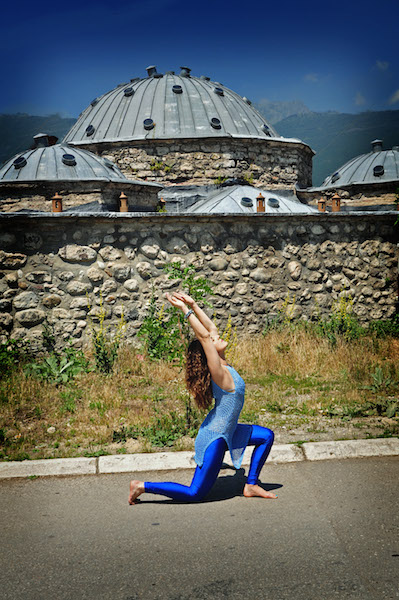 Virabhadrasana II Modified: To commemorate our “spiritual warrior” and the art of cleanings from self-ignorance.

Immediately across the road from the Haxhi Bey Hamam stands the Hamam Mosque, constructed long after the Hamam. Today was the beginning of the Muslim holy day of Ramadan, the month of fasting. The three old ladies sitting right behind the closed door were chatting in the shade while waiting for their husbands, who were inside. We could feel a wondering gaze as far as what we were up to.

As throughout all of Kosovo, Peja has plenty of mosques and churches, coexisting peacefully alongside in mutual respect, typical of the Albanian culture throughout the entire region they inhabit. Viparita Virabhadrasana: To celebrate the culture that never fought out of religious beliefs.

To get to the Ethnographic Museum of Peja, you pass the old bazaar known as Carshia e Gjate, still characterized with filigree and other handicraft shops. Through one of the narrow streets diverging from it, you reach the old green market,—with one of the best white cheese offerings—as well as poultry market.

We make a stop at cages full of chicks and chicken offered by the local villagers. Memories of times when we were children, when our grandfather bought us chicks just for the sake of play and would then raise them in the backyard, are still vivid.

In a matter of minutes we reach the Haxhi Zeka square, one of the main town squares. The house of Tahir Beu, now transformed into a museum, houses traditional handicrafts from the Dukagjini region. Various garments and traditional clothes from Rugova, the sub-culture of the mountains surrounding Peja, are also presented here. 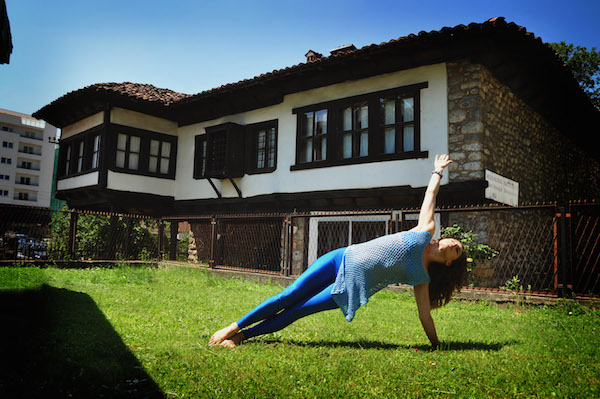 Vasisthasan pose: To remind the people in the town that their greatest riches our found in developing their local culture from within.

In a several minute walk, we arrive at the main square, referred to from the locals as “Korzo,” both due to the now non-existent hotel bearing the same name, and the local reference to the evening promenade. Typical of the Balkans, every night teenagers, young families with children and the elderly stroll calmly up and down the square.

Before high school seniors and college graduates go to a local restaurant to celebrate their proms, they too walk gracefully in Korzo, showing off their custom-made garments for their big day.

Urdhva Dhanurasana: To remind the people to be open, to not fear the unknown and to not resist change but embrace it.

This is the side entrance to the Haxhi Zeka Watermill. It was the first watermill built in Kosovo and in the region, with an upgraded technology purchased in Austria. The mill is remarkable for the history of Peja because it is here where the industrial economy had its beginnings. 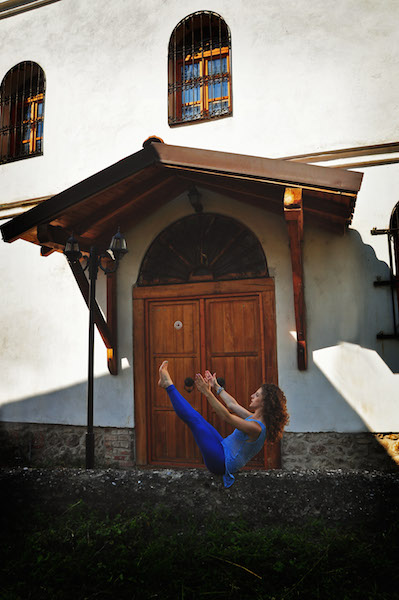 Navasana: To remind them, that in spite of the difficult economic situation they encounter, they still have an innate power “to build boats” and “take on tough waters.”

Our parents had already finished up the home-brewed rose juice when we arrived back at our aunt’s house. Before heading back to Prishtina, we drove up to the so-called 5th km of the Rugova mountains to fill up our bottles with fresh spring water. 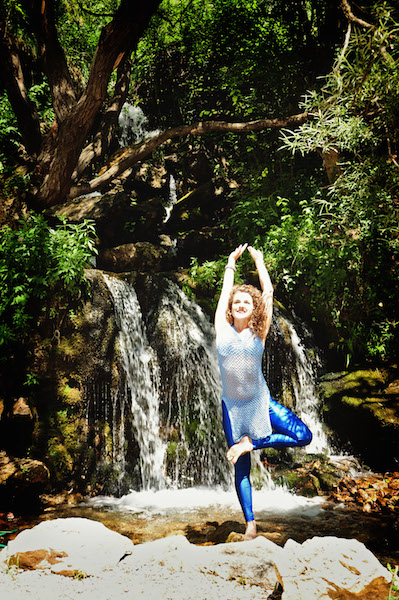 Vriksana: To reclaim their lost balance during the war.

While the large portion of Peja’s cultural heritage felt the wrath of war, the natural riches have endured. Their beauty transcends time, like the Rugova Gorge, one of the most prefered get-aways of locals and a must-see place for the internationals.

Fortunately, in spite of its popularity, quite vast areas of this beautiful canyon still preserve their natural innocence. It is home to hundreds of caves, waterfalls and springs and enchanting flora. Natarajasana: To passionately continue the dance…

As the day comes to an end, we dance to the rhythm of the waterfalls running down the mountain slopes, wishing the people of Peja to passionately continue their never ending Rugova dance.