Do You Have to Be a Vegetarian to Be a Yogi? ~ Cyriac Joseph

I was reading Jess Bender’s article “I’m Cheating on my Bacon with my Tofu.” and I observed that Jess was somewhat apologetic about her love for meat.

It seems that among the yoga community in the West there is a notion that being a yogi requires one to be a strict vegetarian.

Coming from the land of yogis I find this quite a strange idea. Yogis in India from centuries ago to today have been enjoying their meat without guilt. One therefore feels obliged to release this guilt about being omnivorous.

To check this understanding that yoga and vegetarianism go hand in hand it is important to understand the word “yoga,” even at the risk of sounding a bit cliché.

The word yoga derives from the word Yug or to yoke or join. The yogi is the person who is in pursuit of joining the inner observer and outer reality. The inner observer is the holder of identity and the perceiver of sensations that arise from the body, mind and the external world. The basic premise of yoga is that separation of the inner world of observer and the outer reality is an illusion. The destruction of this illusion is one of the main objectives of all yoga. The yogi aspires to experience the inter-connectedness of the universe and thus liberate herself from the suffering arising from desires of the external world.

While Buddha has said this unequivocally, we also know from our experience that suffering originates from the desires arising from our interaction with sense objects. When we interact with the external world, we get confronted with choices arising from our desires e.g. “Should I really eat that juicy, oily, salty bacon burger?”

These desires lead to choices that lead us further into separation and consequent suffering. The exercise of these illusory choices results in the hardening of identity and ego. We can therefore say that a yogic diet is one that exercises the least amount of choice.

If this is the definition of a yogi then who in this world is exercising the least choice in matter of diet? Who are the yogis who live most harmoniously with their intestinal and their natural environment?

The answer is clear from the desolation of the Australian outbacks, to the bone dry desert of the Kalahari, the lush rainforests of the Amazon and the icy worlds of the Arctic. The true yogis are the indigenous people of these lands. They exercise minimal choice in matter of diet. They eat what the universe provides them on any given day. If they get meat they eat it. If not, they make do with what fruits and roots they have foraged. Some of them like the Inuit, live solely on a meat diet because that is all they get.

The indigenous people of the world, like the Aborigines, are the ones following the true yogic diet.

Their diet does not arise from choice but from the easy and harmonious existence with their natural environment. They therefore suffer very little if they don’t get lentils from India, vegan coconut milk from Thailand, spirulina or flax seeds for garnish. The indigenous people of the world live gracefully with their environment not taking more than their due.

Now for the yogi fresh out of a Teacher Training living in California, the yogic diet is more of a challenge. How does she resolve the understanding of this yogic diet considering that she does not live in the outback but just a short drive away from Walmart?

The first step is to eat what is locally available. This might mean making a connection with a co-op that farms both livestock and plants sustainably. It might also be possible that some food might actually be available at a local departmental store.

The key is to get food that grows locally. Food that is not shipped over large distances using fossil fuels and is grown sustainably is ideal for a diet in harmony with nature. This closes a substantial amount of choices (like unsustainably farmed genetically modified soy) but opens up the meat department.

In the chain of nature, everything gets eaten up by something else including the human body, which will become food for maggots. In the yogic tradition I come from, we know that suffering during death is inevitable for all sentient beings and perhaps even plants. We also acknowledge that all creatures feel pain but the happier the animal or plant has been when alive, the better it is to eat both from a karmic and an intestinal point of view.

One of the key problems with eating meat in the West today, is that most animals are killed in inhumane ways. Fear faced by the animal during the process of incorrect slaughter results in stress induced hormones to spread in their blood and tissue. By consuming the meat of animal killed improperly, these hormones also enter our blood stream resulting in an inflammatory response in our own bodies. Thankfully there are yogic practices that can help you detoxify such meat using salt and lemon.

If you enjoy meat and need it (it has lots of iron, calcium, healthy cholesterol and protein), then the next step is to find food that suits the yogi internally. Since many of us live far away from our genetic origin we need to eat what will work best with our gut and our genes. There is one good way to find that.

The old adage of the proof of the pudding is in its eating works well.

As a yogi, one needs to be mindful of how well a particular food moves through the gut and exits out the next day. If eating a particular kind of meat gives you bloating, gas, constipation or diarrhea then that kind of meat or plant most probably does not suit you. Also be aware of your state of mind as the food passes through you. If it makes you aggressive, depressed or afraid then the food might not be for you. If it goes in well and comes out well then you can be sure that the food works well for you.

Vegetarianism has got associated with the yogic pursuit largely due to its teaching in modern times being monopolized by the Brahmin caste in Rishikesh and Mysore. The logic for vegetarianism is that consuming meat excites the mind and body and hinders the meditative process.

However the history of yogic enlightenment does not support this statement. Enlightened master like Chamaripa (the cobbler saint), Dhobipa (the washerman saint), Matsayendra Nath (a fisherman), Janaka (the Warrior King) or Lord Padmasambhava were not of Brahmin antecedents and one can safely say that they would have eaten meat.

In the Mahaparinirvan Sutta it is said that Lord Gautama Buddha ate Sukkra Madda (pig soft). It is also not true that Indians by and large are vegetarian. A survey by The Hindu reveals that about 60% of Indians are non-vegetarian. Leaving out the Brahmins most Indians including Hindus eat meat and some communities will also eat beef.

Finally, the great enlightened Saint Sai Baba of Shirdi was a lover of lamb biryani (a rice dish with chunks of meat cooked slowly to deliciousness) and would often prepare huge biryani feasts for his disciples and devotees. When asked once as to why he ate meat as a spiritual person, his simple answer was “because it suits me.”

So dispense with the guilt, forget what is written in the books and listen to your gut with mindfulness. 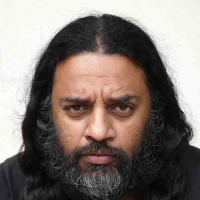