How Prenatal Yoga Kept My A** Tight & My Labour Less Painful. ~ Jess Sheppard Warning: some slight naughty language ahead.

I was blessed with open hips. I have had yoga teachers claim envy over my half pigeon—I can lay flat like roadkill; nose to the mat.

This allowed me to birth my son with slightly more ease than if I had tight hips. But I also nurtured and worked with my natural openness through prenatal yoga to ensure I could create a better labour for myself.

I have been a devotee for about six years and a teacher for almost three. This allowed me the opportunity to not only do research for my own classes, but also for preparation for that next big step—growing and delivering a human.

(My first words when he showed up were, “Holy shit—we grew that!”) I do not have that “perfect” yoga body.

In my family, part of open hips means having hips. And thighs, boobs and a little belly. Despite all my best efforts to conform to society’s preferred imaging.

And ironically, creating a human has made me appreciate my less than “ideal” body that much more.

I practiced throughout my pregnancy. I even taught up until the 30-ish week—and had planned on teaching for another few weeks. I believe (and know) that being fairly diligent with my yoga practice helped my body keep some semblance of shape (read: tight ass) as well as help my delivery and recovery after (read: less painful).

I didn’t hit the mat everyday and when I did it wasn’t always a long, in depth visit—but I moved. And I genuinely believe that’s the main thing.

Even if you’re new to yoga (and knocked up) you can start now and find results. 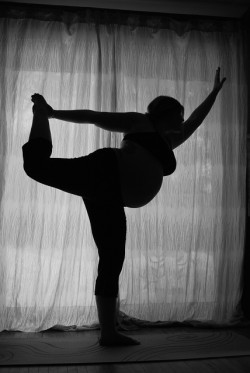 Start slow, join a prenatal class, use the internet to find some basic easily explained asanas, or poses. There are lots of great resources and options out there. If you’ve got an established yoga centred chunk of your life, prepare to modify.

And maybe one more time.

First I lost any pose laying on my belly—obviously. Then my twists started to slip—and I love a good twist, that full wringing out feeling. My forward fold faltered, and then my back bends began to give up the grudge (oh a good deep back bend is heavenly). So as someone who knows her body, as do most people who have been doing something physical for quite some time, I learned to adjust.

Like when I couldn’t reach as deep into ‘dancer’ because of the little being doing somersaults in my belly.

But it was hard.

I’m what my mum calls a “competitive Buddhist.” That means I try really hard to live the life but I am still undoubtedly human. And competitive. And take pride in how far I’ve come with my practice.

So when it was changing, my soul took a mini beating. I had to remind myself of all those positive affirmations I tell students, and “good stuff” about each time you come to your mat being different—especially with an ever expanding belly.

While this may be the most tired you have ever been in your entire life (until those 3 am feedings start), get off the couch.

And you thought doing yoga would be the hard part. 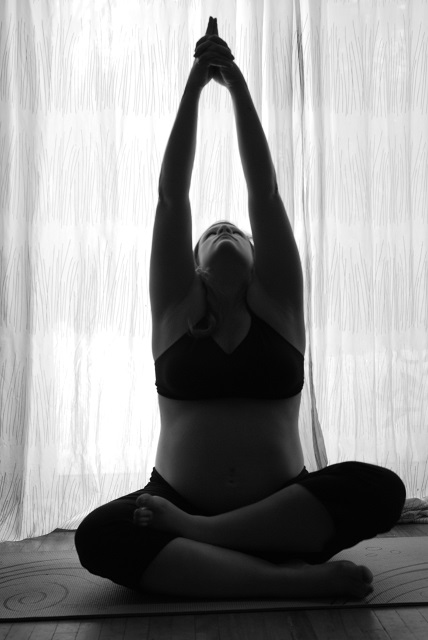 As well as my off and on yoga practice I did involve myself in some light cardio (literal fish out of water over here), and traded my comfy couch for a stability ball. Yes, one of those inflatable exercise balls. This is key to not only those open hips, but also to keeping that little bundle right where you want it (head down)—at least for 37-40 weeks.

The curve of our couch is ever so inviting, but it will also help move baby out of the “put-me-in-coach” position you’ll want for the big show. That nice curve creates the same shape inside and can actually move them out of where you need them to be for a safer easier delivery.

Sitting on the stability ball not only improves your posture, i.e. keeps babe in place, but also tones your core, improves your balance (something every pregnant woman needs), and opens those hips.

Those hips, oh those hips!

If you are still unsure why you want them “open,” here’s the thing. If you’ve ever seen a lady post delivery walking around—she doesn’t move quickly, nor have the best posture. Often times she’s hunched over and shuffling.

To get that lovely bundle of joy out you need to make room, and the best way to do that is assume “happy baby” pose. And if you can’t do it alone, don’t worry the nurses will help you. And because most of us aren’t accustomed to having our knees by our ears or in our armpits, our hips rebel—creating that lovely telltale new mum swagger. 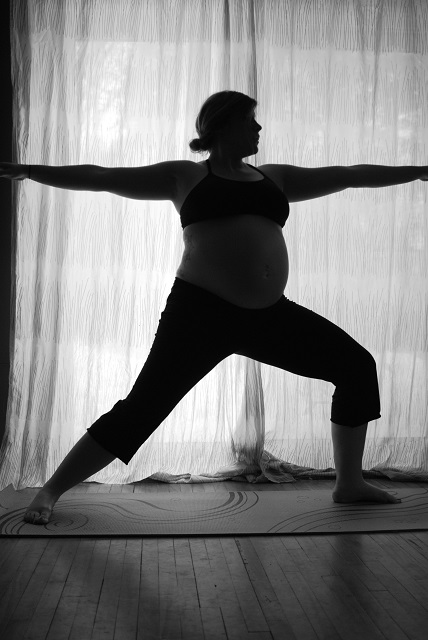 One last thing to help those nuisance hips—squat.

Pretend you’re a major league catcher in the final inning of the big game, and get down.

As long as you can.

If you already do some form of yoga, trade your couch for an exercise ball, assume the position, and squat. If you’re new to yoga seek out those resources that will make one of the most exciting (and stressful) days of your life that much easier on your body.

By staying with my practice my body stayed in good shape (relatively speaking), ready to flow again sooner, and recovered quickly from the hardest sequence it ever had. 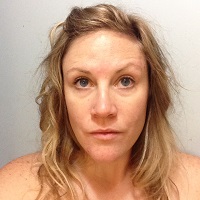 Jess Sheppard is a multifaceted woman; born with the Pacific roaring through her veins. She grew up in the flat farmland of Southwestern Ontario, returned West to her start, … Read full bio