In the Beginning Was the Self. 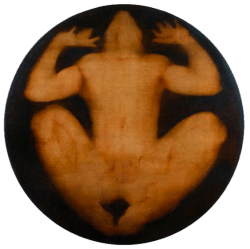 (An excerpt from From the Gita to the Grail: Exploring Yoga Stories and Western Myths by Bernie Clark.)

The yogi shouts, “Shivoham!”—I am Shiva. I am the creative intelligence that is the subject observing the whole world.

So, let’s look more closely at the Eastern map which leads the yogi to shout.

In the beginning there was the Self. One day, before there were any days, the Self had a thought: it thought “I.”

And as soon as it thought “I” it became afraid. (As soon as you have the concept of existence, you also have the possibility of non-existence.) But then the Self reasoned: “Since I am the only one that exists, what is there to be afraid of?”

Reassured by this thought the Self then noticed that it was lonely: “I wish there was someone else to be with!” So, the Self swelled and grew until it became as big as two people, and then it split apart, into a man and a woman. As soon as the man and the woman separated they immediately clung together, in the nature of male and female, and out of this first union came all of us: the human race began.

After a little while the female Self thought: “Hey wait a minute, this doesn’t seem right. I mean, he is like my brother and I am his sister and we shouldn’t be doing this.” So the female Self disengaged and ran away. The male Self, being a normal male Self, ran after her. She hid from him by turning herself into a cow, but he found her, became a bull and went into her. From this union cattle were created.

After a while the Self looked around, amazed, and thought: “Wow! All this came from me, and I am in all of this!”

One of the four main functions of mythology is the cosmological function. Its purpose is to put us in accord with nature and our surroundings.

The creation myths explain how we came to be and they explain our relationship to everything else we see. Knowing our place in the universe helps us to act properly towards the environment we find ourselves in, but there are many different myths of creation. Depending upon which map we follow, our attitudes and actions towards our environment and other beings may be drastically different.

The creation myth cited above is an old story. It is from one of the earliest Upanishads, the Brihadaranyaka Upanishad, which was perhaps created around 800 B.C.E., approximately the same time that the earliest Biblical creation story was rendered. (1) The Upanishads are a collection of mythic writings from a revolutionary time in India when the much more ancient teachings of the Vedas were being questioned and surpassed. (2)

Compare this to our creation stories in the West. In the West the Creator is not a part of creation, and as His creatures, we are not part of Him. The clockmaker is not the clock.

In the West we have what is known as a dualistic philosophy. To say, in the West, “I am God!” is the highest blasphemy. Jesus was crucified for saying, “I and the Father are one.” (3) The 10th century Sufi mystic, Mansur Al Hallaj, was also executed for saying he and his beloved were one. (4)

In India, if you were to go up to a guy on the street and say, “I am God!” he would simply shrug and say, “So what? I am also God.” In the East, non-dualistic views of the universe are common, but not universal. In the West, with our strictly dualistic view of creation, we believe that we are not divine, creation is not divine and therefore nature is not divine. If this was someone’s guiding mythology, the base map operating at his deepest psychic level, how do you think it would affect his actions towards creation, towards nature and towards his fellow man?

The Eastern myths tell us that we are divine, we are God, and God is everywhere.

We walk through the world and miss its divinity. Our task of tasks is to realize our identity with God. This is not the task we have set out for ourselves in the West. In the West we are told, through our stories, that we are not divine and God is not a part of us, so our task of tasks in the West is to come into a relationship with the divine. These are two very different imperatives that differentiate Eastern and Western spirituality and philosophy: are you seeking a relationship with God (Western); or are you trying to identify with God (Eastern)?

This basic philosophical understanding of the nature of the universe underlies much of the differences between the stories we will hear, East and West.

1) There is an ongoing debate over when the earliest Upanishads were compiled: the dates range from as early as 800 B.C.E. according to the 19th century scholar Max Müller, to whom most people defer, to as late as 500 B.C.E. according to Dasgupta. See The Shape of Ancient Thought by Thomas McEvilley, (Allworth Press, an imprint of Skyhorse Publishing, Inc.), 2002 for a more detailed discussion of the various views.

2) The Vedas, which means knowledge, are the oldest texts of Hinduism and represent an early form of religion that emphasized rituals and sacrifice along with many tales of a pantheon of gods. The uncertainty in dating the Upanishads extends also to the dating of the earlier Vedas: some scholars believe these texts existed in some form as early as 3,000 B.C.E. while others feel they were created perhaps as late as 1,000 B.C.E. Again, see The Shape of Ancient Thought by Thomas (Allworth Press, an imprint of Skyhorse Publishing, Inc.), 2002 for a more detailed discussion.

4) Al-Hallaj said, “I am the Truth,” which means I am God, because Truth is one of the ninety-nine names of God. See From Primitives to Zen: A Thematic Sourcebook of the History of Religions by Mircea Eliade, (Harper Collins), 1967, pages 523-524.

Bernie Clark is an author, yoga teacher, creator of the website www.YinYoga.com and author of The Complete Guide to Yin Yoga. He has been teaching yoga and meditation since 19… Read full bio