A Yogi’s 9-step Guide toward Action for Racial Justice in Ferguson & Beyond. ~ Jardana Peacock 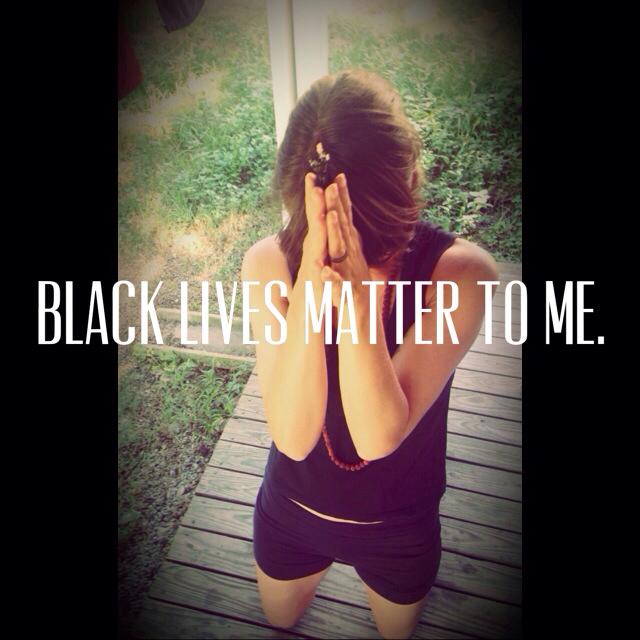 Calling all aspiring yogis and yoginis, yoga activists and healer types. Have you been watching what is going on in Ferguson?

Now is the time to put our bodies in mindful action toward ahimsa (non-violence).

Now is the time to use yoga to help heal the samskaras of racism, oppression and injustice in this country. Now is the time to learn, grow, and challenge ourselves for a new pose of solidarity with the people in Ferguson, and with the activists and organizers on the ground in Missouri protecting the basic human rights of residents and protesting police brutality!

I know that at times like these, we can be confused about how to take yoga into the street and into the public space for grieving, solidarity and action.

However, I believe that now is the time to live the eight-limbed path set out by Patanjali and be change we want to see in the world.

In light of the uprising in Ferguson, and the violent response from mostly white police toward residents grieving and protesting Michael Brown’s murder, we must take action. When the world is in turmoil, we can become immobilized, scared and confused.

The first step is to feel the weight of that.

As healers and yogis the next step is to put our yoga in action. Here are some action steps we can take right now.

1. Read and share resources and news about what’s really going in Ferguson to all of your social media sites.

Here are a few specifically for white folks:

For Michael Brown and Ferguson: Facing White Fears of Blackness and Taking Action to End White Supremacy by Chris Crass

Police Brutality Action Kit from Showing Up for Racial Justice

2. Change our profile pictures to stand in solidarity with folks on the ground in Ferguson and in protest against the violence being enacted by police onto people in Ferguson.

There are some downloadable ones in the Showing up for Racial Justice toolkit above. Or Instagram a healing yoga asana with hashtags #yogisforjustice #yogisinsolidaritywithferguson #BlackLivesMatter #JusticeforMikeBrown #SolidaritywithFerguson

Dedicate our practice to justice and an end to racism. Take moments of silence and for the yoga teachers: call for an end to racism and police violence inside our yoga studios and outside in our community work.

4. Set up a yoga demonstration for peace and justice in local towns, city centers or in a park, with other yogis and activists.

Work in tandem and in solidarity with other black-led efforts in the community. Start deepening and building authentic relationships with people from different communities. Here is an article about a yoga demonstration that I put together in Knoxville, TN a year ago for Trayvon Martin.

5. It’s okay to make mistakes because we will.

We are human and we make mistakes. However, if we say the wrong thing, let us learn from it and get back up and try again. Just like when we fall out of a balancing pose or handstand. When we practice, over time we get better, stronger and more confident of the benefits we reap from showing up.

6. Give to on-the-ground organizing efforts in St. Louis through donations to the organization for Black Struggle.

Here are some action steps we can continue to take throughout our lives.

7. Know the eight limbs of yoga and live by them.

What is the real history of racism in this country? Who are the fierce white women and men who have laid down a righteous path towards justice? How can we build onto the paths they have laid down? Get to know leaders of anti-racism, and start with these people: Anne and Carl Braden, Septima Clark, bell hooks, Abby Kelley, James Baldwin, Audre Lorde, Ella Baker, Howard Zinn, Bayard Rustin, Mab Segrest, Gloria E. Anzaldúa, Winona LaDuke, and so many others.

9. Get trained in anti-racism.

Unfortunately anti-oppression and anti-racism trainings are not a part of Yoga Alliance requirements, but they should be. As a sharer of a cultural tradition that is not our own, we must understand what cultural appropriation is and how to be the best steward of this yogic knowledge we have been granted access to. We must understand the difference between yoga service and yoga for liberation, especially as the Westernized yoga world continues to trend towards yoga charity work that tries to ease suffering without challenging structural inequality and injustice that causes so much suffering. We must understand how we enact racism and maintain oppressive power structures within the Western yoga world in order to dismantle them.

Here are some stellar antiracism trainings:

Institute for Survival and Beyond

As aspiring yogis, we are given a great social responsibility.

Let’s share the philosophy of yoga from the historical context from which it comes, created in ancient India by people of color. Let us stand up and resist the commodification of yoga and show the world why this ancient healing system is so vital, especially in times like this one.

As aspiring yogis, we are community builders, cultural workers and connectors inside and out. What a powerful role we can and do play! When we stand in the power of justice, in the truth—transformative pathways open up; this is the path of the yogi. Now, let’s follow this guide together and share with others because:

“Another world is not only possible, she is on her way. On a quiet day, I can hear her breathing.” ~ Arundhati Roy