Have you Heard What’s Going on in Ferguson? 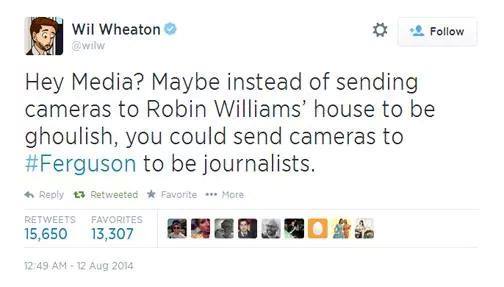 Elephant is a diverse community. We are reader-created. Many blogs here are experience and not fact or The One Right Point of View. We welcome all points of view, especially when offered with more sources and less invective, more frankness and less PR. Dislike an Op-Ed or opinion? Share your own take here. ~ editor

This story is ongoing and I may get some facts wrong because not all of the facts have been released. If I have made any mistakes, I apologize.

A suburb of St. Louis has practically turned into a war-zone.

And, although this is nothing new, peaceful protesters are being attacked by police.

My Facebook and Twitter accounts have been blowing up with news of the protest. Maybe it’s because Ferguson is about four hours away from here. Who knows.

Here are the facts:

1. An unarmed teenager named Michael Brown was shot and killed by police on August 9th, 2014.

He and a friend were being questioned by police, seemingly for no reason. Witnesses say his hands were in the air when the officer (whose name hasn’t been released) opened fire on him. Other witnesses say that they were having an argument.

No witnesses say Brown attacked the police. He was supposed to start college this week.

2. Protests started. People in the community started holding up signs that said things like “Don’t shoot.”

3. The Ferguson police responded with violence. Rubber bullets and tear gas were used.

4. Citizens responded by looting. There have been riots throughout the city.

5. Reporters in the area have been harassed by police.

Two were detained and a news team from Al Jazeera America was attacked with tear gas. It appears that local police have made great efforts to shut down media coverage. There is currently a no-fly zone in place, so news helicopters can’t cover the situation.

6. The riots are ongoing. The media isn’t covering it much because the tragic death of Robin Williams is still all over the news.

The reports say it’s practically a war in Ferguson. 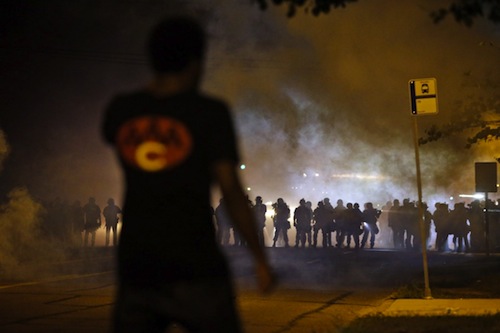 What can we learn from this? I have a few thoughts:

1. Militarizing police is a bad idea.

We’ve seen time and again that arming police like soldiers tends to make them act like soldiers. I respect police, but when they have the ability to unleash tear gas and tanks, it only takes a few bad ones to escalate situations.

I want police to be public servants, not an occupying army.

There was a time when S.W.A.T. teams and tear gas were only used in extreme situations. It seems like they’re used all the time now.

2. Why the hell is the policy to shoot first and ask questions later? We need better training in non-lethal force. If the officer had restrained Michael Brown, rather than shooting him, this could have all been avoided.

3. Should our law enforcement be allowed to kill people and not be held accountable? I’d like to see that officer put on trial. He killed a kid.

4. Looting is never the answer.

I understand why it is happening: when the law falls apart, chaos ensues. But looting does nothing to help anyone. It hurts the cause because it makes the protesters look bad—even the ones who aren’t looting.

From what I’ve heard, Martin Luther King’s marches didn’t include looting. This situation shouldn’t either.

I do understand that when you’re under attack, it’s hard to make the right choices. I do not envy the police nor the citizens of Ferguson. Innocent people on both sides are being hurt.

I wish the officer had been more aware in the situation. I wish he hadn’t thought of shooting as an option. I wish shooting an unarmed person was always a last resort.

I do feel compassion for him.

I’m sure he regrets what he did. And as this situation escalates, it seems increasingly likely that he will face some kind of retribution.

I also wish the citizens had been more mindful. They are overwhelmed by fear. It’s probably easy to turn to looting when you think the police might kill you. Who knows. They aren’t helping the situation.

I feel compassion for those citizens.

It must be hard to feel that those who are supposed to protect you are acting against you. I can’t imagine.

I feel compassion for the police officers, too.

Those who attacked peaceful protesters probably knew they were doing the wrong thing by following orders and they will have to live with that.

I feel compassion for everyone caught in the middle and for whoever has to clean up this mess in the end.

But, most of all, I am sad because Michael Brown isn’t in college this week.

I kind of feel bad for the Bill of Rights, too.

People in the area where I live worry about their right to bear arms being under attack. I don’t.

I worry about our right to peacefully assemble.

This nation has a proud tradition of positive change as a result of protest. I’d hate to see that taken away.