I Heard these Words & Took my Last Breath. ~ Robert Rabbin 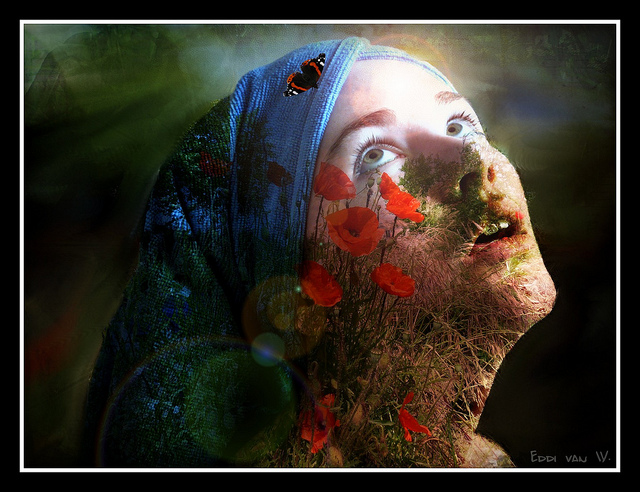 On a warm summer day in Santa Barbara, I had lunch with eternity.

With about 20 or so others, I was participating in a day-long session of self-inquiry and silence. The meeting was led by Jean Klein, an elderly European teacher of Advaita Vedanta, a philosophy of non-duality.

We were sitting in folding chairs or cross-legged on the carpeted floor or on the couch that had been moved to the back of the large living room. Jean was perhaps 80 at the time, white-haired and translucent, the embodiment of silence. He was like a waterfall of pure acceptance. Standing beneath his spray I breathed with lungs I didn’t know I had.

He would say a few words and then fall silent. Someone might venture a question. He would respond. Then more silence. We passed the morning like that. His speaking was itself a form of silence, each word coming slowly, with precision, from a deep well.

You could almost hear his mind falling like an empty pail into an invisible depth, filling, and then being drawn up by his careful voice with a few words, still wet with the silence of well-water. His English would sometimes slip or skip to French or German; it didn’t matter.

More intelligible than any of his spoken languages was his silence.

We stopped at about noon, and went outside for lunch. I sat with Jean and a few others at a picnic table. He and I were directly across from each other; separated by the two feet of tabletop. We ate slowly, silently, still appreciating the atmosphere of the morning. It seemed to me that we were all attentive, mindful of what we were saying and doing, respectful of others, listening with our entire bodies to the total environment.

It was natural, without technique or effort. It was simply a condition that had been established of its own accord.

We ate ice cream for dessert. Then, as we sat together on the benches with elbows and forearms collapsed on the tabletop, the world dissolved. I took a breath, and it was my last. I heard these words in the dissolution of everything:

“There is perception, but no perceiver! There is perception, but no perceived! All worry is worry about me and this body: ‘me’ is just an idea and not worth worrying about. I’m not the body either. I cannot be located. If I’m here, I’m everywhere. Love is this, no other, nothing other, only this wholeness. Everything I’ve ever thought is just ridiculous. My God, we should all just sit down and shut up and not move—that would really be the best thing. What are these electrical flashes and currents? This is all energy! Pure energy, vibrating and singing!”

I simply disappeared, but remained present, as an awareness.

I looked up and saw the sky and the clouds, but the seeing was with eyes that were not mine. I looked at the others, and saw myself. Everything was bright and radiant. It was so simple and so awesome. There were cognitions, but they were too fine for words, and they passed quickly, as a silent commentary on the pure feeling of just being, everywhere at once.

It seemed that everything was alive in a way I had never noticed.

The grass of the lawn, the dirt clumps at the base of a lemon tree, its bark; at the end of the bench was a woman whose hair shone; the air itself—all this was alive, breathing, growing, moving in something, a kind of force, a comforting presence. When I looked at something, it looked back. There was no separation, no difference. I did not own this seeing; it was not mine, not my eyes.

A cognition that came several times was how beautiful, how beautiful. I thought of all I had read and studied and learned, all I had experienced. Then I laughed.

I thought of the worries and fears and hopes with which I was often concerned. Then I laughed.

I thought of myself. Then I laughed.

It was pure laughter, joyous as never before, not because of anything, but in and of itself. Who was thinking? I don’t know. Who was laughing? I don’t know. There was no solid center, no place I could call “me.” Like salt in water, I lost my granular self.

It was the most marvelous calamity, the most terrific loss: a falling away of self, all in an instant.

There was just pure existence. If there was thought or movement, if there was discussion and laughter, it happened by itself, to no one in particular. Things seemed far off because they happened to no one, but everything glowed brightly, clearly, so full of itself, the presence.

So much was lost, and so much gained.

It was so apparent, how did I miss it? Here, now, in this very minute, as we are, seated at a picnic table, eating ice cream, is depth upon depth of loveliness and silent beauty. My God, how much I love this creation that I am!

There is so much order, intelligence and fullness in the creation that we are.

There is so much beauty, so much love, so much tenderness. This is what reality is. We find ourselves in this loss of self, in the opening to mystery, in seeing the luminous presence that brightens all things.

I can only affirm that we are this silent beauty, that we do live as the living presence in all things, that we are love.