My teacher is gone. ~ Leslie Kaminoff

Editor’s introduction: From the official web site, as of this moment: “…One of the world’s foremost teachers of yoga and a renowned authority on the therapeutic uses of yoga, TKV Desikachar continues to oversee KYM’s work in therapy as well as training and guiding the faculty of KYM.”

Just above, this rather poignant quote:

The below is an opinion—one gentleman’s experience—and can not be elephant’s “official” view. It is alleged, but it is important to share in the spirit of openness, transparency, and constructive dialogue.

PS: Here’s my outsider’s review of my experience of the talk mentioned below, from 2009. 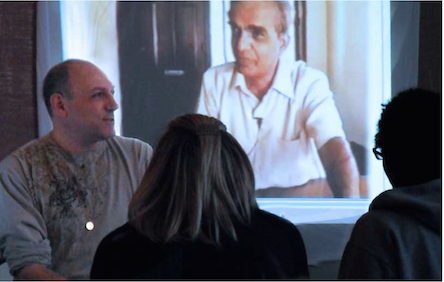 My teacher is gone.

Following the death last night of B.K.S. Iyengar after a brief illness at age 95, there was a vast outpouring of affection for a man who had realized his full creative potential during a long and productive life. His guru T. Krishnamacharya, also lived a very long life and taught well past the age of 100. The sadness surrounding Iyengar’s passing was not at the loss of potential unrealized, but at the loss of his living presence.

I lost my teacher years ago not to death, but to an advancing dementia that has turned his healthy body into a prison for a devastated mind. The cause of his condition remains a mystery to me; if his immediate family has knowledge of it, they have not publicly stated so. By writing this I am breaking an unspoken code of silence that has surrounded my teacher’s fate and that of his family.

I am immensely sad for the tragic turn that Desikachar’s life has taken. I don’t know if his condition was avoidable. But what is avoidable is the denial surrounding his gradual decline and the resulting damage to the teaching community he built.

Undeniably, the worldwide Yoga community has been deprived of another one of its great intellects and practitioners. My teacher, T.K.V. Desikachar, was an interpreter of ancient knowledge for modern times, a sensitive, practical man who valued above all else the close relationships he formed with students, colleagues and clients. My sadness is both for the loss of his living presence and for the lost potential of a great mind and decades of output that will never be realized.

Looking back, my teacher’s seemingly peculiar and unrealistic desire to promote the career of his troubled son Kausthub makes more sense when factoring in progressive dementia.  Desikachar’s withdrawal from public life and Kausthub’s corresponding rise to leadership at the Krishnamacharya Yoga Mandiram had severe consequences for generations of senior students.

Speaking only for myself, the transition felt surreal: I was losing access to my teacher at the same time I was being asked to answer to someone who had repeatedly revealed himself as unstable and dishonest.

The first time Desikachar’s condition became unavoidably obvious to me was the last time I saw him, at the Estes Park Yoga Journal conference in September of 2009. In retrospect there had been signs something was wrong a couple of years earlier. In August of 2007, I attended a weekend seminar in New York in which Desikachar repeatedly turned teaching duties over to his daughter Mekhala.  She did her best, but was clearly uncomfortable when inexplicably made the center of attention. I wrote off the incident to a desire on Desikachar’s part to promote his daughter’s teaching abilities. At the time, it never occurred to me he might have felt the need for help presenting his material.

When my friend Gary Kraftsow and I attended the 2009 Yoga Journal conference I knew he had not seen or spoken to Desikachar in many years.  We both watched in horror as our previously eloquent teacher stumbled hesitantly through his keynote address. During the prior three days I had attended Desikachar’s “Healing Through Yoga” intensive during which he seemed a bit tired and distracted, but was able to manage adequately when his wife, Menaka, or one of his senior students was beside him.

Then—during the keynote, alone at the podium—it was painfully obvious that something was wrong.

Desikachar’s storytelling and oblique references had always brilliantly led back to his main topic in unexpected and illuminating ways. Now, his stories simply rambled on and on in random disarray, with no integrating threads binding them together. It was clear he could only access long-term memories, while his fragile short-term memory and higher functioning were severely compromised.

During intermission, I went to where Gary was sitting and we stared slack-jawed in disbelief at each other, confirming what we had just witnessed. Most of the audience likely saw a kindly old man telling amusing stories, but there were at least a dozen or so people in the room who knew Desikachar well enough to be alarmed. Most notably, his wife and senior students who had been traveling with him could not possibly have been blind to his condition. How could they send him all alone to that podium in front of an amphitheater without the support he so clearly needed?

Feeling humiliated on behalf of my teacher, a rage built inside me…I wanted to confront them, but wishing to avoid making a scene in public, propriety got the better of me.  I spent the rest of that week at Estes in a state of profound loss I’ve carried ever since.

That’s the thing with dementia—you begin mourning long before your loved one dies.

So this week, as I followed the news surrounding the end of Iyengar’s life, all these memories and emotions have come to the surface. I felt sorry for Mr. Iyengar—not that his life was ending after 95 years of productive and influential work, but because this powerful spirit who declared,

…expired in a hospital bed with a feeding tube down his throat. I went fitfully to sleep with that awful, sad image in my head and dreamed vividly about finally writing many of the exact words you have just read.

Why turn the words of my dream into a public message? Why risk exposure and displeasing people I respected and honored?

I have a simple, selfish reason. It’s been unhealthy for me to carry this silent burden of loss and anger for so long. I share this in the hope of a healing that will keep the beauty of Desikachar’s teachings from being tinged with pain every time I mention his name.

My personal relationship with T.K.V. Desikachar and his teachings infuse so much of what’s positive about my life and work. I know that countless others feel the same. When my teacher’s body finally looses its grip on his diminished spirit, his death notice must be more than “died after a lengthy illness.”

He deserves more than that. We all do.

I hope this truth serves his memory well, as I will continue to do—by teaching what I have learned from him.