Sitting on Top of Our Tiny World. 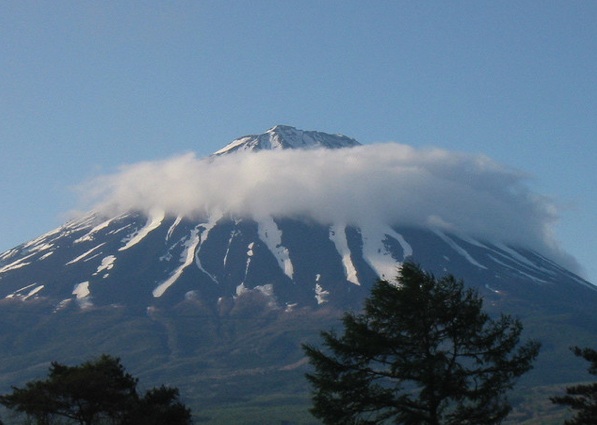 During the time I was living in Japan, I had the opportunity to climb Mt. Fuji.

The mountain has a lot of historical significance in the Zen and martial arts worlds, as well as paranormal groups (Google Japan’s suicide forest), and I was excited to climb it from the moment I set foot in Japan.

The most popular way to climb Mt. Fuji, is to take one day to climb about three quarters of the mountain, stop at the small hut there for a few hours of sleep, then leave during the night for the summit climb so you can be on top to watch the sunrise.

This was how I planned to climb Mt. Fuji.

Because of the drastic change in altitude between the bottom of the mountain and the summit, the weather can radically change during the climb, so a little bit of preparation is necessary. I remember putting on my old Marine combat boots, packing the gear I thought I would need into my Alice pack, and then starting up the mountain.

I was kind of lucky with my timing and went somewhat late in the season, which meant there weren’t many climbers on the mountain with me and I could take the time to appreciate the scenery. One of the best parts about the climb is getting your official climbing stick at base camp.

Along different parts along the trail, there are Zen and Shinto monks who will burn little brands into your stick for a hundred Yen or so. They will also give you a blessing in hopes that your journey will be safe and enlightening. One of the monks even let me burn a brand into my stick, but mine didn’t look nearly as good as his brand.

I still have my stick over 20 years later.

Since Mt. Fuji is a volcano, the ground is made up of coarse, volcanic rock that wreaked havoc on my boots and the end of my walking stick, but also made this pleasant crunching sound when stepped upon.

The mountain has the nickname cloud catcher because it seems like the summit is always hidden by white fluffy clouds and at some point during the climb I entered the cloud cover which was like stepping into a different world.  Visibility dropped to about fifty feet, and the fog like soup I found myself walking through gave the mountain a somewhat eerie feeling, especially once it became dark.

I finally reached the hut where a very nice lady gave me tea, stuck me under giant fur blankets, and then told me I would be awakened at two in the morning so I could summit in time for the sunrise. It was a very good night sleep and I didn’t want it to end, but I was anxious to reach the summit, and I didn’t want to miss the sunrise.

About an hour after leaving the hut I started to get nauseous and was developing a nasty headache. I was showing the first signs of AMS, Acute Mountain Sickness. My climb was slowing down because of it, and the sky was getting brighter and brighter. It was becoming a race to see if I would reach the top before the sun came up. I made it in time, but was also very happy to stop climbing.

There were some people scoping out their positions to watch the sun come up, and I found a pretty good spot between a guy from Russia, and another man who I think was from the Netherlands.

It was a surreal experience.

None of us spoke the same language, and none of us spoke Japanese well enough to communicate yet here we were on top of this mountain together, watching the sun rise. As we sat there watching the sunrise, a monk came around and burned a special brand into our sticks showing that we had made it to the top in time to see the sunrise, and I remember thinking about how vast and big this planet is.

There are countries I probably would be hard pressed to find on a map, there are billions of people living today whom I will never meet, there are more places on this planet I will never go to than places I’ve been, there are people speaking languages I can’t identify let alone understand and there are so many things happening right now that I’m unaware of.

Yet at that moment, the three of us, from various corners of the globe, in a country that wasn’t our homeland, sat as friends watching the sunrise on a brand new day. Maybe the planet isn’t so big after all.