The Light of Yoga. 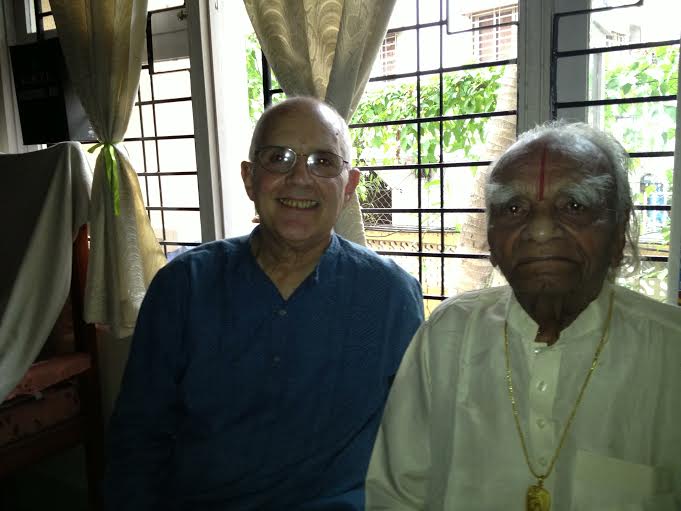 Last fall, I had the honor of meeting with B.K.S. Iyengar, who died recently, at his yoga institute in Pune, India.

Dressed in a crisp white kurta, a perfect match for his snowy hair and famously majestic eyebrows, he had graciously squeezed in a visit with me between institute business and his receipt of an award from the local government.

At age 95, he had taught a yoga class that morning.

In our conversation, as he commented with enthusiasm on yoga philosophy, his latest book and other topics, he was sharper than the proverbial tack. And afterward, when I followed him out to a waiting car, his back was straighter than mine and he descended the steps as nimbly as most people 30 or 40 years his junior.

All of which is remarkable enough, and a sufficient endorsement of the yoga practices he made so popular worldwide that it can safely be said that most of the millions taking yoga classes today were influenced in one way or another by his work. But his mental and physical condition the day we met is even more remarkable—borderline miraculous perhaps—when seen in the context of his early life.

Born in 1918, Bellur Krishnamachar Sundararaja Iyengar suffered from a panoply of illnesses as a child, including typhoid, malaria, influenza and tuberculosis.

Anyone predicting he would live even a third as long as he did would have been considered a cockeyed optimist. But when he was 14, his sister’s husband suggested that yoga might strengthen the youngster and improve his health. That brother-in-law was Tirumalai Krishnamacharya, who might be considered the Thomas Edison or Steve Jobs of what has come to be called “modern postural yoga.”

Young Iyengar took to Krishnamacharya’s blend of tradition and modernity immediately, and was teaching others by the time he was 18. In 1947, his guru sent him to teach in Pune, where he later established the Ramamani Iyengar Memorial Yoga Institute (named for his late wife), where countless Indian and Western yoga teachers received some or all of their training.

As Yoga Journal once accurately stated, “It’s hard to imagine how our yoga would look without Iyengar’s contributions, especially his precisely detailed, systematic articulation of each asana [yoga posture], his research into therapeutic applications, and his multi-tiered, rigorous training system which has produced so many influential teachers.”

He also famously invented the use of props—belts, blocks, blankets and the like—to help students enter into difficult postures without strain or risk of injury.

Iyengar was introduced to the West in the 1950s by the great classical violinist Yehudi Menuhin (who, it should be said, also brought us the sitar virtuoso Ravi Shankar). In 1966, he published his seminal book, Light on Yoga, which has since sold over a million copies.

His American impact began in 1973, when a musician named Mary Palmer, who had studied with the yoga master in India at Menuhin’s suggestion, arranged for him to teach at the Ann Arbor, Michigan, YMCA. Courses, teacher training programs and certification procedures, institutes, international conventions—it all evolved rapidly as supply met demand.

Through it all, Iyengar himself never stopped practicing his own yoga routines, and he came quite close to fulfilling the prediction he made six years ago: “I will still practice ’til the last breath of my life so that I do not become a servant of the mind but, rather, the master of the mind.”

Note that emphasis on the mind.

It is perhaps ironic that the man who might be most responsible for bringing systematic rigor to the physical component of yoga, and whose name is associated with the stretches and bends that have come to virtually define modern yoga, would also state, emphatically, “Our practice of asana is not for the sake of the body. That is only a support.”

People who Google Iyengar in the future will marvel at the photos and videos of him entering effortlessly into impossible-looking asanas at different periods of his long life, especially in the light of his sickly youth.

Those of us who care about preserving the rich legacy of yoga in its fullness can only hope that he will be remembered not just as an asana master, and not just as a role model for vigorous and productive aging, but as a guru who recognized the complete range of the tradition’s practical, philosophical and spiritual glories.