Why Do They Stick around When They Won’t Give You Anything? 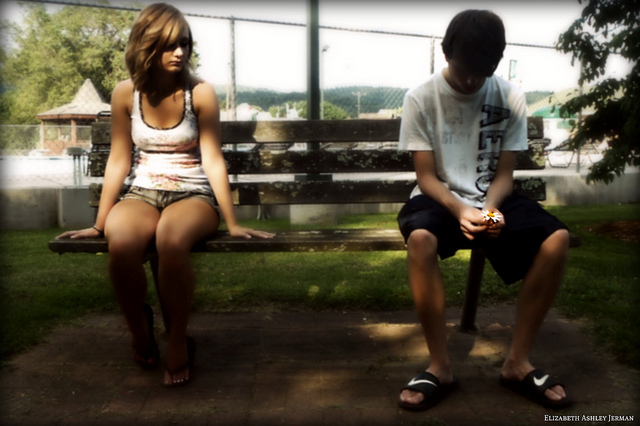 Have you ever had someone who shows up over and over (or never goes away), says how much he or she loves us, but gee golly whiz, it seems there is something we keep doing that results in the relationship being at a standstill?

The standoff could be the battle between egos and what each person wants from the other.

Blame—when thrown around in a relationship—is an excuse for the person doing the blaming to do nothing or change very little.

Many of us can complain, blaming the other person in how they do something within the relationship to piss us off, or in many cases how they won’t do anything to please us. Taking out the trash can become about who can out maneuver who in a relationship.

I had someone who would show back up in my life and tell me he loved me. He would say he wanted the relationship to grow organically. I agreed, but I didn’t understand what he really meant was he didn’t want to lose me, but was unable to commit to giving me anything I wanted.

I’ve also been with someone with whom it became a battle of wills to arrange to see each other at times that worked for us both. He would be upset that I didn’t seem to understanding his work schedule, or whatever activity at the moment superseded our spending time together (we lived at a distance—it was hard to coordinate).

As I was blamed, I blamed them too. The harder I tried to get something from each of them, the less I received and the more hurt I became. It was a tug of war.

It can be hard to recognize that we may have different values and even a different view on relationships than our partner does, leading to a standoff. We may even discuss this with them until we are blue in the face and nothing changes.

My solution for years was to just stop giving a shit and remove myself from the situation. I’d become numb, so I could gain control of myself back and leave without feeling bad.

Numbness is the great pretender. When blame for not getting what we want is set on an object outside of us, we aren’t dealing with ourselves; because of that we don’t want to feel the pain of our own decisions.

I stopped this exercise a few years back, once I realized that I kept trying to force the issue or control a situation through building a wall or blaming others. Instead I decided to connect with myself.

If there is someone in our lives who keeps showing back up empty-handed, or we have a relationship where an arm-wrestling match over taking the trash out happens weekly, perhaps it’s time to take a different approach.

Here are some guidelines:

1. Figuring out our non-negotiables

Many of us have no clarity around what we truly need and cannot compromise on with a partner. We’re so caught up in an image of what we think is right, we never check in to see what we really need from someone else. Once we figure that out, we can stop all the battles for control about everything else that is negotiable.

2. Realizing that force will never win

Force—whether it’s silent or loud—will never win anyone to our way of thinking or make them happy about giving to us. If the situation or need falls into the non-negotiable, we must stand in a place of authenticity, love and kindness—first for ourselves and then for the other person.

There is no other way.

Sometimes this means a new beginning and at other times it means the end.

3. Settling when it’s all we know

As an adult, we may find our parents were right, about things, such as: “Don’t touch the hot stove.” Or by saying, “a woman’s work is never done, or a good man/woman is hard to find”

The first is practical advice, but what about those of us who heard words from our parents, but their follow-through in action was opposite? Now  the other two statements, could be our parents limited thinking passed down to us or, perhaps it’s how they treated their partner.

To break the cycle of not getting what we need from a person, who stays or comes back repetitively has little to do with them in remedy. It’s up to us, to understand why we allow it and to take action for ourselves.