3 Steps to Rid Ourselves of Monstrous Thoughts. ~ Victoria Cox I have a confession to make: I have a couple of monsters living in my head.

They have been squatting here for quite some time but they are pretty clever and have become adapt at pretending they don’t exist by camouflaging themselves among my day-to-day thought patterns.

It may have taken me a while but I’m finally onto them. I even have pet names for them and have been silently watching their antics for the past few months. Before you stop reading and place a call reporting me to the nearest mental institution, let me explain.

Have you ever had a vicious thought pattern that streams itself on a loop throughout your brain?

I have two of these monstrous thought patterns that scroll through my head like those incredibly annoying “Breaking News!” tickers on cable TV networks.

One of these monsters I like to call the Weekend Werewolf. He’s obviously got another gig going on during the week because he only shows up late on a Friday night and has vanished by Monday morning. His favorite trick is to lie dormant until early Saturday morning when he pounces with a vengeance.

“What’s going on for the weekend?”

“No plans you say? Really? What a loser you are. Why don’t you get on Instagram and see what fun everyone else is having?”

At this point he is howling with werewolf-y joy and doing cartwheels around my head whilst I pull the covers up over my head and stick my fingers in my ears.

The second monster only likes to show up when I’m trying to write. I like to call this one the Wicked Witch of the Word. There is nothing she likes better than a blank page and a blinking cursor. “So, what are we going to try and write today?” she cackles into my ear, “Because, really, who is going to read it? And who really cares what you have to say? If I were you I would just give up now and leave it to the experts.”

I bat her away but she is nimble on her broomstick and this witch is nothing if not persistent. If I manage to get anything down on paper, she pulls out my deepest insecurities from the depths of her black hat one by one and spits them out at me with vitriolic glee.

There are large variations on these themes depending on what is currently going on in my life, but you get the general idea. I’ve been putting up with their behavior for far too long and I’m not taking it anymore.

There are three steps that I have found that help me get matters into perspective and recognize when the monsters are running the show and not me.

The first step in trying to break through these negative thought patterns is to give them a name.

I think of them as monsters but they can be anything you want them to be. Perhaps an elderly aunt that was always scowling and angry at the world, a fictional TV character. Anything at all that represents how they would look to you if they had a physical body.

It may seem ridiculous but in naming them you give them an identity, they become a “thing” rather than just an endless loop in your brain that you think is really you. It’s not. By objectifying them, you weaken their hold over you. Objects can be placed in boxes, wrapped with tape and thrown into the ocean. Abstract terrifyingly negative thoughts cannot. It may seem like a trivial distinction, but believe me its not.

I spent so many years at the mercy of these two terrors and as a result spent most weekends in a heightened state of fear of missing out and with absolutely no written content to show for it. The very thought of sitting at the computer would make me convulse into a wobbling pile of insecure jello.

Step number two is to have some fun with it.

The more ridiculous the names or characters you come up with the less intense and soul destroying it will seem when they show up. A terrible case of anxiety doesn’t seem quite so terrible if you imagine the anxiety as the Marshmallow Man from Ghostbusters wobbling around inside your head.

Of course some negative thoughts are simply too serious to laugh at, but it’s actually the personification of the thought that lessens its power. So for example, grief—a seriously debilitating emotion that needs space and time to work through. By coming up with a name for it, even a code word then you can start to address it as such.

The third and final step is acceptance.

Accept that there are monstrous thoughts in your head and that is perfectly normal. It’s part of the human condition—the thoughts and emotions will come, but they will also go. Recognize their temporary nature. Thinking them doesn’t make you a bad person. It’s getting attached to the thought that gets us into trouble.

When we start to believe that we are what we think we can send ourselves down the rabbit hole. I’m not advocating that you simply scatter in the opposite direction when one of these thoughts comes up, that’s called denial and he’s a monster too.

Just recognize it, name it and then ask yourself why it showed up today? In gaining a broader perspective about why you are thinking this way and what you need to learn from this you are effectively pouring monster poison in your brain.

Monsters don’t like you to question why they are there, they just want you to scream and be terrified. In figuring them out they lose their scary powers and just become regular thoughts.

So who are your monsters? What would you call them and what do they look like? What would your life look like if it weren’t ruled by these debilitating thoughts? In answering these questions we can start to recognize the futile nature of these types of thought patterns.

Gradually, over time their darkness diminishes and there is nowhere for the monsters to hide. They simply remain where they rightfully belong, as a figment of our imagination. 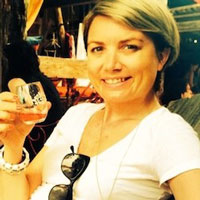