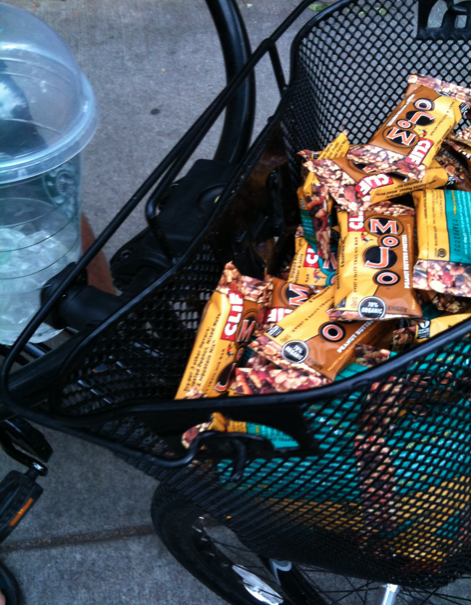 Ciclovia (Green Streets) in Boulder is a wonderful idea. If you don’t know about it, it’s an international movement to take back streets for human beings–pedestrians, arts, markets, cyclists. It’s fun and takes place in something like 80 cities, including Manhattan, around the world. It’s super inspiring.

The Boulder edition is all thanks to the hard work of Hillary and her crew. After walking through it, I’d love to share a few observations.

It’s really commercial. Here, it’s all about booths for businesses. Yes, I saw a wonderful little arts piece, and there’s lots of activities for children. If you’re a parent, Green Streets is a godsend: climbing wall, kayak pool, food, games.

Boulder is the epicenter of Natural Products–and Steve Hoffman yet again put together a strong natural products tent and section of Green Streets. In the whole thing, I was offered one “real food”—an organic apple from Door to Door Organics. The rest was plastic packaged crap, much of it with buzzwords like GF (which is great for those who need it, but often is full of sugar and processed crap, gluten-free does not equate with healthy, do not trust corporations unless it is their desire to make money off selling crap that you’re trusting in).

At the end of the market was an un-invited truck with farm produce. I said, wow, real food, the only I’ve seen here! Well, I got this apple. And he said, that’s the statement I’m making. I saw that his watermelon had seeds and said I love that! Why don’t watermelon have seeds, anymore?! He said it’s they can’t reproduce. He told a story about going to New Mexico and how a few different areas didn’t have any seeds. In the spring.

The world is hanging in the balance, folks. It’s a wonderful world, and it’s full of suffering. And in much of the US we just drive our big trucks and buy plastic and wear plastic and live off the fat of the land. Well it ain’t sustainable. If we want to be truly great, we need to lead the way toward a responsible, aware future.

People shrug and say “people don’t care.” Including me. The NFL didn’t care about Rice beating his wife until they were forced to by the media. A cop had sent them the tape four months prior. Then, the NFL was forced to pretend to care. Same with the media, which showed Rice 24/7, suddenly, not covering how the GOP refused to pass go on a bill that would end Citizens United. No one even knows that happened.

I feel so sad, sometimes. I didn’t used to care, but I learned stuff, bit by little bit. Now I care too much, to the point that folks get this glazed look and walk off. I care that the most famous climbers in the world is, with the help of sponsors and filmmakers, making danger look cool to children.

I care. Do you? I know folks will care if we decide it’s cool to care. The coolest thing is to care about what you care about even if others don’t seem to care about it. Be cool.