Don’t Dis the Body—It’s the Handiwork of a Genius. 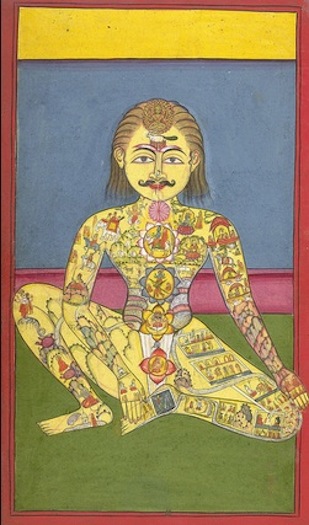 I heard a spiritual teacher tell his flock they were not the body.

He said that with a bit of a smile, as if the mere thought of identifying with the body was laughably preposterous. He spoke with such confidence and authority. He announced that everyone was pure awareness and that the body was illusory, not real.

I felt sorry for his students, poor things. The teacher is a dickhead.

I do know that at the quantum level the body does not exist in the way we experience it through our senses. I know from direct meditative experience that the body is reducible to empty space. However, I’ve never met anyone who lives in and as empty space.

It is illusory only at a level of manifestation we may not live in on a daily basis. So dear teacher, if you are going to say and mean that you (not your students nor me) are not the body, great—please get off the grid. Head for the hills and disappear into the empty space.

The genius who invented bodies and empty space and the awareness within it and with whom I have had many intimate conversations confirmed my appraisal of the teacher as a dickhead.

The genderless genius, the creator told me that the problem we have with the body is that we don’t understand it, that we are afraid of it and in some ways, dislike it.

That’s where body-shaming religious priests of all kinds and stupid spiritual teachers find their niche: they exploit our misunderstanding, fear and dislike of our bodies, especially the sex and sexy parts and the body’s capacity for erotically-charged, mind-blowing orgasms, tidal waves of transcendent sensation so powerful as to redirect the orbits of planets.

We are no more the body than we are not the body says the genius inventor of both body and not-body. Body and not-body, form and formlessness, fullness and emptiness—these co-exist. They are pairs of lovers who cannot exist on their own. They would perish in isolation.

If we get off the concept train where the body is a thing and begin to look into it, see it, appreciate it’s marvels and mysteries and beauty we’d quickly align with the genius inventor of it all. Who, by the way, delights in the bodies and the spaces, the emptiness and the fullness, the pure stillness and the frenzied chaos of earthshaking orgasmic eroticism that electrifies everything within a thousand feet.

Let’s take a brief look at the body—the actual body—not the conceptual body this teacher is so afraid of and obviously knows nothing about. As you read these snapshots of the body, please take a moment to really visualize and experience each picture; don’t just read it as a bit of information. Rather, feel each part of the body and all its processes.

How many of them are you consciously aware of? Let yourself be enchanted by the genius of it all, having been created from nothing. Stop and count to 2.5 trillion, or 10,000 times or 200 specialized types of cells. Marvel at how amazing the body is! It’s a constantly changing circus, an ecosystem as big as the cosmos.

For about 30 minutes, every person on Earth was a single, solitary cell. Then, in just nine months, a fetus transforms from this single cell into a being with trillions of 200 specialized types of cells.

There are 2.5 trillion, give or take, red blood cells in our body at any moment. To maintain this number, about two and a half million new ones need to be produced every second by our bone marrow. That’s like a new population of the city of Toronto every second.

Nerve impulses travel to and from the brain at speeds of up to 250 miles per hour.

In one square inch of our hand we have nine feet of blood vessels, 600 pain sensors, 9,000 nerve endings, 36 heat sensors and 75 pressure sensors.

There are 10,000 times more microbes in our intestines than human beings on the planet. Not only are we way outnumbered, these tiny creatures keep us alive, partly by donating genes and proteins that we rely on.

Our heart beats around 100,00 times every day or about 30 million times in a year.

Our body contains enough iron to make a spike strong enough to hold our weight.

The heart pumps about one million barrels of blood during an average lifetime; that’s enough to fill two oil super-tankers!

The DNA helix measures 80 billionths of an inch wide.

There are 137 million light sensitive cells in the eye’s retina and the fluid that fills the eye is changed 15 times a day.

When we blink one eye we move more than 200 muscles.

In 24 hours, the blood in the body travels a total of 12,000 miles; that’s four times the width of North America.

Surprisingly, not all the useful DNA in your chromosomes comes from your evolutionary ancestors – some of it was borrowed from elsewhere. Your DNA includes the genes from at least eight retroviruses. These are a kind of virus that makes use of the cell’s mechanisms for coding DNA to take over a cell. At some point in human history, these genes became incorporated into human DNA. These viral genes in DNA now perform important functions in human reproduction, yet they are entirely alien to our genetic ancestry.

The picture of the world we see is artificial. Our brains don’t produce an image the way a video camera works. Instead, the brain constructs a model of the world from the information provided by modules that measure light and shade, edges, curvature and so on. This makes it simple for the brain to paint out the blind spot, the area of your retina where the optic nerve joins, which has no sensors. It also compensates for the rapid jerky movements of our eyes called saccades, giving a false picture of steady vision. But the downside of this process is that it makes our eyes easy to fool. TV, films and optical illusions work by misleading the brain about what the eye is seeing.

If the human brain were a computer, it could perform 38 thousand-trillion operations per second. The world’s most powerful supercomputer, BlueGene, can manage only .002% of that.

The human brain has around 86 billion neurons, which can make 1,000 trillion synaptic connections.

A condition called synesthesia can cause senses to overlap. In other words, some people can taste words or hear colors.

The endocrine system is the human body’s network of glands that produce more than 100 hormones to maintain and regulate basic bodily functions. Hormones are chemical substances carried in the bloodstream to tissues and organs, stimulating them to perform some action. The glands of the endocrine system include the pituitary, pineal, thyroid, parathyroids, thymus, pancreas, adrenals, and ovaries or testes. The endocrine system oversees many critical life processes. These involve growth, reproduction, immunity (the body’s ability to resist disease), and homeostasis (the body’s ability to maintain a balance of internal functions).

Okay, that’s enough for this post. But you are welcome to continue an exploration of the actual body on your own. I’ll bet you’ll be so constantly amazed that you won’t ever even wonder if you are or are not the body. You’ll live in amazement, wonder and awe. You’ll see a thought speed by, carried by legions of silent non-thoughts. You will, I suggest, become both pairs of the lovers that were created by the genius who made it all up; lovers loving all without prejudice. Imagine having to come up with the body on a design table!