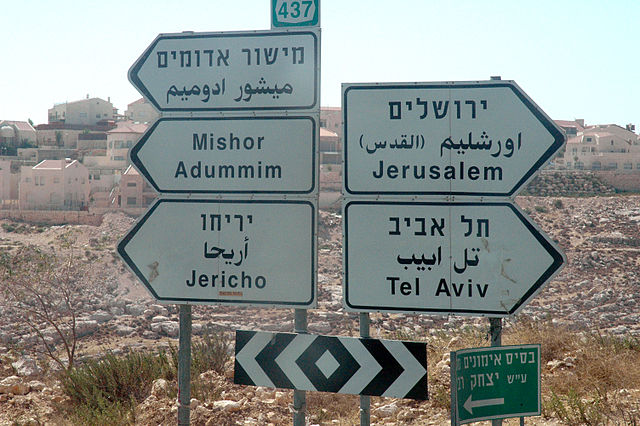 Looking out the window of a cafe in Kathmandu in the early nineties, I saw a small boy get smacked by a larger boy, who was immediately smacked by one still larger, who was in turn smacked by what was apparently their mom.

It all happened in the blink of an eye, and it was amazing to see the reprimand passed up the chain of command.

But usually the chain runs in the opposite direction, perhaps best summarized in a Roger Waters song:

People who have been abused want to get back at the perpetrators of their abuse but often lack the ability, so they transfer their aggression onto a more defenseless object, who in turn must do the same, on down the line.

There is a collective madness animating the struggle between Israelis and Palestinians, and much of it has to do with the way violence is transferred from one group to another.

Holocaust trauma is passed down through both familial pathologies and political indoctrination in Israel. And this leaves Israelis wanting to stand up to Hitler. But since he is long dead, they must find someone else upon whom they might transfer their loathing.

Thus, Hamas has come to be a sort of stand-in for the Third Reich. So, Israel does to Hamas what it really wants to do to a long dead madman who stalks their fantasies of revenge.

The Palestinians have, in turn, become the new Jews. They are a progressive, highly educated, stateless people, skilled at business, scattered across the world, and abused by a ruthless power.

And they are the victims par excellence, not only helpless but easily defensible. Yet, it is interesting how they are defended.

Supporters of Palestinians seem to often transfer their own sense of victimization onto the Palestinians. If you want to stand up to your own autocratic or corrupt government but lack the means, or you want to stand up to the childhood bully, you can now redeem yourself by standing up to Israel. Perhaps this is quite common in social justice causes.

But the suppression of political rights in the Arab world, coupled with the fact that Israel is one of but a handful of outright colonial powers left in the world, makes Israel an unusually good target upon which to unleash one’s suppressed desire for justice.

In doing this, we risk turning the Palestinians into pure victims, the Israelis into pure perpetrators, and ourselves into pure heroes. And this is dangerous, because while Palestinians are victims and the Israelis are perpetrators, this is overly simplistic. Through concretizing what are actually far more fluid roles, we excuse the abuses of the one side and fail to notice opportunities to transform the other. And we turn victims and perpetrators alike into caricatures of themselves. But since these caricatures serve a purpose for each respective group, the outside supporters who reinforce them often simply make Israelis into more thorough perpetrators and Palestinians into better victims.

The irony is that both groups simultaneously vie for victim status, while they are meanwhile treated by the other side as the ultimate perpetrator of crimes against humanity.

My own sense is that much of what Israelis attribute to Palestinians is pure projection. In other words, they imagine Palestinians doing what they themselves are doing but cannot face. The Israeli Defense Forces have been found on multiple occasions to literally grab Palestinians and shield themselves with their bodies.

Meanwhile, they constantly complain about Hamas using so-called human shields in a much more metaphorical fashion. And their evidence is weak, applies to a mere handful of cases, and was rejected by Human Rights Watch and the U.N. when Israel was making this claim in 2009. Meanwhile, they complain of Hamas killing civilians, while it is they who killed the vast majority and a vastly higher percentage of civilians in this last round of fighting.

Israelis see themselves as the true victims, but the victimization upon which they fixate has actually turned them into perpetrators. In finding a stand-in for the Nazis, Israelis have actually come themselves to take on this role.

This does not mean they are as bad as the Nazis. That would be an exaggeration. But they are playing the same role of perpetrator they learned from the Nazis.

This is tragic, and while we might condemn their actions, the role reversal is more a cause for sympathy, a sort of nightmarish turn of events that might happen to any victimized group.

To disarm the psycho-dynamics of the so-called conflict is to see it for what it is, and it is mainly the result of a formerly abused minority carrying out a military occupation in support of the colonization of the land of another much more rooted people. Were this to occur anywhere else in the world, the dynamics of the conflict might be much the same. But to whatever extent the conflict has been animated by the trance states elucidated here, breaking the trance will be key to ending the conflict.

And breaking the trance will require that the anxieties that fuel it be diminished.

Were the occupation to end, one might imagine this psycho-dynamic to simply vanish into thin air.

The hall of mirrors might come crashing down when the occupation ends, because even though the psychological complexes are real and may last for some time, they are sustained by the sense of threat that is a result of the occupation. The occupation is thus like a drug that sets the madness in motion.

Just end the occupation and with it much of the madness will dissipate.