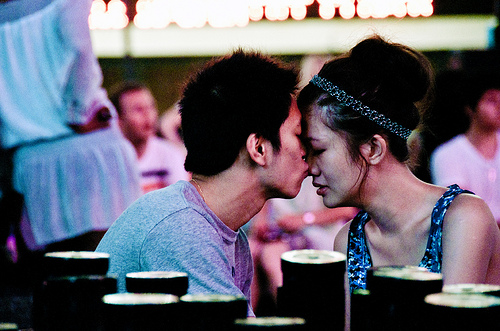 Everyone searches for love.

But it seems the best relationships start when you aren’t looking for one. Don’t fall in love with the idea of being in love. Fall in love—

Because he made your world a brighter place.

Because he put life back into your eyes after years of suffering from depression.

Because he is kind and genuine to every soul he encounters.

Because he is the most beautiful human being both inside and out.

Because you do not feel the need to hide anything from him.

Because he loves you for you and everything you have been through.

Because he accepts your raw self: sweaty, dorky, moody, random, obsessively-compulsive, stupid, busy, eating disordered, anxiety ridden and all your other strange characteristics.

Because he has not let your crazy, loud, energetic family scare him off. In fact, “there is nothing that can scare him away, dear.”

Because of his dedication to everything in his life. Working out, school, music, work, eating right, drawing, his family, friends, and so much more.

Love him because he takes care of himself. He doesn’t have a problem with eating salads, unlike most men. He pushes himself to run in the morning before school, even when he does not feel like doing it and he makes time to be in the weight room.

Because he is a hero by doing the small things. He is tremendously independent. He shows responsibility by paying his own bills and fending for himself. He will gladly go shag softballs for you while you practice your swing. He takes out the trash and visits his grandparents without being asked by his parents. He opens doors for others—not just for you—and has great manners, paying for dinner and insisting on driving.

Because he always seeks adventure wanting to entertain you by taking you to concerts, going to amusement and water parks, camping in his backyard, hiking through the White Pines and planning fancy dinner dates in Chicago.

Because he knows we can go out and have fun, or stay home, make a blanket fort, and watch movies. Either way, we wouldn’t want to be anywhere else, with anyone else, doing any other thing.

Love him because he is an old soul. He is not addicted to social media, and is rarely on his phone. He knows that spending time with people who are actually in his presence has far more importance that straining his eyes on his phone—keeping up to date on Facebook.

Because he takes care of others. He puts his needs last. Which is exactly what you do. And it is awesome that you are both caretakers. Because there will never be a moment that you do not feel cared for. He once had a campout at his house although he was sick with a sinus infection and a touch of the flu. He didn’t want to disappoint the 13 people that were looking forward to it. He was tossing and turning, sweating through the night in his sleep, but he was smiling when morning came. Because everyone else had fun, so his job was done.

Love him because he treats you like a princess unlike any other man before. He will pick you up in the midst of a kiss and carry you down the stairs when your knees are in pain.

Because he is organized and disciplined. He has a set day for getting groceries, preparing his meals, doing his laundry, dishes, and cleaning his room. Everything in his house has a specific place, just like how you have your room. He knows that school is important and he actually puts effort into his homework. And it makes life easier because you put tremendous amounts of effort into your education.

Love him because he has other priorities and understands that you two don’t always have to be together in order to be happy. It is perfectly okay to have a night away from each other to spend time with your friends. And you know that is a rare characteristic to find.

Because after 5,400 yard intense swim practices, he will have dinner made for you when you get to his house. Along with flowers in a mason jar, a fancy folded napkin, and a drawing of a stick figure that says, “You stole my heart.” And he will wash the dishes and put away the food, because he knows the fatigue that comes along after a hard workout.

Because he will tell you when there is something on your face, between your teeth, and in your nose so that you don’t get embarrassed when you find it yourself.

Because he has changed the way you look at the world. You are no longer just living the days, you are adding life to them. Because he makes you a better person. You are simply happier, and small things don’t bother you anymore because his ‘long hair, don’t care’ vibe has rubbed off on you for the better. You no longer get antsy when sitting in car traffic because he gently reminds you that “you aren’t stuck in traffic. You are traffic.”

Because he has already been through more than you could imagine and you want to help him get past the rest of the struggles to come. Because there is still so much you don’t know about him, and for once, that is okay, because it gives time for later conversation. Because you can be open and honest with him about your feelings and thoughts and not have to worry about judgment or condescending comments. Because he helps you live in the moment, not worry about the future that things will work out the way they are supposed to.

Because he has worked hard to get where he is today and you respect his journey, loving him for his past, present, and future.

Because he doesn’t make you feel tied down. Because his love has actually set you free.

The man I have stumbled upon has showed me what love really is. There is nothing I would change about him and I love him for who he is.

Yes, it’s a little weird to think about a future with him so early in our relationship. But having a relationship isn’t about being locked in on your future. It’s about living your lives together day by day and letting the rest fall in place. And so far, it is working out splendidly. 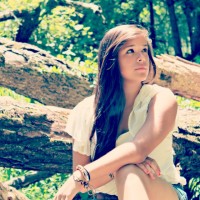