How I Got My Highest High Out of Thin Air. ~ David Flores 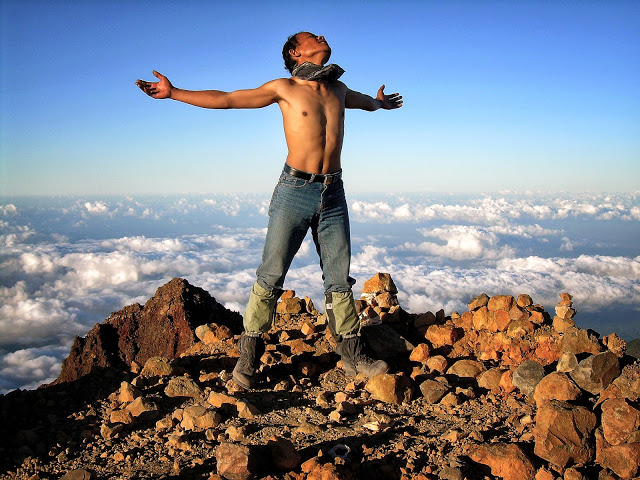 Yoga has an amazing potential to bring our bodies, minds and spirit into balance.

It also has the potential to become something more than going to a studio or gym to stretch and work out. The meditation aspect of yoga is like a set of doorways which lead to rooms of greater awareness, peace and for those really devoted seekers of truth and of God, It can lead to profound spiritual awakening, liberation and ultimately, enlightenment.

Most spiritual books and gurus make a remark of the important role that breathing plays in the road to enlightenment.

It is said that a true master of breath, can go trough a whole 24 hour day with just 108 Inhale-exhale cycles.

Whereas for us average people, it goes in and out 21,600 times in a day. It’s a staggering difference, but it’s just a number abstraction, and it’s more of a symbol than a challenge or a set rule.

When I was browsing potential places to do my teacher training, I chose one in particular because it emphasized in the regular practice of meditation, which was often guided; I had tried meditation before and I didn’t really know if I was doing it right, and wasn’t sure of how and what I should be feeling.

After a couple of weeks into the training and several hours of meditation, we were told to prepare for a one day fasting—vision—questing, solitary meditation out in nature. Nothing but essentials like water, a sunshade and a sleeping bag could be taken.

So after some mystical native drum and flute music session, we walked off at night. I chose to sleep by the cliffs, where the sound of the crashing waves was amplified and the air was charged with ions and ocean breeze.

As I moved on trough my fast, I noticed strange sensations in my body start to arise. The Baja heat was intense, so I had to relieve my discomfort with some all natural (that means naked) swimming in the ocean.

As I felt the energy of the waves pass over and trough me I noticed my connection with nature deepening even more. Pure experience, pure alone time.

We each had a spiritual buddy, a person that we entrusted with our feelings and intimate moments trough the training, such as holding space for each other during the rebirth meditation. It was strange to witness the whole thing at first, but I was eager to lie down and surrender to the upcoming transformation.

As I started breathing with my mouth open, I realized how badly dehydrated I was, my throat and mouth went dry, but soon enough something else started to happen. The kundalini energy tingled within my body right away, and It wasn’t too long before I felt my hands clump up and my awareness distort into what felt like a vibrational limbo that shook up my entire being and made me aware of the energetic presences of my teacher, my spiritual buddy and apparently someone else that was not physically in the room.

I went into my deepest shavasana ever, and was woken up by a lady laughing uncontrollably. I looked closer and noticed she and everyone and everything was glowing. In an instant, a bunch of us were laughing our a**es off. I never felt so happy in my life!! I felt like I had smoked a hundred medical grade marijuana joints for the first time. I felt like I had smoked God in a joint.

I was so f*cking high!

It was the first time I ever experienced authentic bliss. It was such a heart-opening and liberating experience. When I headed back to give thanks to my teacher, we hugged and instantly our open hearts formed an amazingly powerful bond, which felt like being with my mom as a newborn baby.

Naturally I started to cry, which soon turned into uncontrollable sobbing. I never felt so loved, safe and free at the same time. I realized I was letting go of so much pain, sorrow and resentment I had failed to cry out throughout my existence. I was born again and had a lingering feeling of peace and calmness throughout the day.

I had read books by the psychedelic-spiritual prophets like Allan Watts, Terrance McKenna and Ram Dass, and I never imagined what bliss actually felt like. Natural bliss. Without the aid of a plant or a chemical compound. Yet my body and soul still yearn to experience different states of consciousness, preferably in nature and being guided by experienced shamans and teachers.

“Psychedelic experience is only a glimpse of genuine mystical insight, but a glimpse which can be matured and deepened by the various ways of meditation in which drugs are no longer necessary or useful. If you get the message, hang up the phone. For psychedelic drugs are simply instruments, like microscopes, telescopes, and telephones. The biologist does not sit with eye permanently glued to the microscope, he goes away and works on what he has seen…”

What is the goal with this psychedelic quest?

It’s not just to get high, it is to become high, to be high with God-consciousness or whatever you want to call it.

The aim is to dissolve the boundaries we have been conditioned to impose between us and other beings. That false sense of separation. These experiences have the power to dissolve the ego little by little and allow us to discover the ability to love unconditionally, to merge with nature and to find God within ourselves.

It is well known that we have our weaknesses and we can become addicted to yoga, to kundalini meditations, to drugs, to people and experiences. But I deeply believe that with a strong philosophical foundation like yoga’s teachings, it is possible for the average yogi to find balance between highs and lows, to let go of our pain and heal our wounds, maybe even clear some karma and step closer to enlightenment.