On Robin Williams & Beyoncé: What It Means to Be Human. ~ Leah Pellegrini

Before August, I had never heard of “Mork and Mindy.” I have never watched “The Fisher King,” and I have only caught mere glimpses of “Mrs. Doubtfire” when I have accidentally stumbled past it playing on television.

“Dead Poets Society,” however, is one of my all-time favorite movies. My high school boyfriend’s favorite was “Good Will Hunting.” In my personal opinion, Genie is the best thing about “Aladdin,” which is otherwise low on my list of preferred Disney cartoons. I still remember seeing “Flubber” in theaters with my family—the green goo grossed out my parents but made me laugh.

When I first heard of Robin Williams’ death (via an Instagram post by Lena Dunham), I felt a surge of sadness that the majority of my online social network seemed to share. Whether true fans or minor admirers, we all loved Robin. You couldn’t not.

Between his loss and the ALS Ice Bucket Challenge, my Facebook feed was more emotional than usual last month, inundated with confessional video selfies, roughly-typed eulogies, irritated rants and nostalgic photo collages. The unrestricted gush of feeling was mesmerizing, but strange.

True emotions are personal, sticky, private, indefinable things.,..and I’m not sure I want to share mine with thousands of virtual connections: some family, some friends and some acquaintances, and others nearly strangers.

Each day, 150,000 people die. I found this statistic by Google search when I finally managed to rip my eyes away from my Facebook homepage. That’s 7,000 Americans every 24 hours. Of these 7,000, about 88 are suicides.

Usually, the fatalities are strangers, and we don’t think about them. We would rather not. But while dismissing the deaths of countless people on a daily basis, we find so much communal sadness in the loss of celebrities.

To be fair, they’re not the only ones acting. We, too, perform roles to represent ourselves to the world. As social media become increasingly mobile, evasive, and omnipresent, it becomes ever more difficult to distinguish our internal personalities from our external beings—the self-portraits we perform through online profiles, Instagram captions and the tone of our Tweets.

Of course, some distinctions are clearer than others. When we sort through tens of photos before selecting our Facebook profile pictures, we recognize that we’re choosing the ones that portray us most attractively. But other times, the lines are blurrier than we’d like to admit. Does that Instagram snapshot of your friends smiling at graduation really sum up your emotions that day?

Would you have donated $100 to ALS research if you had to keep the good deed an unpublicized secret?

Robin’s death makes you sad—but what does that sadness really feel like, deep down in your gut and at the tips of your fingers and behind your eyes?

None of us want to confess that we’re playing characters, or that we don’t even always know what’s a role versus what’s real. We don’t want to acknowledge how truly messy and mixed-up we feel on the inside, though we’ve become experts at reflexively painting our external personalities in smooth, shiny colors.

We also worship celebrities who have mastered the art of role-playing. The example that peeves me the most is Beyoncé, whom we’re always labeling a “queen” or “goddess.” I’m not saying I don’t admire her like the rest of you, because I do. I’m not saying she’s not talented, beautiful, smart and all-around remarkable.

I’m merely noting that Beyoncé, while extraordinary, is ultimately a human being. She brushes her teeth in the morning, and sometimes she drips a little toothpaste on her black shirt and has to change. She gets hangnails. She has at least one irrational fear—bumblebees, maybe, or expired milk, or subway grates. She keeps Ibuprofen and Imodium in a medicine cabinet somewhere.

Occasionally, she wonders if she has said the right thing or if there’s snot hanging from her nose. She vomits. She experiences shame, anger, envy and insecurity.

Robin, too, was a human. He was a warm, gentle, funny, generous and talented actor; but he was also more intricately complicated than his public figure could ever have comprised. His emotions were more dense and detailed than we, as strangers, could understand. They belonged to him alone.

This is terrifying to recognize, because none of us wants to be alone. We don’t want to be fragile. We don’t want to know that we are often powerless to save each other from ourselves. Millions of us loved Robin, but that didn’t matter to Robin—our love was not sufficient to sustain his life. He was his own solitary person, with his own thoughts and emotions, and his cheerful public portrayal was not a representation of his whole being.

Are we mourning human frailty in general?

Or perhaps we’re simply searching for solidarity. We may all be alone, and we may all be acting—but at least we’re able to do so in the company of one another, virtual or otherwise. There is nothing more human than that. 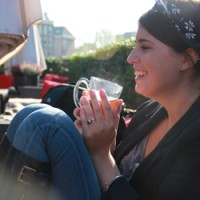