The Girl with the Rose Colored Glasses. ~ Sara Witzler 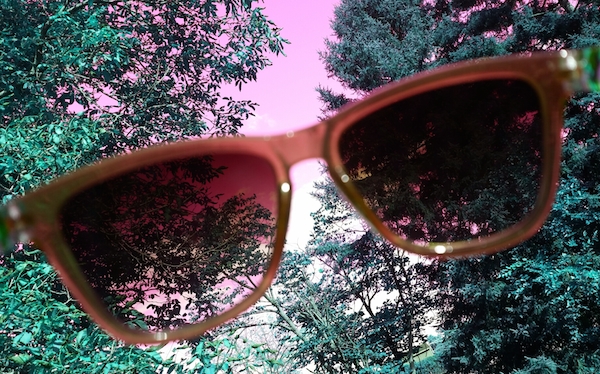 John Conlee said it best, ”These rose colored glasses, that I’m looking through, show the only the beauty, cause they hide all the truth.”

I began to realize I had a permanent set of rose colored contacts affixed to my corneas in a hindsight-is-20/20 sort of way.

Don’t get me wrong, I have always been known to see the best in people—to a fault. I didn’t really understand the depth of this until I was in the 30s club, in a wildly inept marriage, functioning as a mother of two realizing motherhood might not be all it was cracked up to be.

Let’s just say the unraveling of adult life as I had known it up until that point helped me hit the wall. I realized I might not always see situations for what they are. The cold, harsh reality of navigating life as a newly divorced single mom put me way more in touch with the truth Mr. Conlee was singing about.

Truths how even when two people love each other they still may not be capable of creating a healthy, balanced love together. And that sometimes when people really love us and don’t know how to show it, or more specifically, can’t fully accept the love we have to give them, they hurt us instead. Most importantly: even when we understand all of this truth and know separation is best, it doesn’t take away the sting of any of it.

I became an older and wiser woman who must have at least toned those contacts down to a shade of almost sheer pink lemonade. Right? Well, not as much as I would have liked.

Cue the dark brooding mess of a man with which connection was instant and karmic. A little rough around the edges—that’s all. Just hasn’t had anyone who truly sees the beautiful person he is inside. Someone who can see the beauty in me underneath all the pain and fear.

Unfortunately, I must have had the shading switch on the wrong setting because this turned out to be a bigger mess than the first. Not one but two rounds with this one left me sobbing in a ball on the floor wondering what the hell was wrong with me. Maybe just lay off the dating, huh? Of course not. ‘Cause a stubborn Aries has to learn things for themselves. And if it takes 10 times on the same lesson so be it.

Trouble was it wasn’t just with men that I had the rare talent for rosy vision. It was everywhere. Those crappy little houses for rent in the wrong town were new adventures and hope all wrapped up in a bow. A simple walk in the woods was enough to take my breathe away. That incessantly bossy and nit picky person was just trying to be helpful and coming from the right place in their heart. That co-worker that talks behind our back and tries to get us fired was reacting from old wounds in their past that had nothing to do with us.

It was always seeing where someones behavior was coming from, which was almost always an old hurt, and missing what that behavior was negatively doing to me. Always seeing the potential of a person place or thing, and not reality.

It was more than finding some beauty and value to that bouquet of dandelions, it was being mesmerized and intoxicated by them. Constantly being pulled to the edge of the cliff by the beauty of the world and then tripping and being crushed on the rocks below.

I had yet to develop the awareness to know that’s how I see the world, to take a breath and give myself time to let the rosy vision wear off before getting my heart involved. Being in love with the world and constantly feeling betrayed by it is not a healthy or sustainable relationship.

I will never forget the first time I was able to take off my rose colored glasses, or more appropriately stand outside of myself to see them in motion.

This situation started differently, slowly and with a full view of who this person was. All the pieces were there. I could see our lives intertwined and meshing. Chemistry, laughter, magic. But something was still missing.

That night I was sitting on his couch listening to him talk about all that was going on in his life. The past that had brought him here, what was weighing on him now, and his fears for the future. As he spoke, I took a picture walk across his wall. Each photograph a piece of him, his family, the color and life in both seeped off of the canvas. I could feel my heart opening to him a little deeper with each one. The beauty of all of it made my insides ache. And that’s when it happened.

Suddenly I was sitting there watching myself standing on the edge of the cliff. He looked at me wide eyed, “I just don’t want any more collateral damage.” I smiled, my heart softened and retreated into itself as I sighed. Being on the edge and pulling myself back was just as painful as walking blindly into thin air.

We came together, and then I cried. Sad that I knew it wasn’t something that could be, deeply appreciative for the beauty that he was, and scared because I knew things were changing for me.

My rose colored glasses are a gift, in a way it’s my job to see all the beauty there is to offer in the world.

Now the stakes were higher. From that moment on I knew I would be still lured in by hope and possibility, but that my glasses were really to find and help others see the rare exquisite beauty in the truth.

Mr. Conlee’s lyrics make a perfect Country and Western ballad, but I find more of my truth with my man Oscar.

“It takes a great deal of courage to see the world in all it’s tainted glory, and still love it.”

The girl with the rose colored glasses of courage.