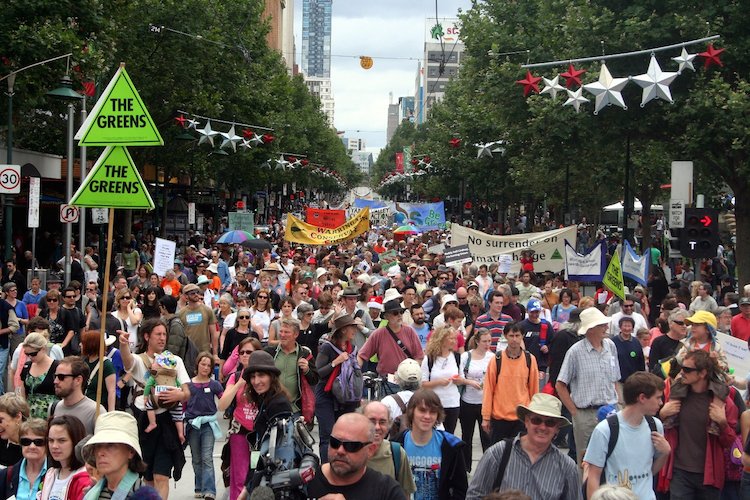 It was the largest climate march in history. And at stake was the future of hundreds of coastal cities, food security for billions, the destruction of the rainforests, and millions of species that might go extinct.

My brother and sister-in-law were at the demonstration with my two nieces.

Perhaps it was a sign of the times that this solidly middle class family was out demonstrating while the activist brother remained at home. It suggests a new phase of maturity for the climate movement. And while it is exciting to see them out demonstrating, it is hard to imagine how the girls might envision their own futures.

It is not easy for the young to imagine what the world might be like when they are older. Projecting yourself into the future involves making hundreds of calculations about population increases, resource depletions, growing economies, and rates of innovation, amongst other things. Then you must fit the incomprehensible trajectory of your own life into the moving target of the world. No wonder so many futurists get the future so wrong.

Certainly we got it wrong back in my college days. It was the early 90s, and I had somehow managed to get onto a committee of students advising the State of Georgia’s Board of Regents, where I wrote a proposal for a core course in Environmental Studies. The proposal had overwhelming student support and was miraculously implemented by the Regents. So, every college in the state got a core course in Environmental Studies, which might ultimately have reached hundreds of thousands of students.

But my most productive college activist friend at the time brushed off the victory, arguing that we had no time for education: by the turn of the century, it would be too late. Such apocalyptic thinking was typical of Gen-X. But as the century, and then 2012, passed uneventfully, the difficulties in making future projections became ever more apparent.

My 15-year old niece, Brooke Horesh, who just attended the climate march, is fortunately more sensible. She spoke of how inspiring it felt to be part of a community of people who are concerned for the future and how heart warming it was to see all of the families together. “There was a sense that people wanted to get something done.”

The environmental movement has matured, and this maturation is not simply a function of its leaders getting older. Young environmentalists are entering a movement that is hard at work transforming economies the world over. Climate activists are reinventing energy. They are challenging us to think not just globally but into the distant future. And the youngest members of the movement are bringing to it a spirit of practicality and pro-active innovation.

But the capacity of young people to envision the distant future is limited by the brain’s development, which is not complete until early adulthood. And yet, as Brooke pointed out, young people’s minds are often more flexible and creative. They also have a greater stake in the future. So, while the sands in my own hourglass are likely to run out sometime around 2060, my nieces may be alive in 2090.

Brooke noted that “it is important that young people be able to speak on this issue, because they will be living with the changes.” Thus, they will bring to policy debates a different and vitally important set of concerns. And they may have an easier time perceiving the ill-fit between old mental models and new realities.

Perhaps we can grasp the enormity of the changes they are likely to experience in their lifetimes by thinking through the transformation in values that has occurred in the life of any 70-year old alive today. Killing millions of enemy civilians was normal for all sides in the Second World War, but now a regime risks international isolation for killing thousands.

Meanwhile, tremendous movements have arisen for animal rights, gay rights, indigenous rights, and the rights of the unborn, which would have been unthinkable in 1944. This is not to say the world is a better place now, whatever that might mean. But the scope of ethical commitment has in many places expanded and this is important.

And yet, this means the lives of people born in the distant future are just as important as those who are alive today. While we might not be as capable of imagining what their lives will be like, and how we might tend to their needs, there are a few issues like climate change, where our actions today will make an appreciable difference to their lives tomorrow.

And it is through the eyes of the youngest generation that we might catch a glimpse of these future lives. So, in caring for the youngest living generation we are also caring for those more distant generations, whose lives would otherwise confront us only in the abstract. All of this requires some expansion of the mind, but it is a beautiful expansion that widens not only the community of moral concern but our own hearts as well.

But bringing such young minds into the great policy debates of today requires that we educate them for participation and that we listen to their concerns. It is yet another task for an ever-growing and tireless climate movement to which we owe great thanks.