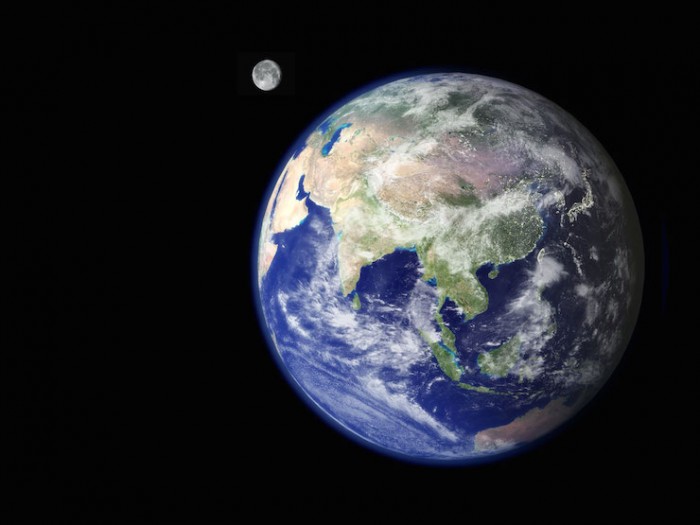 Editors Note: This is an excerpt from Theo’s forthcoming book, Convergence: The Globalization of Mind.

From 10,000 miles out, the Earth appears a luminous, blue-green orb, swathed in swirling white clouds—a solitary sphere, hanging in darkness.

It hovers—still, stark and desolate upon a background of radiant blackness. Grinding along its invisible arc, revolving through the eons on an unseen axis, its solitude is one of stillness—and  yet it moves.

Upon closer approach, the Earth looms and magnetizes, an overwhelming force of churning mists and sublime azure. At least one contemporary science writer has suggested there is music to this sphere, inaudible to the human ear, too low for our apprehension. Yet, we sense it pulsing and throbbing like the Rite of Spring or Beethoven’s Fifth, beckoning from afar, drawing us in. Dabbled in a palette of verdant green, mocha, sea-blue, and ice, the earth comes alive too our senses.

Perhaps the most interesting element of this sketch is that we can conceive of it at all. How is it that someone who has never been to the moon can write poetic prose of the experience? And how is it I can trust that many will find such a depiction of the Earth moving?

To a Homer, writing in the eighth century before Christ, the world was an enchanted sea of Gods and Goddesses, mysteries and monstrosities.To the ancient Hebrews, it was a hollow terrain of adversaries whose extinction might be commanded by a jealous God and then glorified in scripture. If for the Greek Hesiod, a Goddess named Gaia personified the Earth, this was not the Earth we now inhabit. In fact, the world in which we now live is far more fertile and teeming with mysterious organisms.

The information age bestowed a great gift to humanity for which we seldom express our gratitude—the ability of ordinary people to comprehend the world as an integrated and  meaningful whole. Global consciousness is a relatively recent phenomenon in the history of the world.

The capacity to survey the planet, in all its living color and vivid detail, would have been impossible for any but the most visionary geniuses of ages past. Blocking their path would have been vast gaps in knowledge, of the peoples and places of the planet, gaps that could only be filled through immense leaps of the imagination, metaphysical speculations, painstaking research, or the formal extensions of logic.

Such substitutes for genuine knowledge often signified great leaps in the evolution of human consciousness. Yet, they tended to be intimately woven into the prejudices and distortions that characterized so much past understanding of the world as well. Hence, the finest philosophy up to modern times bubbles over with the impossible speculations of Plato’s Republic, Rousseau’s State of Nature, or Hegel’s Philosophy of History. The lives and cultures of distant lands were plastered over with the whitewash of the imagination. And so the “Chinamen,” “Hindoos,” “Musselmen,” and “savages ”that first surfaced from out of the darkness of the Western unconscious, appeared more as exotic apparitions than real people. Their needs and aspirations were as unknown as they were unstudied.

Now after several decades of exponentially mounting information and studies, we are beginning to inhabit one known world. The Internet, cell phones, and affordable air travel have made contact across that world ever-simpler, of course. But an increase in the number and size of global institutions has also made such contacts a necessity. Global institutions everywhere are growing in prominence: NGO’s, multinationals, alliances, and associations. With their growth, as well as a rise in aid, trade, and migration, more and more people are becoming functional citizens of the world, able to work and flourish in strange and distant lands.

So also, as the number of educated people across the world rises, more individuals know more about more of the planet. An increasing number of journals, websites, television networks, and citizen groups challenge us to think globally. Thus, conversations about the state of the world are becoming more informed and relevant. An increase of planetary threats like global warming, nuclear proliferation, pandemic disease, and terrorism have also challenged concerned citizens and politicians alike to think globally or to become irrelevant. And as the social sciences and international institutions keep cranking out increasingly accurate studies of the peoples and places of the planet, it is becoming easier to conceive of what life is like on the other side of it.

Global consciousness did not simply arise from seeing the world from outer space or from some mass of the population attaining certain spiritual states. It has taken a long process of social evolution, which has been supported by a wide array of institutional and technological developments, to produce global consciousness. Like the nationalism of the 20th century, it is a consciousness suited to a new form of human organization. We are globally conscious because global consciousness is needed to comprehend the world in which we reside. Without it we would be lost in spaciousness.