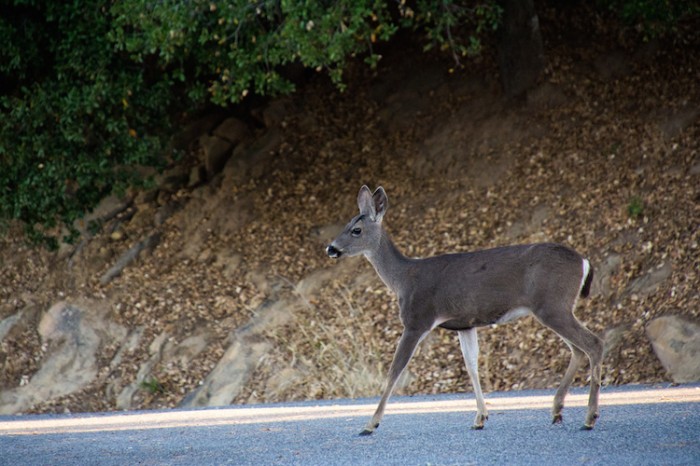 My chest tightens, I clench my hands on whatever is immediate and readily available and breathing stops being voluntary. Sometimes my energy drastically shifts. I feel so deeply. My chest heaves and my stomach sinks and my mind starts to creep and crawl to somewhere far away.

This is nothing new; I have, for as long as I can remember, felt compassion and longing toward creatures that have become casualties of the human condition. Very few things disturb me more than the passive way in which most people view dead animals on the side of the road, other than the alarming reality that many people don’t notice them at all.

I notice everything, and I notice the sensations that overwhelm me as these triggers increase in intensity. Since I’ve left New York, where the extent of my roadkill experience was a smashed rat on the subway tracks and moved back to Ohio, I feel like roadkill has been a prominent source of tension and contemplation in my life.

As insignificant as it may seem in the grand paradox of this entire universe, this is my reality. Partially because of the trajectory that head starts to tumble along when I experience anxiety, partially because the generally desensitized nature of our current society is downright fucking alarming to me, and partially because I feel intimately connected to life in its natural state. And death caused by our species is mostly so distant from organic.

My adjustment to a quieter, softer, and simpler life could also be some relevant factor, but I mostly think that they are all combined. Intertwined. Or maybe just the same.

Lately, my drives have been full of encounters with carcasses. New York was a graveyard for lost love and this place is more or less just a graveyard. Yet for me death isn’t the overwhelming part. It’s fear. It’s the absence of fear and the abundance of fear. Fear in all its forms.

As I drove to work the other day I spotted a fawn partially on the road, partially off. Limbs spread out. Head tiled back. Belly exposed. And I was so disturbed by something about that corpse. Disturbed even further by the 10 or so additional corpses that followed. Disturbed so much that I felt tempted for a moment to explore the deep void of being devoid of any emotions. Almost as if they were passing me by and I was just the shell of decaying matter left to be shoved and pushed and flattened into impermeable ground.

But for whatever reason I neglected the attraction, the allure of numbness and I replaced it with curiosity. A legitimate series of interrogations as to why this space that I am occupying operates in such a way.

Why does this happen and why am I so concerned? What actually is the root of my concern and why do the visceral responses that take place in my body feel familiar? Why have I been here before and how do I know with such clarity that I will be here again and is this really just about the fact that I just drove past some semblance of something that used to live and breathe and now is something completely unrecognizable other than the tuft of fur that perhaps appears to be a tail of some kind?

Animals can usually hear and smell and sometimes see better than we can and they sense things, too They have that instinct that so many of us have lost. So why the hell do they walk into oncoming traffic? Why are they so, unafraid?

And there it was. I thought to myself. It really has to be related in some capacity to how us humans wander this earth completely f*cking terrified of each other. And animals, well they fear us too and I wonder if it’s because they can sense the degree to which we are afraid.

You can start a car and a stray cat won’t move, but a human takes a step toward it and the cat runs away as fast as it can in the opposite direction without looking back?

Not always the case, but I feel like this is important.

I consider fear to be what has kept our species animate in the way that it has. That and the ability to adapt extraordinarily quickly, but psychologically speaking we are conditioned to be scared of things in order to survive. And when we have close calls, when we experience things that really make us consider the value of safety we stay reassured that we should live in some realm of consistent fear in order to stay alive.

And while this has contributed to how we have become whatever we are on this planet, I also think about how our fear permeates all aspects of our life. At some point, the animal in each of us began to transform the way we sense fear. Our very senses themselves have been diminished and instead, our logic has become a real tool for us to remain attached to this concept. The systems in our bodies have been trained to keep us alive.

Rather than being afraid of predators, we have become afraid of everything. Our consciousness has given us concepts of time and our brain has developed in a way that enables us to retain memories. And as we have evolved, we’ve used this to perpetuate fear too. We fear fear itself, we fear what no longer exists. Things in the past keep us locked in terror. We fear what hasn’t come. We fear what does not yet exist. We fear anything that could potentially happen. We create scenarios based on our memories and we are convinced that this will help us survive.

Well who knows what is reality and if truth even exists, but I think about how very real it feels sometimes to be emotionally damaged. How our body holds deep wounds that can’t be seen from the outside. That sh*t translates into the physical nonetheless. Sometimes the internal pain we feel often does make us think that death and dying couldn’t be much worse. Sometimes it’s unimaginable to think that worse things exist. We feel pain in a profound way. And whatever kind of animal we have become wants to avoid that, so we stay fearful.

I think about how fear keeps us alive and how it also keeps us mostly unhappy. It causes us to be in a constant state of fight or flight. We rarely have time to rest.

So what’s the f*cking point? Do we stay afraid or be killed? Or is there something else that we are missing entirely? Can we consider what life could be like if we acknowledged our fears and actually welcome them home and embraced them and held their face in our hands, and saw them for what they really were?

Can we begin to understand that because of our nature, we are fortunate, that we are lucky to experience emotional trauma. To some degree this is a magical part of our existence. And can we understand gently and with patience that living isolated, hoping to prevent ourselves from any potential harm that might come our way is barely living at all?

We can approach an understanding that fear doesn’t actually do much to protect us, our loved ones, our children, the future of our species. We can begin to unravel all the bullsh*t that has taught us that pain is a human’s natural predator. We can rediscover the creatures that we were all designed to be. We can reclaim our nature whenever we please.