The only Way to Know if You’re Allergic to Gluten.

*Editor’s Note: This website is not designed to, and should not be construed to, provide medical advice, professional diagnosis, opinion or treatment to you or any other individual, and is not intended as a substitute for medical or professional care and treatment.

Recently my friends wanted to make me, a gluten-free girl, lunch.

After I told them what I could and couldn’t eat, they were flustered asked, “so what is a gluten anyway?”

Here is the who, what and why of gluten free. I am not a doctor, scientist, clinical dietician or self-proclaimed nutritionist—this is simply an account of my personal self-study and research over the past three years.

The word itself is a Latin derivative of the word glue. Gluten is the is the protein found in many grains, especially wheat. It allows binding while baking and gives an elastic quality to breads, pastries and pasta.

Basically it is the thing that makes a croissant wonderful. (Yes, I have tried every alternative thing out there and gluten-free croissants are the only breads that just don’t compare to the real thing.)

It makes soy sauce a little sweet and delicious. It makes most creamy soups and salad dressings, well, creamy.

In American society, people go “gluten free” for the following reasons (in no particular order):

This list is hardly comprehensive, but gives you an idea why it is hard to pin down exactly who is “gluten free.”

The research is still becoming clear about exactly what part of the gluten causes gastronomic distress, and there are a number of issues around proper diagnosis of celiac or non-celiac sensitivity.

The range of symptoms are incredibly broad and I haven’t found conclusive definitions of the range of issues. Diagnosis of celiac is arduous, involving DNA testing, at least eight weeks of gluten challenge diet and an endoscopy taking at least six samples. If you test positive for the gene, it may not be activated (not causing intestinal damage), but could be triggered.

According to CeliacCentral.org: Gluten sensitivity [which seems synonymous with the phrase non-celiac gluten sensitivity], occurs in six percent of the population, or 18 million Americans. The gluten-free diet is the only treatment for this condition, as well, whose symptoms are identical to celiac yet is less clinically severe.” With the popularity of gluten free rising, for those diagnosed & undiagnosed, it has become a $4.2 billion dollar industry.

Three years ago, I became overwhelmingly frustrated when a necessary nap would turn into a three hour affair on a weekly basis—I would be unable to keep my eyes open, limbs would become leaden. I would wake up groggy, stressed and disappointed with myself as I would know have to work double time the next day to make up for the work I had missed.

After most big dinners, I would literally pass out—on a couch, in a car (not driving) or hopefully my bed. My family deemed me “very relaxed,” and probably a little lazy.

I decided to avoid eating wheat and sugar for two weeks; I figured a little“detox” would help clear my system. I went grocery shopping and stocked up on gluten free pancake mix, bread and crackers. After a few days, sugar was back in so I could better commit to letting go of wheat.

Two weeks became six, after the initial withdrawl symptoms subsided. I have never had such difficulty avoiding a food before, fifteen years as a vegetarian were mellow in comparison. I was cranky, irritable, had trouble falling asleep and experiencing general malaise. But I was suddenly able to help clear the table, hold conversation while enjoying a glass of wine after dinner and then watch a movie without passing out.

It was a whole new world.

Slowly, I started piecing together my personal history with food and realized I had always paired gluten with caffeine or strategically schedule its consumption: a croissant with coffee; a piece of pizza with a coca-cola; a sandwich with iced tea. Pancakes were a special treat reserved only for late night enjoyment at a diner after a night of dancing.

The more I research, the more I information I have found that a gluten allergy can express itself as respiratory affliction.

I suffered from exercise induced asthma and had annual sinus infections growing up. I do not have a formal diagnosis—I know that a tablespoon of soy sauce will cause digestive distress and shut down for 12 hours with a week of reverberations. 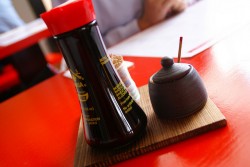 I wish I had listened to my sister, a clinical dietician, who recommended I get tested for celiac before I “tried” out this diet. It was a rabbit hole I didn’t realize I was going down because now don’t want to deal with weeks of brain fog, cramping and gastrointestinal discomfort.

My recommendation, if you think you are considering going “gluten free.” Enjoy croissants on my behalf to your heart’s content while you set up your appointments to get tested. And guess what, if you are diagnosed? Get a note from your doctor because it is tax-deductible.

What am I cooking up next? Hosting your gluten free guest aka “how to not poison your house guests” complete with approved ingredients. 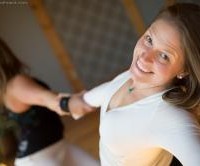