The Truth about Ebola. ~ Portia Duke 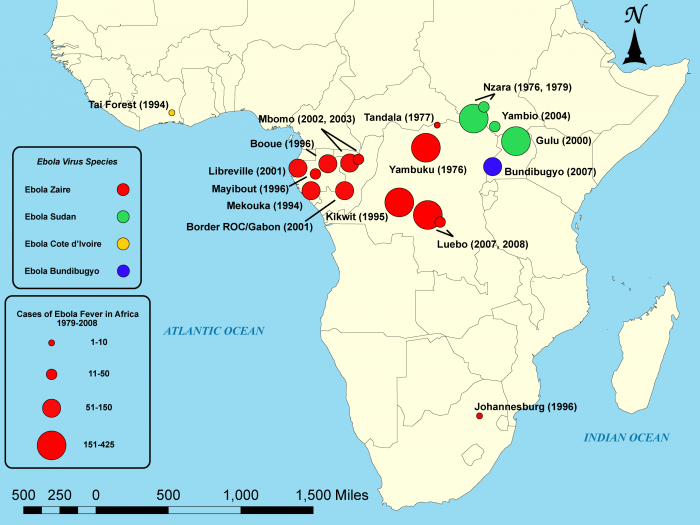 A history of Ebloa outbreaks in Africa.

The Ebola outbreak of 2014 began in early March in the West African country Guinea.

However, Ebola did not start taking over headlines until early August when two U.S. missionaries were transported from West Africa to Atlanta for treatment, and when on August 8th, the World Health Organization declared Ebola an “international public emergency.”

Ebola has been causing widespread global panic ever since.

This year I spent nearly five months, from April to August, in Africa doing non-profit work. In my time there the Ebola outbreak grew from a small local outbreak to an international epidemic.

This being said, it is no wonder that the Ebola outbreak has a dear place in my heart. It is a terrible tragedy, and according to the CDC, as of September 29th, approximately 3,091 lives had been claimed by this awful virus.

I am now back in America in my hometown of Fort Worth, Texas, a mere 30 miles from the first confirmed case of the Ebola virus in America.

Recently the CDC confirmed the first case of the Ebola virus to ever be diagnosed in the United States of America—and people went wild. The whole city seems to be in a complete panic about the dangers of Ebola. “Where can I find a gas mask?” “Will schools be canceled?” “What if a mosquito bit that person in the last four days and is on the loose now?”

When I was in Africa this year I spent my time in Kenya (East Coast), roughly 3,000 miles away from the heart of the Ebola outbreak. The people of Kenya handled the news of the outbreak with grace. There was no major panic noticeable in the day-to-day lives of the people there. People listened to the news, they implemented extra precautions where necessary, but that was about it.

It wasn’t until I got back to America that the frenzy really began. The American people seemed so much less informed on the dangers of the outbreak, despite having a significantly more access to information.

So many people asked me if I was concerned that I might have the virus. Since the confirmed case in Dallas the questions have begun again and have been non-stop. I was on the complete opposite side of a huge continent in a country that still has been left completely untouched by Ebola thus far, but no one could do me the courtesy of even looking at a map before asking me if I had been tested.

People absolutely must start doing their own research before giving in to hysteria over this (or, for that matter, any other) event. We are an advanced society with so much knowledge at our disposal, and instead people are allowing any misinformed comment on Twitter, or a rumor they hear while standing in the queue at Starbucks to dictate their beliefs.

The Ebola outbreak is a horrible catastrophe, but the least helpful thing people can do is continue to breed myths, fear, and ill-informed panic. Knowledge is key in fighting this disease, both at home and at the source.

I am no doctor, but a basic Google search has provided me with enough information to feel safe and secure whether I am in Nairobi, Kenya or Dallas. I highly encourage everyone to do their own research, but to start you out here is the top five things that I wish everyone knew about Ebola before they resort to terror:

1. Ebola is not airborne.

The Ebola virus is not airborne. Plain and simple. This is a fact that the CDC has been trying to promote since the beginning of the outbreak, but people are not listening. Almost any news report you listen to will include this fact. I did a quick scan around my work place yesterday and asked a handful of people who believed that Ebola was airborne and almost every person said yes. This is a myth; let’s all do our best to stop it in its tracks.

2. Transmission is Spread Through Bodily Fluids.

Ebola is spread through bodily fluids including blood, saliva, urine, vomit, feces or semen after a patient has already become symptomatic. Ebola is not spread via water, food or air. Diligent hand washing and basic hygiene are key in keeping yourself healthy.

3. The Medical Infrastructure in West Africa and Dallas are Very Different.

The outbreak of the Ebola virus has been perpetuated throughout West Africa due, in large part, to the lack of medical infrastructure. The hospitals are often understaffed with undereducated employees. According to WNPR.org, before the Ebola outbreak Liberia had the second-lowest rate of doctors to people in the world.

Now, Liberia has approximately 3,458 cases of Ebola crippling its health care system. It’s no wonder that the virus is ravaging these counties! Hospitals are vastly lacking supplies, as well as personnel to handle the outbreak. Extreme poverty, as well as cultural boundaries (such as mourning rituals), are also at play in helping this disease spread in highly populated areas. Government involvement in the outbreak has also caused fear and distrust in many situations.

As you can see, the West African nations where the virus is spreading at a rapid pace have many, many disadvantages that one is unlikely to find in a developed community such as Dallas, Texas.

4. The Early Stages of Ebola Do Not Include Internal/External Bleeding.

When most people think of the Ebola virus they think of gory violent bleeding from all orifices of one’s body. I continue to hear people explaining Ebola as “basically just liquefying your organs.” It is so much more than that! The early stages of the Ebola virus present themselves similarly to many other diseases; headaches, fever and fatigue are all in the first stage of the disease. While things do start to get more intense in the later stages (around day 10) there is a possibility of recovery before a patient reaches these stages.

While there is currently no cure for the Ebola virus symptoms can be treated. Combating dehydration and other infections that may occur while the patient’s immune system is weakened are important steps in treating Ebola. The average fatality rate is about 50% for those diagnosed with Ebola, however this percentage has varied from 25-90% in past outbreaks.

An experimental drug called Zmapp is also being developed, however it has not been properly tested on humans for effectiveness and safety. Zmapp is currently only available in minimal quantities and has not yet been approved by the FDA.
~
~

Find out more at:

His Name is Ashoka: the Cameraman who got Ebola.

The Origins of Ebola Are Not What You Think.