Were these Men Lone Wolf “Terrorists,” or Lonely & Mentally Ill? 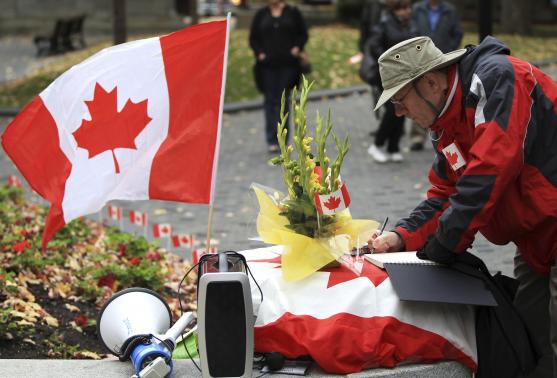 Many Canadians are still getting over the shootings last week that killed two Canadian soldiers.

The phenomena of these “lone wolf terrorists” took the government by surprise.

Yet, I am proud to say that most Canadian citizens are not over-reacting by fearing or glaring with hate at every Muslim they share a bus or class with. These pathological problems led each man to fall into a secret, on-line community and to feel to be among the few chosen Western-born jihadists willing to throw life away, as each felt they didn’t have much to lose.

Canadians, by and large, are still a tolerant bunch.

Looking at the two self-radicalized murderers, it’s clear they were desperados. Both had had periods of homelessness, joblessness and substance abuse.

Martin Rouleau, who ran over the first soldier in a parking lot with his car in Quebec on Monday, October 20, was troubled, in a rocky relationship, bankrupt and feared losing his son. He killed Patrice Vincent, a 53-year-old officer and 28-year veteran who had served with distinction. It was a senseless and brutal act, simply targeting a man in uniform.

Meanwhile, on Tuesday, October 21, CF-18 Hornets in Alberta prepared to fly to Kuwait to join the fight against ISIS.

The second gunman, Michael Zehaf-Bibeau, had had a criminal record in Quebec and British Columbia. In British Columbia he had pleaded to be jailed so that he could overcome his crack addiction, and when this was refused, he robbed so that he could be jailed. He said he felt the “devil coercing him.” In a mad dash, he shot 24-year-old Corporal Marcus Cirillo, stole a car, and invaded Parliament, gun blazing.

But it is important to look at the grievances behind these heinous acts.

These two, desperate “lone wolves” exhibited unstable behavior and a depressed sense of disenfranchisement. They found a community and a sense of purpose in being recruited online by ISIS.

In both cases, the journey to jihad involved previous trouble with the law, an identity crisis and not fitting into Canadian society—including not being all that connected to a local Muslim community. These problems led each man to fall into a secret, online community that made them feel as though they were among the few chosen Western-born jihadists willing to throw their life away for the cause, as each felt they didn’t have much to lose.

Evidently, there are at least 93 such high-risk Canadians wanting to go abroad to learn to kill in Syria and fight for ISIS. They are being recruited both in basements and in internet cafes. They blame the West for their problems, feel resentful and are inflamed by jihad to learn the weapons of war.

Until now, Canada has valued the freedoms of all its citizens and has not arrested these 93+ men for having radical thoughts, for it has been difficult to distinguish who is just venting and who is serious. But now, some surveillance is being raised along with the threat. And now it does seem reasonable to have the Prime Minister protected 24/7, to arm ceremonial guards at war memorials, and certainly to arm all guards in the House of Commons—and perhaps in provincial legislatures.

It is an understatement to say the internet can be used as a powerful weapon. And for these two men, frustrated with the dullness of their lives, joining ISIS gave them a role and a mission. Disillusioned and disappointed with their lives, ISIS attracted them.

“Once we surrender any rights, it is difficult to restore them.”

It is important to protect Canadian liberties and not to over-react. It is ironic that, while under-reacting until now to the Ebola crisis in West Africa, the Harper government is wanting to use these two tragic events to do more than just increase surveillance.

Most Canadians do not wish these acts of violence be used to justify a huge surveillance response. Preventative detention of online recruiters and dissuading desperate people from being attracted to extremist groups of any kind might be more to the point.

These two events have drawn our 35 million Canadians closer together—not in hatred, but in sadness. We are still a nation of diversity and friendship. As Tom Mulcair of the NDP said,

“These acts were driven by hatred, but also designed to drive us to hate. They will not.”

So far they have not. Recognizing where we failed these men who felt disenfranchised takes a hard honest look and a great deal of bravery.

But such a look is better than, out of fear, restraining all our liberties and retaliating.