What does a Third Grader in Philadelphia have to do with the Dharma? 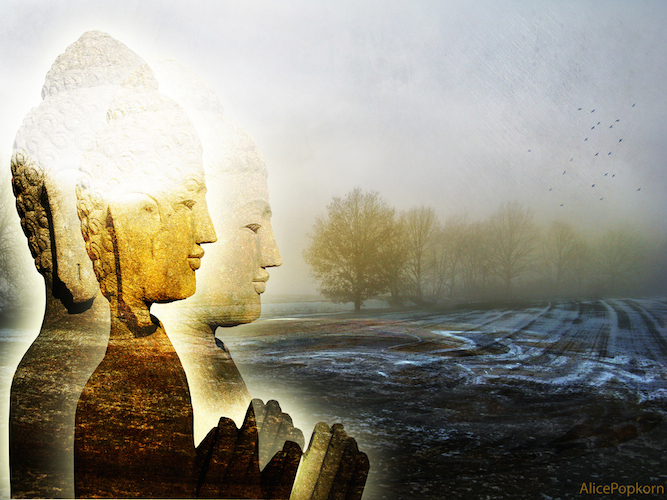 The Buddha’s teachings on the two veils.

When I was a Special Education teacher working in Philadelphia I had a student named Tamais. The reason I still remember Tamais all these years later is that he was one of the more mind-baffling and frustrating students I ever had. And he was also one of the cutest.

No one knew exactly what was wrong with Tamais, but the Special Education team had come to the conclusion that he likely had some form of fetal alcohol syndrome, which was common in the community where I worked—one of the poorer sections of the city.

Whether it was fetal alcohol syndrome or not, there was some part of Tamais’s brain that never got developed—the part that housed his short-term memory. It was kind of like the character in that movie Memento, but manifesting in the form of a small, African-American child.

His condition severely inhibited his ability to learn new skills, including reading and math. He was far behind his third grade peers, who weren’t really very skilled to begin with.

Every day I would work individually with Tamais in my office. We would go over a skill like adding numbers using blocks or memorizing a few sight words. We would work for about 45 minutes and by the end of the session he usually was grasping some aspect of what we were working on. I always felt encouraged by his progress however small it might have seemed.

And then the very next day, without fail, I would bring Tamais in to review what we had learned yesterday. And as if it had never happened, he would be a blank slate. He would have completely forgotten everything we learned just the day before. Everything. Every time. And so we would go over it again. We went on like this for a while. It was frustrating for sure, but he was such a sweet kid and I really enjoyed our time together.

The other thing about Tamais that I remember so clearly is that he loved food. He wasn’t one of those obese kids we see or hear about these days. He just loved food. He loved anything that seemed like a treat—candy, cake, a hot dog, whatever. I could understand his delight in these things. He came from a poor family and these treats weren’t available to him. He was probably pretty malnourished now that I think about it.

Anyway, being that Tamais was a third grader, our worksheets often depicted pictures of food items. Adding up one hamburger plus another hamburger equals two hamburgers, and so on. Every time Tamais would see a food item on a worksheet he would exclaim, “Ooooh!” But it was more like “oooOOOooo,” with the middle part of the “oooh” rising up in pitch.

It was super cute and it happened every time he saw a picture of food, especially cupcakes. And he would get pretty distracted. And usually it signaled the end of the lesson. The funny thing was that they were never actual cupcakes. They were just pictures of cupcakes. But he still got so excited.

Now you might be wondering at this point why I’m writing about Tamais. What, you might be saying to yourself, does a learning disabled third grader from Philadelphia have to do with the dharma? Well, according to the Buddha’s teachings it turns out we are all a little bit like Tamais.

The Buddha described two veils, or varanas, that obscure us from recognizing our awakened nature. One is the veil of cognitive obscuration and the other is the veil of conflicting emotions. The veil of cognitive obscuration is the more fundamental veil. It is the mistake we make on a continual basis, believing that we exist as some kind of permanent, independent, and unitary entity; that we are somehow separate from our experience of the world. We think there is a me “in here” that relates to a separate world “out there.” We split our world into this and that, experience and experiencer, subject and object. This is a big mistake, according to the buddhadharma.

As practitioners of meditation there comes a point (hopefully) in our practice where we start to understand this fundamental mistake both from a conceptual and an experiential perspective. We begin to see that there is no permanent, independent, unitary “me” that is separate from a permanent, independent and unitary world “out there.” We see this through our contemplation on impermanence and of shunyata (or emptiness). We also have glimpses, through our practice, of our awakened nature, free from this obscuring veil.

And then, on top of it, we see a picture of our version of a cupcake and we say, “oooOooo.” We want it. We crave it. We feel the desire that the Buddha describes in the Second Noble Truth as the cause of our suffering. Our cupcake can be anything—a person, a material object, a pleasurable experience, a thought of the past, an identity or even a meditation experience. We decide we like something and have to have it. Or we don’t like something and it has to go away. Or we ignore it completely.

This craving or desire or attachment is what brings down the second veil—the veil of conflicting emotions. When we don’t get what we want, when we can’t hold on to what we have, when we get what we don’t want—that starts a whole chain reaction of emotional suffering and we are once again obscured from our buddha nature. We are caught—hooked.

But just like Tamais and his cupcake, the thing that we desire so badly or have such aversion to, or ignore completely—it’s not actually a cupcake—it’s just a picture! In the same way we mistake our self to be permanent, independent and unitary, the objects of our perception are also lacking in permanence. They are also dependent on the mind which perceives them. They are only pleasing or displeasing based on our perception of them in that very moment. What is pleasing one day could be very displeasing the next.

The whole thing is dependent on causes and conditions. It’s just a projection. It’s just a picture of a cupcake and yet we get so excited, just like Tamais. We get thrown around by our emotions, the veil comes down and then the lesson is over, just like it was for Tamais. There’s no more learning happening at that point.

So what do we do about this problem? What can we do about these two obstructing veils? Well, luckily for us we don’t have fetal alcohol syndrome like Tamais. We may have some form of adult alcohol syndrome, but that’s another story. We are fortunate enough to have a mind that functions and the capacity to keep practicing meditation. To familiarize ourselves over and over with these two veils. To see how they manifest on the cushion and off. To see how and when they come down and to begin to see through them. To take those moments when they lift and try to remember. Over and over we see and then we forget. But we can keep meditating. We can train in remembering. We can make remembering our way of life.