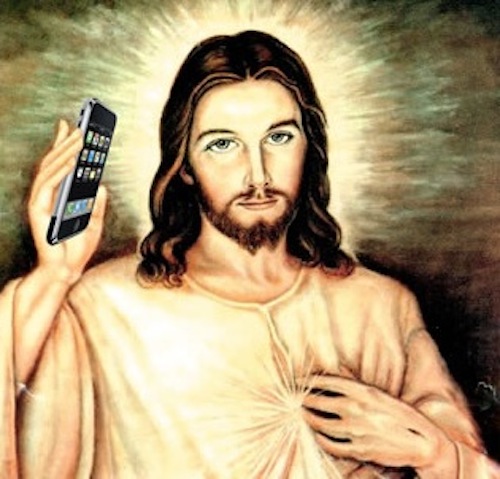 If Jesus and Paul were alive today, Paul would surely insist that Jesus have a social media strategy.

But Jesus would not likely be so organized. My guess is that he would just post spontaneous love letters to the world but they would not be random. Rather, Jesus would tell us exactly what we all need to hear.

And it would resonate so deeply that everything he said would go viral and it would turn the world upside down.

Of course, Jesus may not have been all that special—just another major spiritual teacher who happened to be in the right place at the right time, with the right people to expound upon and embellish his life.

But assuming Jesus was all that, possessing great insight into what exactly the world needs and the ability to make himself the vessel through which it is realized, what would Jesus post?

This question challenges us to draw out our highest, most integrative intuition about what the world really needs to hear.

And it contains an assumption that would not have been possible at the time of Jesus or Muhammad or even Gandhi. We can actually speak to the whole world and expect that, if our message is powerful enough, it will be shared across cultures within weeks.

There are many teachers spreading healing words of love today.

Everything Jesus said is already available online, even specially translated in evangelical editions for the intellectually and poetically challenged.

What we need is the rights words, said in the right way, at the right time and for the right audience.

Achieving this sort of Golden Mean calls for more than just constantly remembering some high teaching or attuning ourselves to some spiritual state of mindfulness.

Saying what the world needs to hear requires that we be able to feel empathy for all the people and beings of the world, to rest in the suffering and pain of billions of people, to intuit the outcomes of dozens of different global challenges, to suspend fixation on our own pet issues, to bring justice to the afflicted and to bring into resolution the experiences that will be necessary to transform the world.

Jesus would probably not post that he walked on water today, nor would he post pictures of his latest healing.

He probably would not post pictures of children killed in war. Nor would he post photo quotes or platitudes on love.

Rather, the Jesus I imagine would post something that would bring everything into focus, that would open our hearts, while bringing justice and a sense of resolution.

Jesus would post a message that would bring love and understanding between Israelis and Palestinians, while calling for an end to the occupation.

Jesus was also a Palestinian whose people were occupied by an oppressive foreign power.

Jesus would welcome into his arms former members of ISIS, the bankers on Wall Street and the victims of genocide.

He would not shy away from addressing the root causes of violence, both the immediate causes and the state of mind that perpetuates it. He would consider the future and concern himself with the fate of not just the unborn and he would concern himself with the effects of the decisions we make today on future generations.
Today’s spiritual teachers all too often fail to get their hands dirty in this way. They fail to feel for the world and to intuit what the world really needs.

Rather they give us stock messages that rarely translate well into real socio-political transformations. Thus, when spiritual practitioners enter the world of politics, they often do so with great love in their hearts and loopy conspiracy theories in mind.

I honestly don’t know what Jesus or Buddha or Muhammad would post.

But I can envision what it would be like to send out messages that might turn the world on its head.

It is clear to me that almost no one, with the exception of an occasional Dalai Lama or Pope Francis or Desmond Tutu, is willing to engage on this level.

What I am hinting at here is that we should not wait for Jesus but rather make use of social media to turn the world on its head and make what we say matter.