Why I Don’t Feel Grateful for My Broken Heart. ~ Diane Hopkins I just can’t feel gratitude for my life right now.

I felt grateful yesterday and I’ll probably feel grateful tomorrow but today I feel a burning emotional pain in my heart and no amount of positive reframing is going to help.

Nothing is going wrong in my life but I feel my heart is being ripped open as if it’s being broken for the first time.

Maybe it was having dinner last night with two men that I’d had feelings for and both rejected me. Yes, that was probably it. Or maybe it was catching up with a girlfriend for coffee this morning and seeing her hit it off with a cute guy I’d had my eye on.

Yes, that was probably it.

Or maybe it was bumping into a man I have a strange unexplainable love for unexpectedly at the airport two days ago only to find out his girlfriend was picking him up.

Yes, that was probably it.

I realize there is a pattern going on here in my love life and yet despite the years of intense self-reflection, inner work and emotional release, I still have not healed the original wound that has me feeling such heart-ridden despair. I’m sure at a point in the future—maybe tomorrow even—I will see the whole situation from a higher perspective and not be so bogged down in it. But for now my heart hurts and no amount of reading positive affirmations or ecstatic dance is going to shift it.

I get the impression it comes from my first heartbreak that I never really allowed myself to feel fully. While other girls were crying their hearts out into ice-cream and rom-coms, I was being the ice-queen pretending not to care.

As a sensitive child I learnt from an early age how to neatly stuff down and suppress my emotions. I was fifteen and the first guy I liked fell in love with my best friend. Him and I were set up on a blind date by mutual friends but my girlfriend insisted we make it a group thing and they happened to hit it off. It was the classic story of teenage heartbreak—the other girl gets the guy.

It was agonizing having to watch their love story play out in front of me.

Normally when someone doesn’t return your affections you don’t have to see them all the time locking lips with another girl but in this case I did. I pretended I wasn’t too bothered by the whole situation. It felt like there was nothing I could do.

Unless I wanted to give up my best friend and our shared group of friends, I would simply have to suck it up and watch on.

An eleven year relationship and marriage aside, most of my love interests before and after have played out in this same fashion. There has been an initial connection or interest and then the man falls in love with another girl and usually that man stays in my life so I get to watch his affections for another and feel jealous and uncomfortable.

Life seems to like rubbing my failures in my face. It has brought me three different examples that trigger up the same wound within a matter of days. It’s like the Universe is saying ‘don’t try and avoid this, I’ll track you down and serve your wound to you with your morning coffee wherever you go’.

At an intellectual level I know this is somehow serving me; that having my core stuff triggered up is what might be required for me to release the old hurts I’ve held onto.

But for today I don’t care. For today I’m incredibly ungrateful for having to experience this pain.

I’ve noticed it is a useless endeavour trying to force a feeling of gratitude when I’m in a deep state of pain. It’s like adding a further layer of guilt on top of an already bad situation. When I’m in this state it’s best to make a break for it and isolate myself so I can properly deal with my emotions. Crying helps and talking about it often doesn’t.

The most annoying kind of friend tries to tell you to appreciate your pain because they feel too uncomfortable with an open display of intense hurt. But the reality is that most people can’t act as a clear sounding board for such deep wounds, partly because they have their own set of wounds and partly because they have been conditioned to try and fix other people’s emotions. If there is one thing I know for sure, it’s that you can’t convince someone out of a core wound.

Believe me, I’ve tried all sorts of things to wish them away. We can find temporary relief from re-framing the situation with positive thoughts and alternative perspectives but the really juicy, deep wounds will always pop up at inconvenient times for proper resolution. Adding a false layer of positivity or gratefulness to a deep wound is only ever going to delay the inevitable.

I know I’m going to have to feel the fullness of this wound before it leaves me completely.

Because I can’t have this pain in my heart and still be open to love.

And it is becoming increasingly clear that ignoring it is not making it go away. Life will just keep bringing me more and more intense situations to trigger that original heartbreak. I know I’m going to have to surrender into the pain to let it pass through me and break the chain of this pattern. When this will happen I don’t know.

But in the meantime I’m probably not going to feel grateful for it. 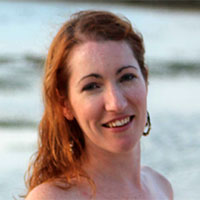