The Only Way to Live Forward. {Book excerpt} 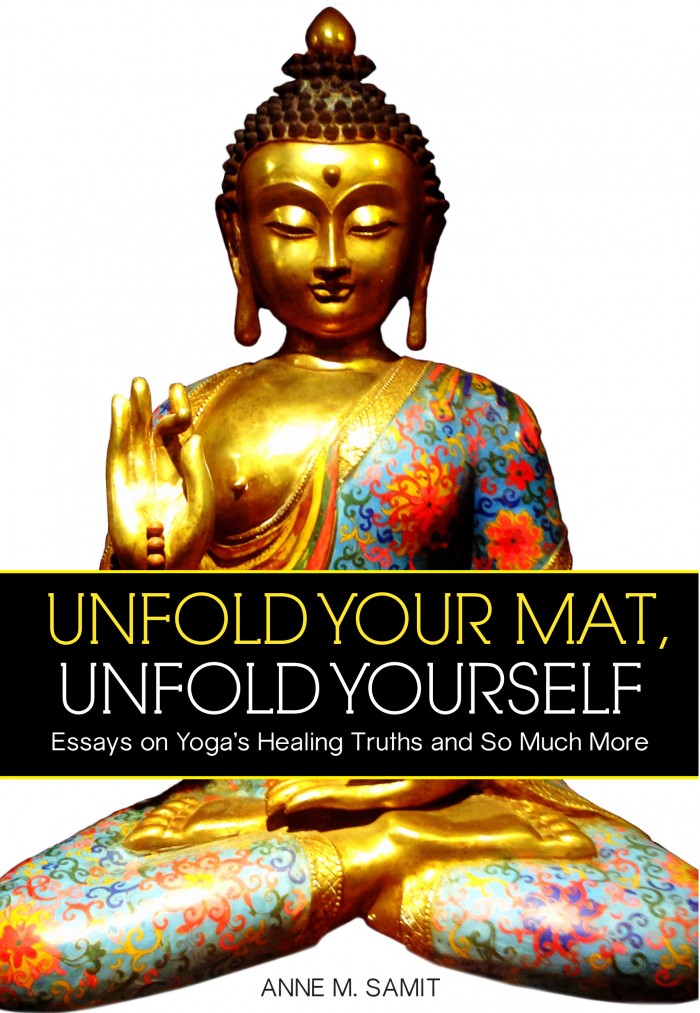 The following is an excerpt from the author’s debut book, Unfold Your Mat, Unfold Yourself: Essays on Yoga’s Healing Truths and So Much More.

Changes in latitudes, changes in attitudes, nothing remains quite the same.

At first I fit yoga into my life. Now I fit my life into yoga.

Once upon a time, I never even did yoga. That time is hard to imagine now. What did I do before? I fill so much of my time with yoga that there’s hardly any leisure time left in a day, and I wonder what filled it until now.

Change is challenging for me and so taking up something like yoga, and doing it as frequently as I do, is something I would never have anticipated. I usually like to do the same thing I’ve always done, even if now I can’t remember what exactly that was.

I am a creature of habit, as my son likes to point out. I find a restaurant I love, and it’s the only place I want to go. I’m at a job where lots of people come and go, but I tease everyone that I will be the last one standing. I’m the only one of my siblings who has remained local and, in fact, I raised my children right down the street from where I grew up.

Nothing stays the same, Mom, my daughter tells me.

She already knows this as a young adult, but I’ve learned this much later. And I’m not sure how this is so, because not much has ever been status quo.

At yoga, I’ve learned that we have a front body and a back body. I never knew about this until I was instructed to breathe into my back body. Even though I might have been asking the obvious, I had to be shown where it was, because I didn’t even know I had one. The part I breathe into is behind my heart, and when I breathe in this direction, I can expand the area on my back between my shoulders. I can do the opposite, too, and breathe into my front body, filling my lungs and lifting my heart in this way.

I just have to know in which direction, and then all I have to do is breathe.

How else to adapt to change? None of us can remain the same, and I don’t think we’re supposed to, either. I used to think the goal was to get settled into whatever the most settled place would be, but now I know different. Even my practice changes, from where I practice, to how I practice, to when I practice. Change happens and I think, while not always easy, it’s best to do as I do in the practice and go with the flow. It’s the only way to stay in the game.

It’s the only way forward.

So now what I do is return my daughter’s wisdom, and when she wants to know what’s next, I reassure her with my own experience that it’s not always necessary to know. All that’s needed is to know that something is next, and whatever that is can be discovered upon arrival.

We were in Pigeon pose the other day, and I lay there in a heap after an hour of practice. I welcomed the rest, and I breathed into my back body. This is a pose in which we are encouraged to let go, and if the instructor says something at this point, it’s usually along those lines.

Let go of something, he said. Only you know what that is.

Then he made a few suggestions, one of which caused me to raise my head from my heap.

Maybe you have a 40-year-plan that you have to let go, even if you don’t know what’s next.

I think he was talking to me! Just becoming a yogi was a big change, and if I think about it, that transformation should prove to me that I’m able to adapt to other changes, too. It just takes me a little while to settle into something new as I have a tendency to look behind more than I do ahead.

Life can only be understood backwards; but it must be lived forwards.

These are not the words of the yoga instructor; rather, they are those of the Danish philosopher and theologian, Soren Kierkegaard. I’m guessing that he knew he had a front and back body, too. He wrote these words in the 1800s, but I find them to be true today as I do my best to follow them, so I can move my practice forward and move myself forward, too.